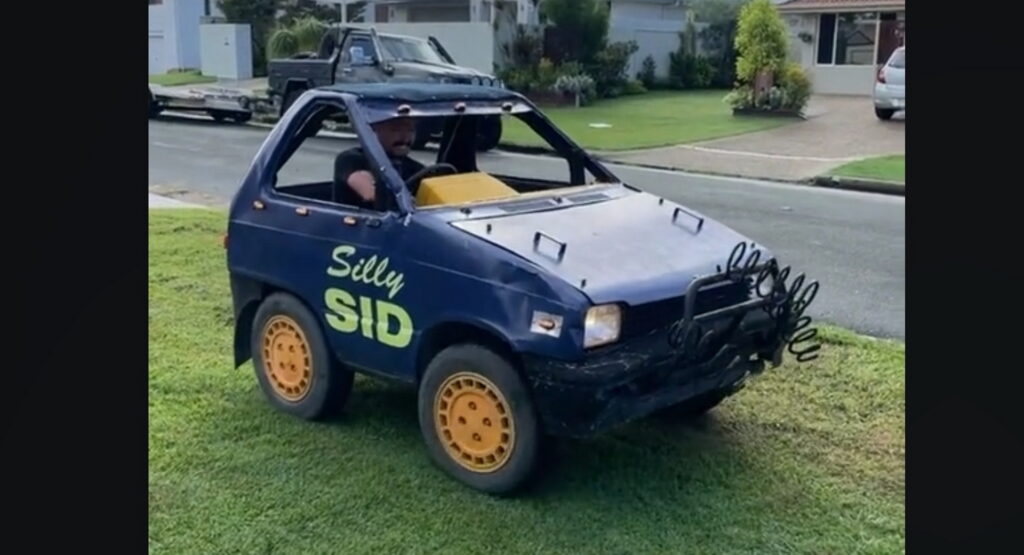 In the latest installment of our ongoing series, “Don’t Sign Your Crimes,” Australia’s Sammy Eyles has been charged with multiple offenses after driving an extremely shortened wheelbase car, dubbed “Silly Sid,” on public roads.

Eyles runs the Built Not Bought YouTube channel, as well as a number of associated social media channels including on TikTok and Instagram, which produce automotive entertainment content. According to Queensland police, as part of those activities, the 29-year-old bought a car that had allegedly previously been in the circus whose front and back wheels were just inches apart.

On TikTok, he posted videos of the car being driven on public roads, going through a McDonald’s drive through, and, most alarmingly, rolling over into a ditch. As a result of those videos, a number of which included Eyles being pulled over by the police after ordering fast food, authorities opened an investigation into Eyles’ online activities.

On September 30, a search warrant was executed of Eyles’ property in Image Flat, and officers seized several items. The police department says that it grounded several vehicles for “allegedly being grossly defective and non-compliant.” The clown car and one other vehicle were seized.

In a video, Eyles admitted that he had filmed he and his friends driving Silly Sid on public roads and said that police took hard drives, computers, phones, and cameras, as well as the two vehicles during the September 30 raid.

“Obviously, I fucked up—I Shouldn’t have driven the car on the road. I was happy to take the fine, but then they kept digging, and digging, and digging,” said Eyles, per Australian’s News. “All my cars are off the road because they’re all bloody dangerous, apparently. You gotta just be a bit more careful about what you do online—you’re in the spotlight all the time.”

In addition, highway patrol investigators then went to the addresses of nine people who are alleged to have participated in the videos, and issued 70 traffic infringement notices, which amount to $27,800 AUD ($18,652 USD at current exchange rates), as well as a combined 99 demerit points.

“Putting not only your own life at risk but those of your mates for the sake of social media notoriety is childish and selfish behavior,” said Sunshine Coast District Superintendent Craig Hawkins in a statment. “Sharing these antics with his large contingent of online followers has come at a significant financial cost, both in fines and the loss of vehicles.”