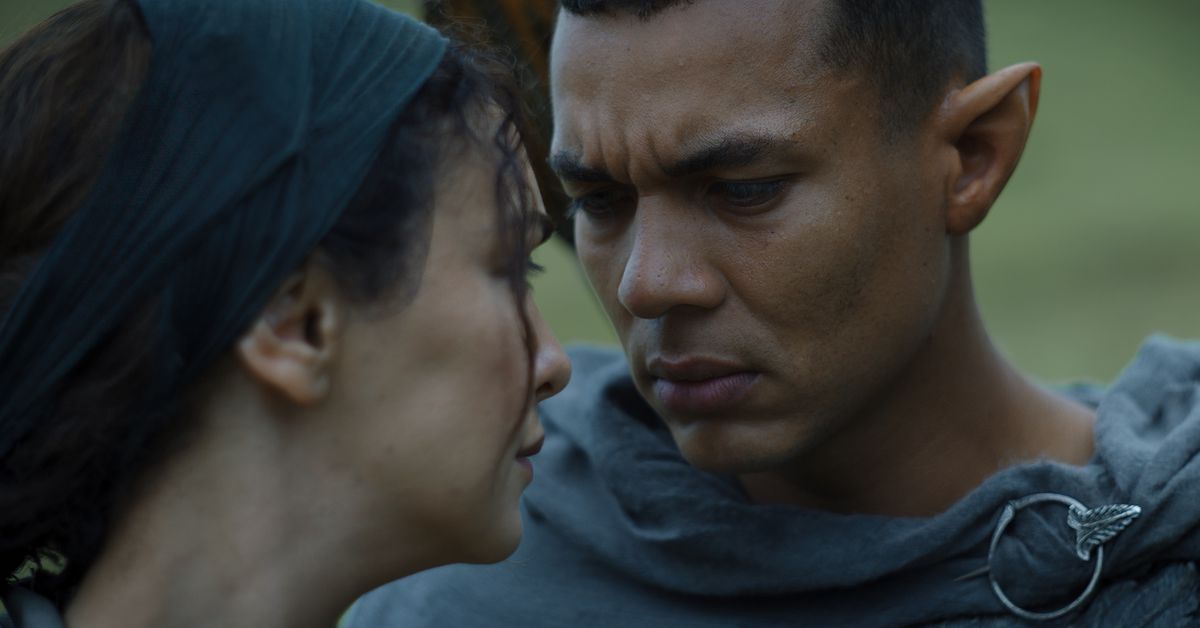 Early on in The Lord of the Rings: The Rings of Power, viewers are privy to a conversation between Arondir — an original character invented by Amazon — and his friend, in which the latter discusses the tragic history of romance between elves and humans. In his eyes, Arondir is foolish for having allowed himself to fall for Bronwyn, a human healer from the nearby village of Tirharad (also invented for the series).

The thing is, he’s sort of exaggerating. While there aren’t many examples of relationships between Elves and humans (at this point in the timeline, there have been precisely two) to categorically say that they ended badly is a little disingenuous. Messy? Sure. Dangerous? Absolutely! But ultimately tragic and not worthwhile? Not so much.

The most famous example of a human falling in love with an elf in The Lord of the Rings is, obviously, the tale of Aragorn and Arwen. If you’re even remotely interested in Tolkien’s world, you’ll already know the gist: Aragorn loves Arwen, her dad says “If you want to marry her, you better become the King of Gondor and Arnor,” Aragorn does that after the War of the Ring, and then Elrond sails home to Valinor, never to see his beloved daughter again.

That last part is a bit sad, but given that Arwen chooses a mortal life — which is something we’ll elaborate on shortly — she and Aragorn get to spend the rest of their time in Middle-earth together, which is actually quite lovely. Anyway, that happens in the Third Age, long after the events of The Rings of Power. The two relationships that Arondir’s pal is referring to are those between Beren and Lúthien, and Tuor and Idril.

The first union between humans and elves occurs in the First Age, when the mortal man Beren meets the elven princess Lúthien. Interestingly, this is one of the oldest stories in the entire legendarium, having been written just one year after Tolkien returned from fighting at the Battle of the Somme in World War I — almost four decades before The Fellowship of the Ring would be published for the first time.

Beren and Lúthien is such an important story, in fact, that it was posthumously expanded into an entire book, arranged by Tolkien’s son and indefatigable editor, Christopher. To summarize the events of the book is to do it a disservice, but for the sake of brevity: Beren meets Lúthien and they fall in love. Her father, King Thingol of Doriath, disapproves, and sets Beren the impossible task of retrieving a Silmaril from Morgoth (if you thought Sauron was bad, this guy used to be his boss).

After much toil, they return to Doriath and receive a hero’s welcome, despite failing to retrieve the Silmaril. Years later, the wolf Carcharoth — in the service of Morgoth himself — journeys toward Doriath, at which point Beren sets out with a party to finally complete the Quest of the Silmaril.

This time, he receives the jewel and hands it to Thingol, but not before sustaining a fatal wound. Beren dies, but his soul waits for Lúthien in the Halls of Mandos. She does some weird spirit stuff and somehow gets an audience with the Valar Manwë, who brings news of her predicament to Eru Ilúvatar — literally God. At this point, she receives a choice: Go to Valinor to live on as an elf for all eternity, or have Beren returned to her on the condition that they both become mortal. She chooses the latter option and becomes the first elf to die of old age in Middle-earth (Arwen becomes the second in the Fourth Age, almost 7,000 years later).

That’s not so bad, right? Against all odds, Beren and Lúthien end up together after becoming heroes, and somehow manage to carve out time to quietly live out the rest of their years with each other. “The history of elves and humans dating is so terrible!” says Arondir’s friend. But like… not really.

The second union between elves and humans also comes about in the First Age, this time centering on the human Tuor and the elf Idril. They face way less judgment than Beren and Lúthien, to the extent that Idril’s dad — who is also a king — basically sees Tuor as a son. He doesn’t send him to certain death to gain his blessing. He just says, “You seem like a nice guy, I’d love for you to marry my daughter.” In fact, just about everyone in the hidden elven city of Gondolin loves Tuor.

Except Maeglin, a weirdo who was so obsessed with Idril and jealous of Tuor that he sold the entire city out to Morgoth, instigating the Fall of Gondolin (which was also expanded into a full book by Christopher Tolkien).

The whole “Their love caused the sacking of a historically significant city” angle could probably be construed as “It ended badly” if their story ends there. But it doesn’t. Together, they escape Gondolin with all of the survivors and rebuild their society at Sirion. They even have a child: Eärendil, who will grow up to become a key figure in the legendarium. Eventually, they get bored with Middle-earth and sail west to Valinor, where Tuor — still beloved by the elves — becomes the first man to ever be granted immortality among them.

Wow, so sad. That ended so badly. Ilúvatar forbid that happens to Arondir and Bronwyn.

So, at the time of The Rings of Power, when there have been just two unions between humans and elves… I mean, actually, Arondir and Bronwyn’s odds are pretty good! The other two couples ended up being really happy together. In my eyes, Arondir’s friend is just really jealous about the possibility they won’t get to hang out as much anymore, which is pretty toxic. What a bad friend.

All of that being said, the fact Arondir’s pal brings any of this up at all is kind of foreboding. Misfortune probably is looming on the horizon, especially when you consider the very Nazgul-y sword Theo, Bronwyn’s son, finds early in the season.

So yeah, this one probably will end badly — but not because the ones before it did.

The Witcher 1 Remake Will Be Open-World, CDPR Says