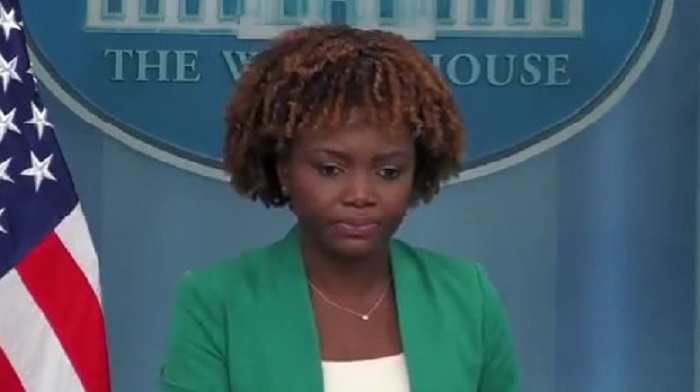 White House Press Secretary Karine Jean-Pierre on Thursday blamed former President Donald Trump for school closures during the pandemic and made the false claim that Democrats pushed to re-open them “in spite of Republicans.”

Her comments came during a press briefing in which a reporter cited a recent study showing young students over the past two years had significant declines in both reading and math.

The reporter queried Jean-Pierre on how the administration planned to address the “severe learning loss” and whether they should accept “any blame for not pushing schools to reopen sooner.”

The press secretary offered a response only those with significant memory loss could have bought, pointing out that “nearly all schools” were open six months into Biden’s presidency.

Jean-Pierre blames Trump for schools being closed during Covid and says schools re-opening “was the work of Democrats in spite of Republicans” pic.twitter.com/X9kQjlzvHY

Jean-Pierre’s claims are beyond outrageous and an easy example in which fact-checkers could step in and correct the record. But will they?

“We were — we were in a place where, again, schools were not open. The economy was shut down. Businesses were shut down,” Pierre continued referencing the Trump years.

“It shows you how mismanaged the pandemic was and how the impact of that mismanagement had on the — on kids’ progress and academic wellbeing.”

The change as Biden entered office, of course, was a product of an election in the rearview mirror, when news networks no longer needed the pandemic to get rid of Trump.

When death countdown clocks were removed from newscasts. And businesses and schools were slowly re-opened so the economy could recover under the new president.

It was never because Democrats wanted schools opened. If anything, they were beholden to the teacher’s unions who constantly pushed for keeping kids home, destroying their education and social skill-building for years.

Of course, Democrats are now trying to take credit for Republican decisions that proved to be right. Never forget, the teachers’ union literally sued @GovRonDeSantis for putting students back in the classroom. What changed? https://t.co/YIIU4440vi

The Political Insider predicted this false narrative that Democrats were responsible for restrictions being lifted on schools and businesses would come to fruition. And here we are.

Reality dictates something completely opposite of what the White House is trying to sell here.

“We’re very much going to put pressure on governors — and everybody else — to open schools.”

Nearly every American with common sense recognized what school closures and COVID restrictions were doing to the education of our children.

But Democrats and teachers unions who simply wanted to work from home rather than do their jobs opposed having schools opened did not.

President Joe Biden, Pierre’s boss and the person she speaks on behalf of on a daily basis, campaigned on keeping schools closed for as long as possible. Or at least until he won and could take credit for their re-opening.

This ad from the DNC focuses on Trump’s support for reopening schools and accuses him of “risking teachers’ and parents’ lives.”

While Trump was threatening schools with withholding funding if they refused to reopen, Biden was telling school children: “He just wants schools to open because he’s afraid if they don’t, it will hurt his re-election chances.”

At a presidential debate, Biden mocked Trump for suggesting transmittal rates in schools are low and that he wanted schools opened because “the cure cannot be worse than the problem itself.”

“During last week’s debate, when President Trump suggested he’s eager to reopen schools, Joe Biden mocked him, sarcastically rephrasing his words (and doing his best to scare folks): “All you teachers out there, not that many of you are going to die. So don’t worry about it.””

It was Democrats and the media who insisted under President Trump that any suggestion of opening up schools and businesses meant you wanted to kill seniors and children.

It was this administration that – even this very year – tried to keep forcing school kids to wear masks despite the evidence that they were only harming them.

Dr. Leana Wen, a medical analyst for far-left news network CNN, who at one point argued unvaccinated people shouldn’t be allowed to leave their homes, admitted the damage being done by masking children in schools.

“Masking has harmed our son’s language development,” she confessed.

Many on Twitter have asked–how did I go from being extremely cautious with #covid19 precautions for nearly two years to now resuming pre-pandemic activities, including not masking my young kids at school?

I explain in this @postopinions column 🧵: https://t.co/3UGUxWvCH7

When Republican governor Ron DeSantis attempted to re-open schools in Florida, he was slapped with a lawsuit from the state’s largest teacher’s union.

And when DeSantis tried getting mask mandates removed from schools – you know, the same masks that CNN’s medical analyst said stunted her kid’s development – President Biden sent federal funds to those who defied him.

President Biden, the DNC, blue state Democrats, liberal teachers unions – they all wanted to keep schools closed as long as possible. It was Trump and Republican leaders who fought for your child’s right to a safe and proper in-class education.

Helena Bonham Carter Stands by J.K. Rowling, Says Backlash Has Been ‘Taken to the Extreme’