Weekend Takeaways: NHL’s ‘Division of Doom’ bound to leave one team out of playoffs 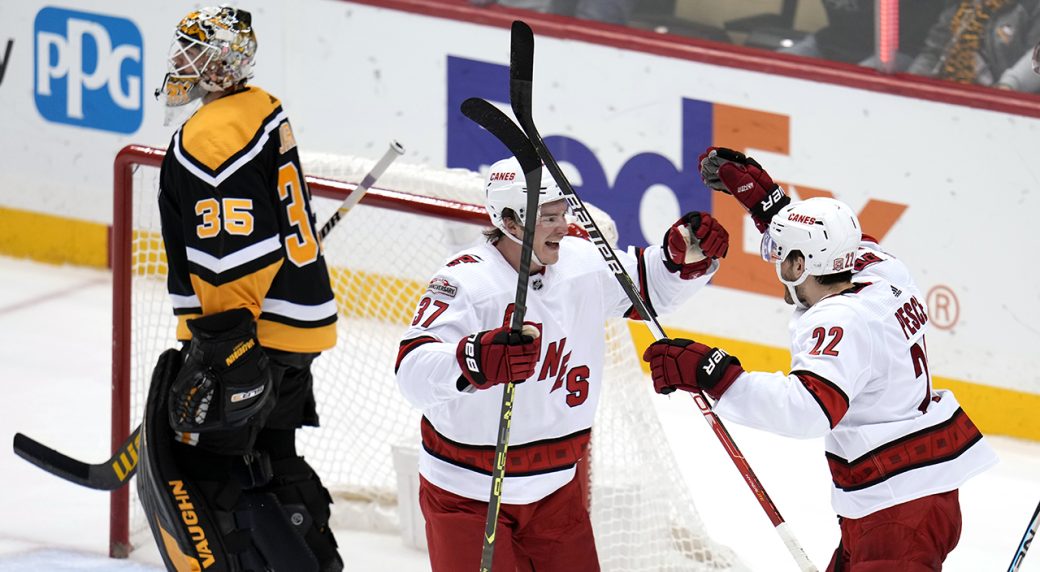 On Sunday afternoon, a Pittsburgh Penguins team gunning for its eighth straight win was stopped by a Carolina Hurricanes squad that, with the 3-2 victory, has now racked up five consecutive W’s of its own.

Meanwhile, the New York Rangers were in action that same day and scored seven goals in their seventh straight win, blasting the Blackhawks out of the rink in Chicago.

If the World Cup (rumour has it there were some exciting non-hockey sports played this weekend) always has its Group of Death, the Division of Doom in the NHL right now is most certainly the Metropolitan.

NHL on Sportsnet NOW
Get NHL LIVE included with a subscription to SN NOW PREMIUM and stream over 1,000 games blackout-free, plus the 2023 Stanley Cup Playoffs.
CHOOSE PLAN

Take a peek at the league’s four divisions at this moment and you’ll see the space between first to sixth place is 18 points in the Atlantic; 16 in the Pacific and 14 in the Central. The Metro is now co-led by the New Jersey Devils and the Hurricanes after Carolina’s third-period comeback versus the Pens and the gap between the penthouse and the sixth-place Washington Capitals is a mere eight points.

The Canes, Penguins, Caps and Rangers rank first, second, seventh and ninth in the league in points percentage since Nov. 21. Four of the top eight teams during that same month-long stretch in terms of expected goals percentage are Carolina (first), New Jersey (fourth), Pittsburgh (seventh) and Washington (eighth). So even though the Devils’ results have levelled off — they were downed 4-2 on Saturday by the Florida Panthers — their underlying numbers remain strong.

In every other division, at least one of the top six clubs has a negative goal differential (the Pacific has three); in the Metro, all six are on the positive side of the ledger.

This tweet from the always-cheeky Canes account about their guy Andrei Svechnikov (1-1-2 vs. Dallas on Saturday) could apply to the entire division right now:

In addition to being a competitive group, the dynamics at play also make things compelling. The Caps and Penguins are the cagey vets unwilling to leave the party; the Rangers and Canes need playoff success to validate what they’ve done in recent regular seasons and the Devils are the hot-shot new guys who believe it’s their time to reign.

And while it hasn’t been smooth sailing all year for all six of these squads, you can make a case they should hold pretty steady the rest of the way. There’s suddenly some optimism about Tom Wilson and Nicklas Backstrom returning to the Caps; the Islanders feel like sneaky stalkers on the trade scene after being quiet all summer and, who knows, the Rangers might put one of the Blackhawks they embarrassed on Sunday — some three-time champion named Patrick Kane — in their lineup before the spring.

We know, at most, the Metro can only send five representatives to the post-season dance. The way things have gone lately, it seems like a pretty good squad is going to be left out of the party.

• Charlie Lindgren picking up the 5-2 win versus former Capital and current Toronto Maple Leaf Ilya Samsonov on Saturday is the perfect excuse to examine how peculiar Washington’s crease situation is. How often can a squad say goodbye to two goalies — Samsonov and Devils starter Vitek Vanecek — who soar with their new squads and kind of not bat an eye because they ink the reigning Cup-winning goalie in Darcy Kuemper and a 28-year-old southpaw in Lindgren who made a total of 11 NHL starts in the four seasons preceding this one, but is 6-1-0 in his past seven starts (with Kuemper sidelined) and sports a .938 save percentage in that time. I mean, goaltending…am I right??

• We carved out some love for veteran players doing great things in this space last Monday, but maybe we didn’t do enough to elevate the achievements of Mats Zuccarello. The left winger scored another one for little guys everywhere this weekend, netting himself six points in two Wild wins, including a hatty Friday night versus Chicago and a 1-1-2 showing in a Sunday victory that ran Minnesota’s win streak to five and halted Ottawa’s at four. The 35-year-old is riding a 10-game point streak in which he has seven goals and nine assists and, get this, is playing at a career-best clip of 1.16 points-per-game, sightly eclipsing the personal best he established last year at age 34 (1.13). In fact, his best four seasons have come after the age of 31. What is in that Norwegian water?

• The annual roster freeze goes into effect on Tuesday and, once it lifts in a week, we might start to see some action. And, no offence to Bo Horvat or Patrick Kane, but Jakob Chychrun is the OG when it comes to contemporary trade rumours. Chychrun has been openly available for about 12 months at this point and though injuries have complicated things in the past, he’s back in the Coyotes lineup and quietly producing at a strong rate. After a disappointing 21-point showing in 47 games last year, the 24-year-old blue-liner has 12 points in 13 contests this season after returning from a wrist injury, including three assists on the weekend in a win over the Islanders and a loss to Buffalo. Maybe now that he’s back showing his best work, Chychrun can finally get a ticket out of the desert.

• Speaking of the Sabres, Buffalo is officially your goals-per-game leader right now at 3.97 after beating the Coyotes 5-2 in Arizona on Saturday. It’s a process, but there is clearly a growing list of fantastic pieces on this squad.

Lukas Dostal did it all versus the Oilers on Saturday, making 46 saves for the Ducks in a 4-3 win. Might the 22-year-old be just the latest goalie find for an Anaheim club that’s been better than anybody drafting and developing tenders in the past 20 years? The win also gave Anaheim two straight regulation-time victories; one more than it had ALL YEAR in 30 games prior.

1. Toronto Maple Leafs (19-7-6) Conor Timmins averaged 14:41 of ice in his first three games with the Leafs and 19:36 in the most recent three. He’s also got six points in six games with the Buds after picking up a helper in the losing cause in Washington on Saturday.

2. Winnipeg Jets (20-10-1) What a year for Josh Morrissey. The 27-year-old has established a new Jets record for defencemen with points in nine straight games thanks to two helpers in the 3-2 loss to Seattle Sunday night.

3. Edmonton Oilers (17-14-1) Guys, Connor McDavid is on pace for 72 goals after scoring Saturday night versus the Ducks. Are we sure we’re talking about this enough?

4. Calgary Flames (14-12-6) Calgary snapped its five-game losing streak Sunday night and the line of Elias Lindholm between Dillion Dube and Tyler Toffoli stayed hot as all three guys hit the back of the net.

5. Ottawa Senators (14-15-2) Old friend Filip Gustavsson halted the Sens’ four-game winning streak in Minnesota on Sunday, but there’s no doubt Ottawa has been playing much better of late.

6. Montreal Canadiens (14-15-2) The Canadiens suddenly have one regulation-time win in their past eight outings and are about to embark on a seven-game roadie that could quickly clarify exactly where this team is at in terms of competitiveness right now.

7. Vancouver Canucks (13-14-3) Some of Vancouver’s worst showings have been at home this year, including the 5-1 loss to Winnipeg on Saturday. The Canucks’ 3.69 goals-per-game on the road ranks sixth in the NHL; their 3.0 at home is 23rd.

• Alex Ovechkin can tie (and pass?) “Mr. Hockey” on Monday night when the Caps host Gordie Howe’s old team, the Detroit Red Wings. Ovi is still sitting on 800 goals, one behind Howe’s 801.

• Two of those hot Metro teams meet Tuesday when the Rangers visit the Penguins in Pittsburgh.

• Friday is your last day of NHL action for three days and the league is going out with a banger, as 26 of 32 teams will be in action. 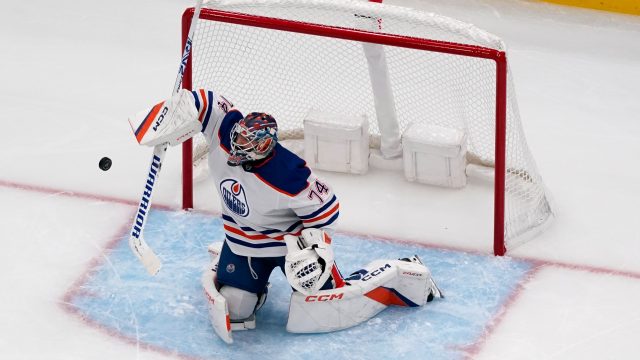 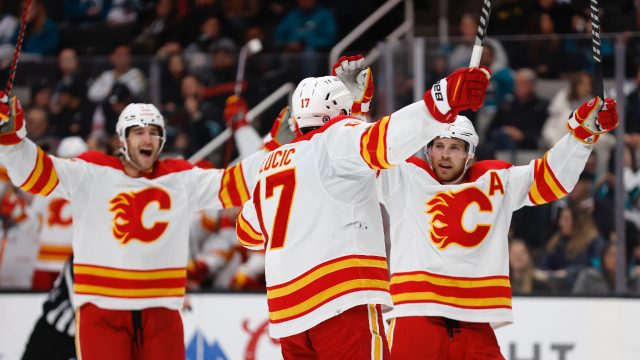