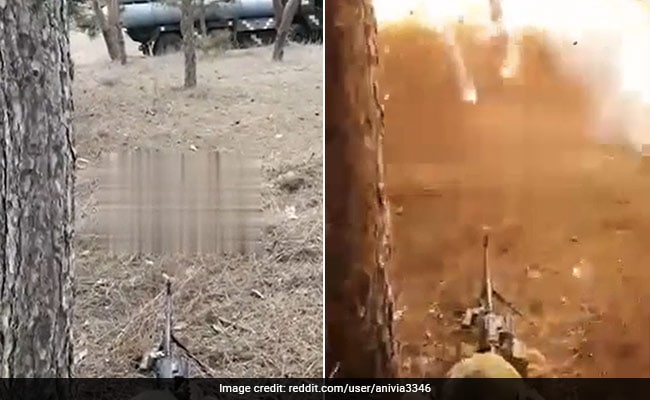 The Russia-Ukraine war has been going on for more than six months now, resulting in the death of thousands of people. It has also made millions homeless and destroyed dozens of cities. Recently, a terrifying footage has emerged from the Ukrainian frontline that shows a Russian soldier destroying a missile launcher from a very close distance and what happens next can very well be imagined.

In the video posted on Reddit, the soldier can be seen lying down in camouflage clothing and aiming his PKM machine gun and within seconds a powerful explosion follows.

The clip shows the Russian soldier aiming at the S-300 Anti-Air Launchers sitting a few yards away. He took a few seconds to compose himself and soon after pulled the trigger of his PKM machine gun, in the hope to destroy the powerful air launcher but in split second the missile launcher exploded and the large flame blasted toward the soldier and the person holding the camera.

There is no official information about the Russian soldier and his condition after the explosion.

According to a Reuters report, the Russian forces have seized areas of the south, including those on the Black Sea and Sea of Azov coasts and large tracts of the provinces of Luhansk and Donetsk that make up the eastern Donbas region.

The war has killed thousands of civilians, forced more than a third of Ukraine’s 41 million people from their homes, left cities in ruins and shaken the global economy, creating shortages of essential food grains and pushing up energy prices.

D&D’s Dragonlance campaign is excellent, but the physical products disappoint