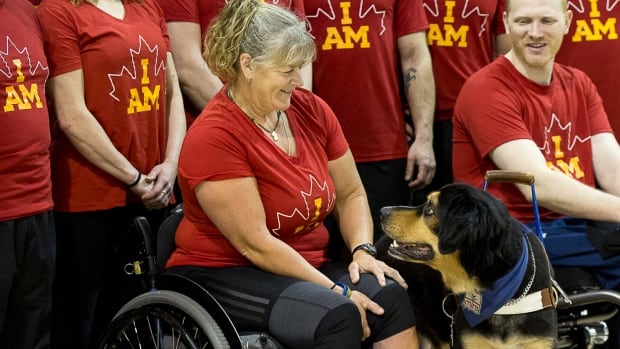 Veterans Affairs can find nothing in its files to suggest that a former member of the military — a paralympic athlete — was offered medical assistance in dying by a department employee, the department’s deputy minister told a House of Commons committee on Monday.

Paul Ledwell told the veterans affairs committee that the department has examined over 400,000 individual files as part of its internal investigation of allegations that veterans have been offered — or have been pressured to accept — assisted deaths.

On Thursday, Christine Gauthier — a paraplegic former member of the Canadian military and a former paralympian — shocked MPs on the committee by testifying that the Department of Veterans Affairs offered her, in writing, the opportunity for a medically assisted death and even offered to provide the equipment.

Ledwell said the department conducted a specific review of Gauthier’s case file in response to her testimony.

“There’s no indication in the files in any correspondence, in any notation, based on engagement with a veteran of reference to MAID,” Ledwell told the veterans affairs committee.

“If the veteran has material, any indication of that, we again — as we’ve invited for other veterans — would welcome seeing that, reviewing that and making that part of our investigation.”

Gauthier, who competed for Canada at the 2016 Rio de Janeiro Paralympics and the Invictus Games that same year, spoke before the same committee last Thursday. Testifying mostly in French, she said the veterans department offered her assistance in dying. She also claimed to have it in writing.

The committee asked for a copy of her information. In subsequent media interviews, Gauthier said that while the offer of medically assisted death was made verbally in a 2019 conversation with a Veterans Affairs employee, she made a note of it in her personal files, which she agreed to share with the committee.

Veterans Affairs Minister Lawrence MacAulay told the committee last month that an internal investigation found that one department employee is believed to have inappropriately counselled as many as four veterans on the possibility of ending their lives with a doctor’s assistance. The matter has been turned over to the RCMP for further investigation.

MacAulay stuck to that line before the committee on Monday, saying the department is still only aware of four cases. He urged other former members of the military who might have been similarly pressured — including Gauthier — to contact the department directly so they can be included in the ongoing investigation.

Conservative MP and committee deputy chair Blake Richards said he’s aware anecdotally of eight separate complaints from veterans. Some of those veterans, he said, are reluctant to trust the department because of the way they’ve been treated in the past.

Gauthier, a paraplegic who said she’s been battling the department for five years to obtain a wheelchair ramp or lift, last week testified that she wrote to both Prime Minister Justin Trudeau and MacAulay to express her concerns.

On Monday, the minister flatly denied ever having heard from her.