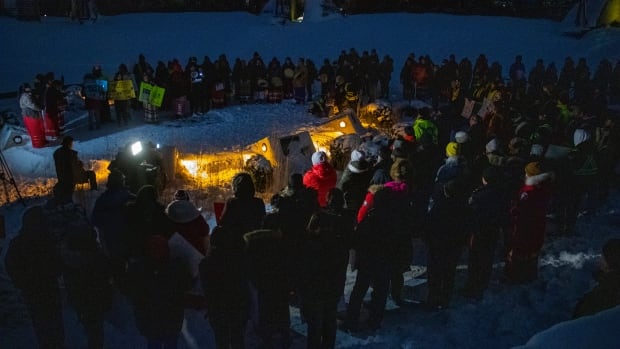 A previously unnamed woman known only as the sole unidentified victim of an alleged serial killer in Winnipeg now has a name given to her by the community: Mashkode Bizhiki’ikwe, or Buffalo Woman.

The name came after discussions among a group of advocates, knowledge keepers and grandmothers who found it didn’t sit well with them that the slain woman, who police are trying to identify, was only being referred to as an unknown victim, said Tobi Jolly, a program co-ordinator at Ka Ni Kanichihk, an Indigenous social services organization.

“The way that we refer to people impacts the way we think about them,” said Jolly, who was part of the group that came up with the name for the woman.

Winnipeg police said on Monday they will also use the name Buffalo Woman for the woman going forward.

Police said last week they believe she was killed by Jeremy Skibicki, who was also charged in May in the killing of 24-year-old Rebecca Contois. Contois was from O-Chi-Chak-Ko-Sipi First Nation, also known as Crane River, located on the western shore of Lake Manitoba

Two of the additional alleged victims were identified as Morgan Harris, 39, and Marcedes Myran, 26. Both were from Long Plain First Nation in south central Manitoba.

All the identified women were living in Winnipeg when they were killed, police say.

Few details have been released about Mashkode Bizhiki’ikwe, who police said they believe was Indigenous and in her mid-20s.

Jolly said the specific name of Buffalo Woman was decided on after someone brought forward a teaching “of grandmother buffalo, the buffalo spirit, giving her name to those of us who don’t have spirit names yet so that we know each other.”

Police have found Contois’s remains, but none of the other women’s bodies. Winnipeg Police Service Chief Danny Smyth said he believes their remains are all at the Brady Landfill, where Contois’s partial remains were found — but too much time has passed and officers will not conduct another search.

Skibicki’s lawyer has said his client plans to plead not guilty to the four counts of first-degree murder he’s charged with in the women’s deaths, which police allege happened between March and May.

The group wanted to give the woman a name as soon as possible for several reasons, including so police could start using it, Jolly said.

In a news release on Monday afternoon, the Winnipeg Police Service said it will do just that.

The change was made as a sign of respect and at the request of community advocates, knowledge keepers, elders and leadership, the release said.

Members of the police service, including the force’s family support and resource advocate, are also meeting with family representatives and leadership. Police will not provide any further comment until those meetings are done, the release said.

Jolly said the group also wanted the name to be ready in time for a vigil for missing and murdered Indigenous people that happened on Sunday — where she was moved to hear people shout it.

That echoes a sentiment shared at the rally by Point Douglas MLA Bernadette Smith, whose sister Claudette Osborne went missing in 2008.

“We don’t want someone to be known as unidentified,” Smith said. “A life is sacred.”

Delores Daniels, whose 19-year-old daughter Serena McKay was fatally beaten on Sagkeeng First Nation in 2017, said Buffalo Woman was also the spirit name her daughter was given after her death.

“The buffalo represents respect, and our people need to be respected, and the men out there need to respect our women,” Daniels said at the rally.

Jolly said while advocates can’t force anyone to use Mashkode Bizhiki’ikwe’s name, she hopes people see why it’s important.