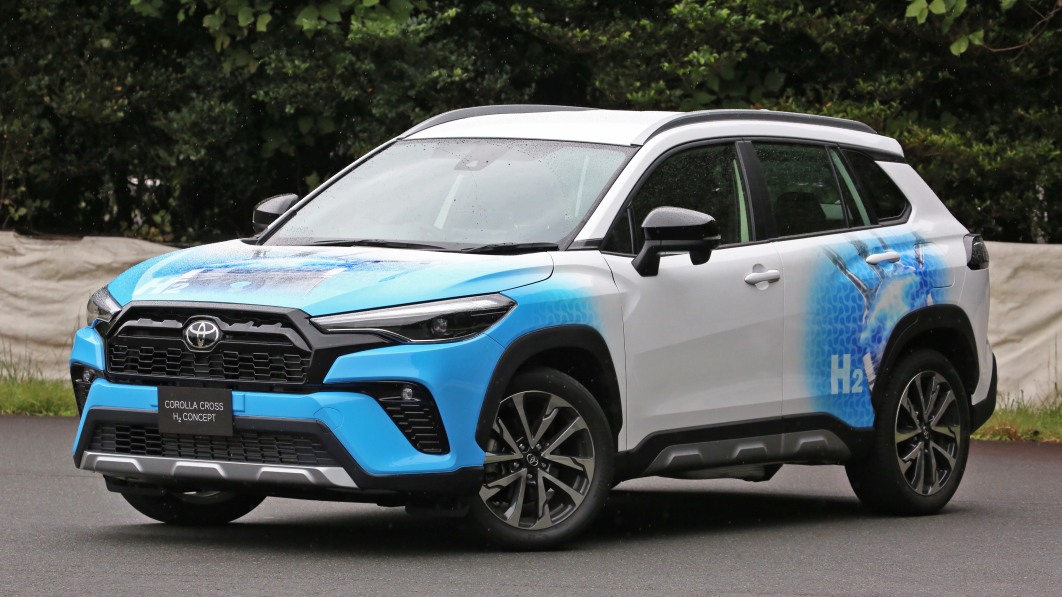 Many have accused Toyota of dragging its feet on EVs, but the company is not treating battery electrics like a foregone conclusion. Like a college freshman who’s just dumped their high school sweetheart, it’s keeping its options open. It’s been campaigning a hydrogen combustion race car (note that it’s not a fuel cell vehicle but a conventional piston engine that burns H2), and the first road car derived from that technology has entered the prototype stage.

The Toyota Corolla Cross H2 Concept is powered by a version of the turbocharged 1.6-liter three-cylinder found in the GR Yaris and GR Corolla. That means it still has pistons, rods and a crankshaft. And instead of using hydrogen in an electrochemical process to power a car electrically, the engine employs a modified fuel delivery system, injectors and ignition setup to burn the element.

It adopts the hydrogen storage technology put forth by the Mirai, but can be built easily using traditional ICE manufacturing methods. Toyota says the system has quicker refueling times than charging a BEV and reduces dependency on precious metals like nickel and lithium, both required for electric vehicles.

In one year of campaigning what is essentially a GR Corolla that runs on hydrogen in Japan’s Super Taikyu endurance series, Toyota has been able to markedly improve efficiency of the hydrogen combustion engine. By the end of the season, Toyota says it upped horsepower by 24% and torque by 33%, putting it on par with gasoline engines. The race car didn’t have the range of an equivalent petrol car, but engineers managed to increase the distance covered on a tank of H2 by 30% over the season. Similarly, refueling time was greatly reduced, from about 5 minutes to just 90 seconds.

The race Corolla had four tanks of hydrogen stuffed in the cargo area, but the Corolla Cross H2 will test real world practicality. It can carry five occupants and their luggage. It will soon begin winter testing in Japan.

Toyota estimates that the Corolla Cross H2 is only 40% of the way to commercialization, and doesn’t yet know if it can bring it to market. The prototype’s reveal took place at the same EU conference where the company announced an EV manual transmission and an expansion to six electric vehicles in the BZ family, so Toyota isn’t under any illusions that EVs will be a big part of the future.

On the other hand, Toyota sells cars in 170 countries with very different infrastructures and driving habits. Toyota believes that with a multi-technology approach — which includes battery electrics, hybrid-electrics, plug-in hybrid electrics, hydrogen fuel cells and hydrogen combustion cars — they have a better chance of achieving zero emissions.

Simultaneously Toyota is working with companies researching green hydrogen production and transport so that it has many avenues to get to carbon neutrality. The race cars are fueled with hydrogen fuel created from renewable energy. If nothing else, the firm is proving that even in a non-gasoline future, motorsports is still an important crucible for developing technology that can filter down to road cars.