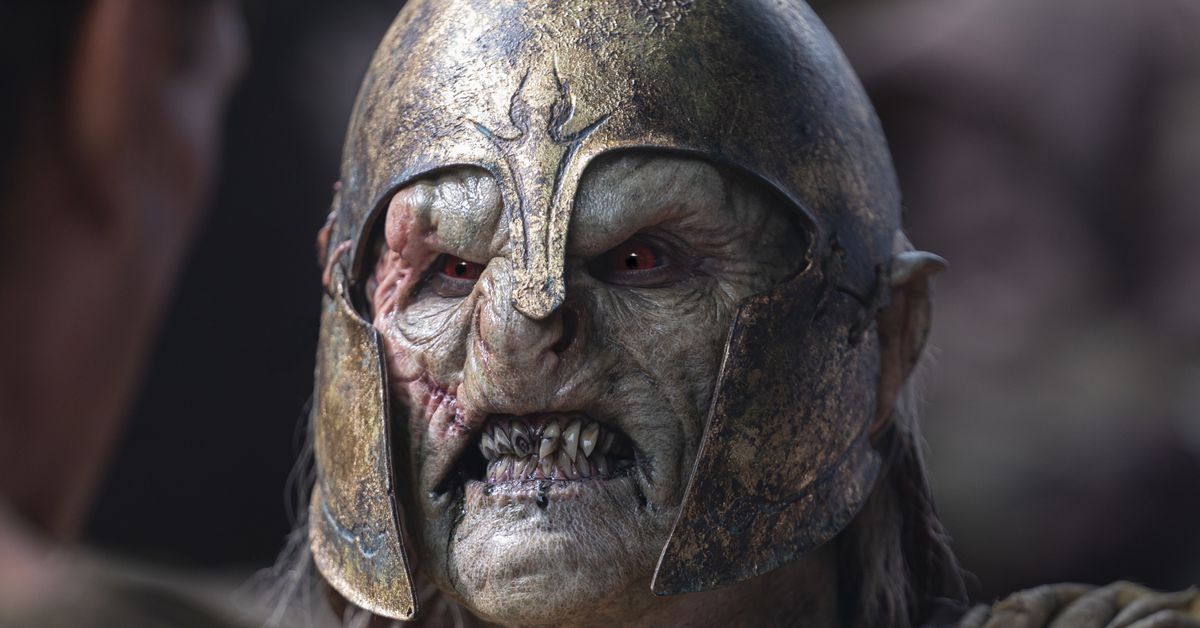 [Ed. note: This post contains light spoilers for the end of episode 2 of Rings of Power.]

In the first two episodes of The Lord of the Rings: The Rings of Power, our glimpses of orcs are fairly limited. But even so, they’re like nothing like what we’ve seen of them on screen before. Though they’re still a threat, they’re no longer a swarm. Instead, the Amazon show is showing just how scary one of them can be.

Lord of the Rings has taken a turn into horror before, but Rings of Power carves out its own niche here. When Bronwyn (Nazanin Boniadi) goes to warn the townspeople that a neighboring town fell to who knows what, it feels more classically pulled from a horror movie, as her neighbors wave away her concerns as flights of fancy. But it also marks the differing relationship with the orcs: These people are a few generations removed from the last time anyone would’ve seen an orc around. And the mere idea of it seems unbelievable to them; they’re more afraid of a returning occupying force than the whispers of a myth.

And so, Rings of Power treats its orcs in these early episodes with distinction. They’re no longer the horde introduced in The Fellowship of the Ring, tumbling off a cliff in their haste to attack their enemy, but a singular, terrifying monster quietly climbing into Bronwyn’s home. The orc’s introduction has all the hallmarks of a slasher villain, received in bits and pieces: an eye through the floorboards, a hand clacking as it hits the ground, a close-up of a mouth and its grotesque tongue. We can make out its skull mask in fuzzy profile, but we only see its full monstrosity once it’s found Bronwyn hiding in the cupboard.

The orc here still holds to the general canon — it’s a malicious creature, looking like a flayed person, and a foe whose fighting skill is still bested by a mother and her son. But the menace of it feels real in a way that a lot of the rest of Rings of Power can’t quite materialize. While a swarm of them could feel threatening in the Lord of the Rings trilogy, a single orc here still feels potentially deadly. To put it one way, it’s the difference between Alien and Aliens, illuminating the vulnerability that comes with each version of the monster.

It’s certainly enough to get Bronwyn and her fellow townspeople to set out at first light to seek help from the elves. And while there’s a lot we still don’t know about how Rings of Power will (or won’t) change Tolkien’s canon, this feels like a step in the right direction. The most interesting thing you can do with a prequel is find ways to deconstruct what makes a thing tick and then more deeply explore aspects of the story that already feel familiar. It lets us see something in a new light in order to let us understand it better. With the menace posed by just one orc — the way it moves and what it is — it illuminates the bone-chilling terror of facing down an army of them, and the stakes of every orc showdown to come.