We have a new expansion for our WW1 Italian Front FPS game Isonzo releasing today! It’s the first part of our Caporetto season of free expansions, and features a whole new faction with the arrival of the German Empire on the Italian Front, and brings a new map for the Offensive game mode. There will be two more releases in the Caporetto season, each one with a new map to ultimately link together into a three map Caporetto Offensive.

The German faction comes with more than ten  new weapons, as well as historically accurate uniforms and equipment. This first Caporetto map sees you taking part in the early stages of the Twelfth Battle of the Isonzo, with German troops assaulting Italian positions on the road to Caporetto. Historically it was a military disaster for Italy which brought down the government – but maybe things can go differently with you on the battlefield?

The update sees new uniforms and equipment from the German Empire for Isonzo’s six classes: Rifleman, Assault, Engineer, Officer, Marksman and Mountaineer. For those who aren’t familiar with the game, each class has different weapon, gear and perk options that allow you to specialize your play style within the overall focus of the class. For instance, Marksmen are always sharpshooters, but a lot depends on your loadout. You could be a long-range sniper and observer identifying and eliminating high value targets with a scoped rifle, or you could equip body armor to take and hold a front line position with deadly accurate mid-range fire. Every class has choices to make in this regard.

In Isonzo’s signature Offensive game mode, one side must attack and break through multiple defensive lines. Thick layers of barbed wire, trenches, and whatever extra defenses the enemy engineers put together will stand in the way of a successful attack. Objectives can be taking and holding key points, or planting dynamite to sabotage enemy supply stashes or heavy artillery guns.

The new Caporetto map – the first of three in the season – is a huge battlefield based on the strategically important Monte Kolovrat. There are five defensive lines, where each line has two objectives for the attackers before they can advance further. While in the historical Battle of Caporetto both German and Austro-Hungarian forces were involved, in Isonzo we’ve chosen to focus on the German contribution, so the map recreates the stunning German advance from the town of Tolmein all the way to Kolovrat Ridge. It’s a damp, overcast day when the attack begins, and the attackers must first cut their way through lines of wire to break into a devastated town – including capturing a church defended by multiple heavy machine gun positions. Fortunately, in Isonzo there are many tactical options available to deal with such strong points: artillery barrages, smokescreens, snipers, rifle grenades, even poison gas. From there, it becomes a literal uphill battle for the German attackers as they begin to climb towards the peak of Kolovrat Ridge. They’ll need to sabotage bunkers and capture command posts while navigating rocky trenches and steep forested slopes. At the penultimate fourth defensive line there is a huge siege mortar to sabotage and a cluster of houses providing cover to the Italian defenders – then it’s one last climb to reach the final objective: Hill 1114. If the Germans can take it, the Italians will finally be the ones fighting uphill as their reinforcements stream in to try and counterattack.

Of course, things are no walk in the park for the defenders either – although it’s easier to maneuver when going downhill, and it’s much simpler for officers to deploy flares to call in support, the extensive trench lines can become a liability once the Germans get a foothold, providing cover as they advance. Some of the Italian defensive positions can be exposed against the sky, making it easy for German marksmen to pick off targets. Italian engineers should make good use of their construction abilities to put down additional sandbags and lay out extra wire to prevent German assault troops sneaking through the trees to flank trenches with their grenades or light machine guns.

As we mentioned before, historically the Battle of Caporetto was a disaster for the Italians. Appalling leadership led to poorly motivated and unprepared troops falling apart in the face of the combined Austro-Hungarian and German armies using cutting edge infiltration tactics. The Italian soldiers were not allowed to retreat until too late, and in the end hundreds of thousands would surrender. After Caporetto the top Italian general was fired and replaced by someone far more competent, who managed to turn the war around for the Italians. In Isonzo, it’s a more fair fight where both sides have an equal chance of winning, if they can use all the tactical options available better than their opponents.

The release will also bring other improvements to the game, including a prestige mode and higher level cap. Additionally, for those who want more options for visual customization of their character, the Royal Units DLC is releasing alongside the free expansion and contains uniforms from the German Kingdoms of Bavaria and Württemberg. Though part of the German Empire, these states had their own distinctive uniforms which we’ve carefully recreated with the same accuracy and attention to detail as with the other uniforms in the game.

The Battle for Caporetto Begins…

Isonzo is available right now on the Microsoft Store for Xbox, and the free Caporetto expansion is out today! Plenty of time to master the art of mountain warfare before the German Empire joins the action on the Italian Front. Follow us to get the latest development news as we add the finishing touches!

We’ll see you in the trenches! 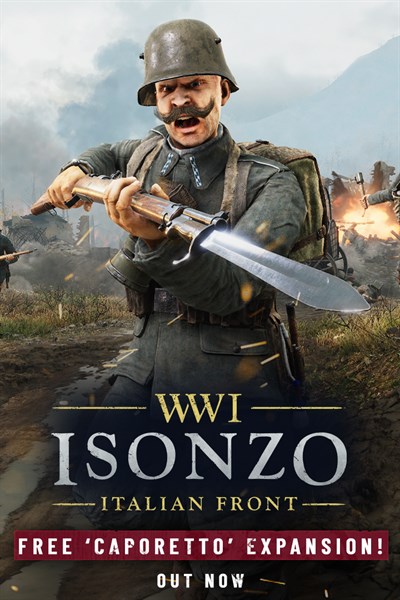 World War One expands to the mountains of the Italian Front – beautiful but deadly in equal measure. Inspired by the two year struggle for control of the Isonzo river valley and the Alps during World War One, Isonzo elevates the WW1 Games Series, figuratively and literally.

From the makers of Verdun and Tannenberg…

Take part in historical offensives from the Sixth Battle of the Isonzo to the Strafexpedition. Reflecting the course of the actual battles, as the attackers advance the fighting will shift through vastly different landscapes within a single offensive: from hillside fortresses to mountain trenches and fierce urban combat on city streets. Everything is recreated based on research and field trips, from sound effects and uniforms down to the houses, vineyards and trenches you’ll be fighting over.
The new Offensive game mode puts you right in the middle of key historical offensives on the Italian Front. Lead the charge across stunning Italian landscapes as you choose your path to victory – cut paths through barbed wire, flank your enemies by following mountain trails, or man a mortar to blast a way through. Shape a dynamic battlefield by laying sandbags and wire, placing ammo crates, deploying trench periscopes or sniper shields, and more.

Call in support with a unique historically accurate flare system: flare guns can mark targets for artillery or biplane flybys, or different colored flares can be used to guide your team. Once the big guns have softened up the enemy, finish the job at close quarters with an Arditi dagger or mountaineer’s pickaxe. Man heavy machine guns, mortars and even mountain guns for more direct fire support.

Choose from six classes based on historical combat roles and build your loadout from a selection of weapons, equipment and perks linked to that class, giving flexibility and variety while staying grounded in what real soldiers might have carried. You’ll be operating wire cutters, bandaging yourself and wounded teammates, and blowing the whistle to start an assault. One shot can kill and even lighter injuries can lead to quickly bleeding out.

Being an effective soldier in Isonzo is not just about being a good marksman. Mastering the terrain is also key – the mountain can be a friend or foe. Learn how to navigate well to maintain cover and surprise your enemies or support your allies.

Finally… watch out for the dreaded poison gas. You’ve never experienced WW1 action quite like this!

Isonzo key features include:
• MOUNTAIN WARFARE: Assaulting mountain fortifications, battling through ruined towns, and fording rivers are just a few of the challenges you’ll face as you fight your way through numerous enemy positions
• TACTICAL MULTIPLAYER FPS: Choose your role and loadout carefully to survive this high altitude combat – play a sniper to pick off the enemy engineers before they can cut your wire, use rifle grenades to clear enemy machine guns, and much more
• WORLD WAR ONE GAMEPLAY: Historical Offensive game mode based on real battles and focused on the unique challenges of Alpine warfare. Fight with 30+ WW1 weapons, poisonous gas attacks, and intense artillery barrages
• BUILD FOR VICTORY: Place your own wire, sandbags, trench periscopes, and more! Whether you’re digging in or on the attack, shaping the battlefield to your advantage will be key to victory
• FACES OF WAR: Make every class your own by picking from a variety of historically class-appropriate uniforms, accessories and headgear. As a finishing touch, you can even pick your mustache from several famous period-accurate styles!
• AUTHENTIC WW1 ATMOSPHERE: Accuracy in everything from maps and weaponry to music and the uniforms – fight for the Kingdom of Italy, the German Empire or the Austro-Hungarian Dual Monarchy

MORE GAMES IN THE AUTHENTIC WW1 GAME SERIES
Immerse yourself in more WW1 action with our other standalone titles Tannenberg and Verdun. Experience trench warfare on the Western Front in Verdun, or maneuver for control of key sectors in Tannenberg on the Eastern Front. These authentic WW1 shooters let players choose from a range of squads from across the war, as they fight for control of the ever-changing frontlines.