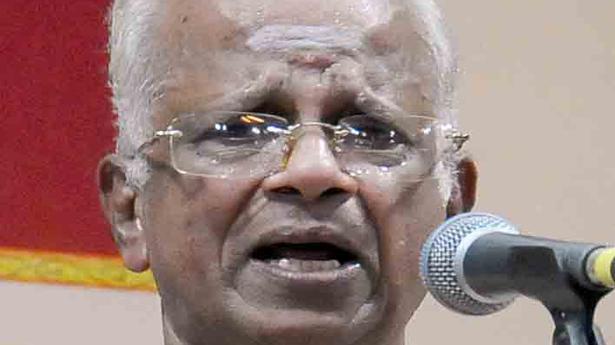 The Carnatic music community on Friday night mourned the loss of one of their greats — T.V. Sankaranarayanan — a vocalist who carried on the glorious tradition of Madurai Mani Iyer. He suddenly collapsed in his home.

What noted vocalist Sanjay Subrahmanyan recorded recently on social media in his series, “On that Note”, captured the greatness of the music by Sankaranarayanan. It was about a concert held in the Music Academy in 1979. “Finally, he sang ‘Eppo Varuvaro’ and the audience just burst into applause. The kind of applause [he received] was reverberating. And then there were requests. Somebody was shouting this song, somebody was shouting that song. Then he sang the English note and finished the concert. We walked out and my mother was saying, ‘he brought in the soul of Madurai Mani Iyer’,” Mr. Sanjay recalled.

His narration captured the effect that Sankaranarayanan had on his audience. Mani Iyer died in 1968. In the following decades, it was his nephew Sankaranarayanan who sustained his school of music, even though Mani Iyer had coached a few disciples.

Presiding over the music festival of the Music Academy in 2003, the year he was conferred the Sangita Kalanidhi award, Sankaranarayanan said he was fortunate to be born in a family of great musicians. His maternal grandfather Ramasamy Iyer and his maternal grand uncle Madurai Pushpavanam were legends during their time.

He would say it was by God’s grace that he had become a musician despite having a degree in commerce and law. “Great musicians would visit my uncle and I would have the opportunity to learn and sing because of this association. They honoured me by accompanying me in my concerts,” he had said. He also recalled the advice of his uncle Mani Iyer: “listening to a senior musician amounts to practising for 10 days.”

N. Murali, president of the Music Academy, said while carrying forward the lineage of Madurai Mani Iyer, Sankaranarayanan had evolved his own style of singing. “He sang in the academy for many decades and his concerts were a huge attraction. He richly deserved the Sangita Kalanidhi award,” he said.

Music aficionado S.L. Narasimhan, who has a huge collection of recordings of great masters, explained that for a male singer, Sankaranarayanan had a relatively high pitch. “He was a crowd-puller in the 1980s and 90s. I remember a concert in R.R. Sabha. Suddenly the power went off. He, however, went on singing the song in Poorvikalyani ragam that he had already begun, and rendered ‘keerthana paramabhavana rama’, followed by the ‘swaram’. The power came back only after that. The incident speaks volumes about the throw of his voice,” he said.

Mr. Narasimhan said Sankaranarayanan introduced the ragam-tanam-pallavi singing in ragas such as Kapi, Behag, Bindumalini, Revathi and Brindavanasarang. He also popularised the compositions of Thulaseevanam, a Kerala-based composer.