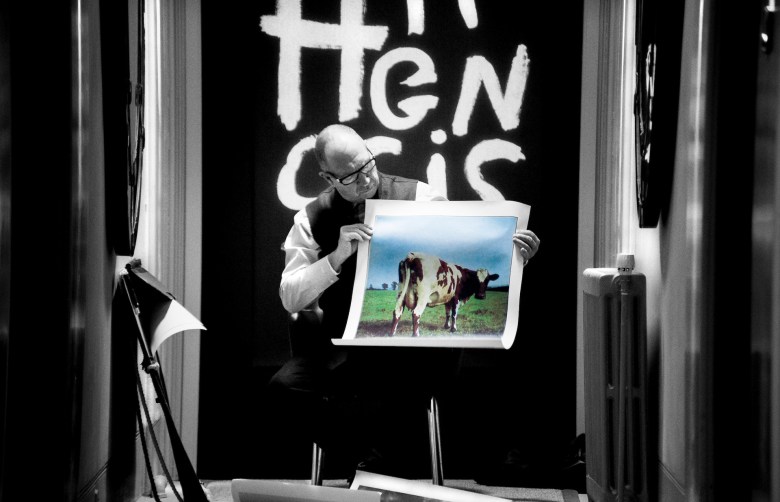 Telluride: Anton Corbijn makes his feature documentary directing debut with the story of Hipgnosis — which isn’t quite as interesting as their album covers.

Lately, there’s been a curious strain of kneejerk revulsion expressed toward musical biopics such as “Elvis” for repeating tropes identified in “Walk Hard: The Dewey Cox Story,” as if all popular genres don’t have repeated tropes. What’s funny is that there’s never really been the same reaction toward music documentaries in the 40 years since “This Is Spinal Tap.” Especially since that’s a much better movie. But why should there be? Just like pop and rock music depend on repetition (and the anticipation of repetition) for satisfaction and emotional release, music films, narrative or documentary, return to the same hallmarks over and over again.

“Squaring the Circle,” Anton Corbijn’s feature documentary debut, falls into this tradition too. This slightly overlong look at Hipgnosis, the London-based graphic design startup that designed some of the most striking, and important, album covers from 1968 to 1980, retreads all the old patterns of music docs: pretentiously-lit talking head interviewees giving non sequitur remarks, snippets of songs you wish you could hear in full, dodgy pacing, oddball tangents, a puzzling framing device — and damn if it isn’t a highly watchable good time.

Corbijn, Dutch music video director across decades, and visual creative director for U2 and Depeche Mode, who’s supervised the creation of their album covers, is the perfect person to be telling this story. It starts with Hipgnosis co-founder and principle photographer Aubrey “Po” Powell walking through woods toward what appears to be a church, instantly ascribing a spiritual dimension to the studio’s work. The documentary gets conventional from there with Powell, Roger Waters, David Gilmour, Jimmy Page, Robert Plant, Paul McCartney, and Noel Gallagher speaking to camera in high-contrast black-and-white that’s somewhere between “Roy Orbison: A Black and White Night” and Jonas Åkerlund shooting Lady Gaga’s “Paparazzi” mugshot.

Shaking up the durable music doc form is a bit of a tall ask, though. And if “Squaring the Circle” is conventional, it’s at least a sturdy story-delivery mechanism for telling how Hipgnosis themselves did revolutionize album covers. There’s the account of how they hired two child models to frolic on the otherworldly stepstones of the Giants Causeway in Northern Ireland for the “Houses of the Holy” cover. How they carefully stenciled in each raindrop on the hood of the car Peter Gabriel’s driving on his self-titled album to make sure each would pop. And in a particularly “Spinal Tap”-worthy bit of excess, spent £3,000 to fly a photo crew to Hawaii, photograph a sheep placed on a lounge chair, then only give that image 35mm of space on 10cc’s “Look Hear?” All that effort poured into an image that exists but can barely glimpse.

Corbijn uses animation to bring some of these stories to life, particularly effective when showing how the cover art for Led Zeppelin’s “Presence,” with a family at dinner looking at a strange “2001”-like monolith, came together using analog compositing. And there’s plenty of archive photographs and video clips, especially of late Hipgnosis co-founder Storm Thorgerson, presented here as the mad genius of the group, a volcanic presence “in tennis shorts and smelly T-shirts” so committed to his high-concept ideas the actual artists whose albums would get these designs didn’t even really matter. When he had an idea rejected by one artist, he’d pitch it to another — and one of Corbijn’s funniest moments is capturing McCartney’s reaction when he learns one of his album covers was from that reject pile.

Those kind of incidents make “Squaring the Circle” so much fun. You think you’re just in for a chronological, album-by-album approach and then suddenly there’s Noel Gallagher lamenting that all his daughter knows about album art is from the little index image on iTunes “because she’s grown up with the phone.”

Of course, the most famous of the Hipgnosis album covers are those for Pink Floyd, with Waters and Gilmour looming especially large in this doc. Thorgerson actually knew them from his teenage years and found a special artistic connection with them for his album art, putting the traditional photograph of the whole band in just a tiny bubble on the “A Saucerful of Secrets” cover, merely a quizzical cow sans any text to identify that it even was a Pink Floyd album on “Atom Heart Mother,” and, yes, the epochal prism art for “Dark Side of the Moon.”

What Corbijn lacks in filmmaking panache here he makes up with strong journalistic chops: These interviews are great. The story about arguably the greatest Floyd album cover, “Wish You Were Here,” with one man shaking the hand of another guy who’s on fire, goes into the difficulty of finding a Hollywood stuntman willing to set himself on fire for an album cover rather than for a movie. “Who wants to be on a record cover when we could be in ‘Towering Inferno?’” And the story of the famous “Animals” cover becomes the story of how The Floyd and Hipgnosis itself hit the end of their relevance — as graphic designer Peter Savile, who in some ways was to the ’80s what Hipgnosis was to the ’70s, “By the time you’re floating giant inflatable pigs over Battersea Power Station, you’re not talking to 15 year olds anymore.”

There’s something hope-giving about all these stories, especially in this time when artists continually have to place limits on themselves. These are dispatches from a time when no detail was unimportant and anything was possible. Even pigs could fly. And if the grandeur and self-importance are worthy of “Spinal Tap”-level mockery, underlying those things is something admirable: ambition. So what then if “Squaring the Circle” isn’t as ambitious as its subject?

“Squaring the Circle” premiered at the 2022 Telluride Film Festival. It is currently seeking distribution.

Game of Thrones: The Most Heartbreaking Deaths in the Franchise, Ranked

Will Smith sheds light on Oscars slap, life after