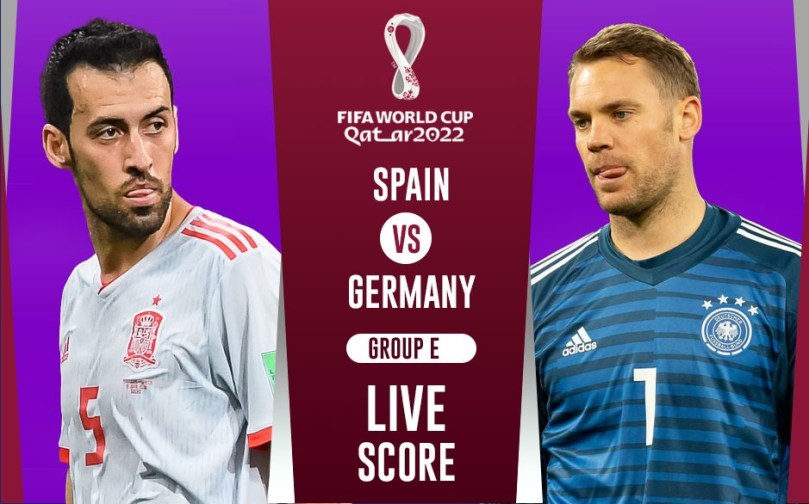 Spain Germany LIVE Score – FIFA World CUP 2022: Qatar World Cup is just a week old and the multiple time World Champion Germany is facing a prospect of possible EXIT from the event. Germany, after a group-stage exit in Russia four years ago will now face SUPER-IMPRESSIVE Spain in MUST WIN clash on Sunday. Hansi Flick’s side once again face the risk of early elimination as they fell to a shock 2-1 loss against Japan. Spain on the other hand defeated Costa RICA 7-0: Watch Spain Germany LIVE Streaming at 12:30AM IST (28th Nov) & FIFA WC LIVE Streaming on JIO Cinema: Follow LIVE Updates with InsideSport.IN

Can Germany show some magic? On Friday, Chelsea striker Kai Havertz said the players were holding onto their beliefs. They know the challenge ahead, especially against a Spain team that steamrollered Costa Rica 7-0 in their opening game.

“Everyone knows our point of view and how we think,” Havertz said in a pre-match press conference.

“Really, our focus is 100 percent on football, nothing else. We just said what we think, what our point of view is, everyone knows that, and now it is about playing football.”

🎙️ Hansi Flick: “For us, it’s just important that we ultimately show character on Sunday.”

The head coach is clear about what he expects from his side at the weekend 👇#GER #FIFAWorldCup pic.twitter.com/ZkSnFF70uG

SPAIN vs GERMANY Head to Head

In the United States (U.S.), the game can be watched live and on-demand with FUBOTV

Viewers in the U.S. can also watch the game on FS1 (English) and Telemundo (Spanish).

BBC One are showing the clash in the United Kingdom (UK), with streaming via BBC iPlayer.

In India, the Sports18 network has the rights to show World Cup games on TV, with streaming services on JioCinema.