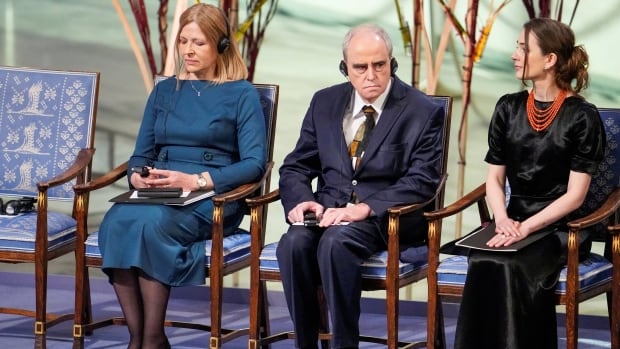 The winners of this year’s Nobel Peace Prize from Ukraine, Belarus and Russia shared their visions of a fairer world and denounced Russian President Vladimir Putin’s war in Ukraine during Saturday’s awards ceremony in Oslo, Norway.

Oleksandra Matviichuk, a human rights lawyer who heads Ukraine’s Centre for Civil Liberties, dismissed calls for a political compromise that would allow Russia to retain some of the illegally annexed Ukrainian territories, saying that “fighting for peace does not mean yielding to pressure of the aggressor, it means protecting people from its cruelty.”

“Peace cannot be reached by a country under attack laying down its arms,” she said, her voice trembling with emotion. “This would not be peace, but occupation.”

Matviichuk repeated her earlier call for Putin — and Alexander Lukashenko, Belarus’s authoritarian president, who provided his country’s territory for Russian troops to invade Ukraine — to face an international tribunal.

“We have to prove that the rule of law does work, and justice does exist, even if they are delayed,” she said.

Matviichuk was named a co-winner of the 2022 peace prize in October with Russian human rights group Memorial and Ales Bialiatski of Belarus, head of the Viasna Human Rights Centre. Later on Saturday, the other Nobel prizes will be formally presented during a ceremony in Stockholm.

Bialiatski, 60, was detained following protests in 2020 against the re-election of Lukashenko. He has remained in jail pending trial and faces up to 12 years in prison if convicted. Bialiatski wasn’t allowed to send his speech. He shared a few thoughts when he met in jail with his wife, Natallia Pinchuk, who spoke on his behalf at the ceremony.

“In my homeland, the entirety of Belarus is in a prison,” Bialiatski said in the remarks delivered by Pinchuk — referring to a sweeping crackdown on the opposition after massive protests against an August 2020 fraud-tainted vote that Lukashenko used to extend his rule. “This award belongs to all my human rights defender friends, all civic activists, tens of thousands of Belarusians who have gone through beatings, torture, arrests, prison.”

Bialiatski is the fourth person in the 121-year history of the Nobel Prize to receive the award while in prison or detention.

In the remarks delivered by his wife, he cast Lukashenko as a tool of Putin, saying the Russian leader is seeking to establish his domination across the ex-Soviet lands.

“I know exactly what kind of Ukraine would suit Russia and Putin — a dependent dictatorship,” he said. “The same as today’s Belarus, where the voice of the oppressed people is ignored and disregarded.”

The triple peace prize award was seen as a strong rebuke to Putin, not only for his action in Ukraine but for the Kremlin’s crackdown on domestic opposition and its support for Lukashenko’s brutal repression of dissenters.

As part of efforts to silence voices critical of Russian President Vladimir Putin, the Kremlin has gone to court to try and shut down Memorial International, Russia’s most prominent human rights group.

Russia’s Supreme Court shut down Memorial, one of the country’s oldest and most prominent human rights organizations that was widely acclaimed for its studies of political repression in the Soviet Union, in December 2021.

Prior to that, the Russian government had declared the organization a “foreign agent” — a label that implies additional government scrutiny and carries strong pejorative connotations that can discredit the targeted organization.

Yan Rachinsky of Memorial described the Russian aggression against its neighbour as a “monstrous burden,” but he strongly rejected the notion of “national guilt.” He said the notion of collective guilt is abhorrent to fundamental human rights principles.”

Russian forces have turned the city of Bakhmut into ruins and have also struck hard in other cities in Eastern Ukraine, President Volodymyr Zelenskyy said in his nightly video address on Friday.

“Bakhmut, Soledar, Maryinka, Kreminna. For a long time, there is no living place left on the land of these areas that have not been damaged by shells and fire,” Zelenskyy said. “The occupiers actually destroyed Bakhmut, another Donbas city that the Russian army turned into burnt ruins.”

The General Staff of the Ukrainian Armed Forces reported missile attacks, about 20 airstrikes and more than 60 rocket attacks across Ukraine between Friday and Saturday.

Spokesperson Oleksandr Shtupun said the most active fighting was in the Bakhmut district of Donetsk region, where more than 20 populated places came under fire. He said Ukrainian forces repelled Russian attacks in Donetsk and neighbouring Luhansk.

Taking Bakhmut would rupture Ukraine’s supply lines and open a route for Russian forces to press on toward Kramatorsk and Sloviansk, key Ukrainian strongholds in Donetsk. Russia has battered Bakhmut with rockets for more than half of the year. A ground assault accelerated after Russian troops forced the Ukrainians to withdraw from Luhansk in July.

Meanwhile, German Chancellor Olaf Scholz said on Saturday that the Russian president is determined to conquer parts of Ukraine and shows no restraint in his brutality. However, Scholz said it’s still important to keep contacts open in case a moment arrives to end the war.

“Whenever I speak with Putin, he says very clearly that for him it is about conquering something,” Scholz said at an event in Potsdam, near Berlin. “He simply wants to conquer part of Ukrainian territory with violence.”

LISTEN | War crimes investigator says atrocities in Ukraine are ‘on another level’:

As It Happens6:48War crimes investigator says atrocities in Ukraine are ‘on another level’

Scholz has spoken directly with Putin more than most other Western leaders since the Feb. 24 invasion of Ukraine and said he plans to continue speaking with him. The two last spoke by telephone for an hour on Dec. 2.

The German chancellor said it was not clear how many Russian soldiers had died so far in the invasion, but the number could be as high as 100,000.

“We have seen the brutality the Russian president is capable of. In Chechnya where he basically eradicated the whole country. Or in Syria. There is no restraint there, it’s as simple as that,” Scholz said.