Rings of Power could cost $1B. What’s making TV so expensive? | CBC News 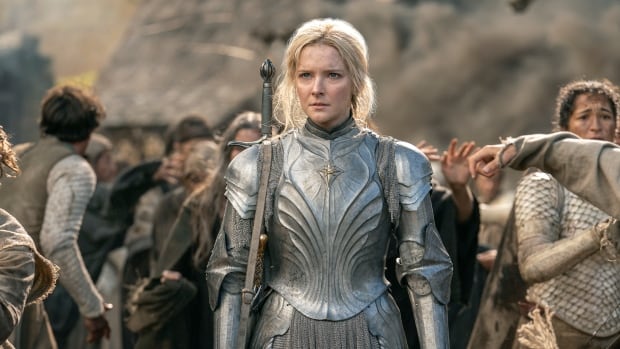 Markella Kavenagh’s experience on the set of Rings of Power was unlike anything she says she’d worked on before. For an adaptation based on the fantasy mythos of J.R.R. Tolkien’s Lord of the Rings, the Australian actor — who plays the hobbit Elanor (Nori) Brandyfoot in the series — expected lots of studio work, CGI and green screens.

Instead, what is reportedly the most expensive TV series ever made did what it intended to do — pulled out all the stops.

“They kind of built the foundation literally in the groundwork for us,” Kavenagh told CBC News of the massive on-location construction done for the Amazon Prime Video show, which premiered Friday.

“They built all of these sets for us. They made them as real as possible, and we were able to just go in and just react to that, really.”

That level of production is hardly surprising; it’s just another massive-budget series among a sea of others, which are slowly but surely changing both the TV and cinema landscape.

Amazon CEO Jeff Bezos, a noted Tolkien fan, had his company acquire the rights to Lord of the Rings‘ appendices for a reported $250 million US. The appendices are additional information Tolkien included at the end of his books, and because of that Amazon does not even have the ability to include information from the books’ main story or its prequels like The Hobbit.

And with a five-season run costing an estimated $465 million per season, Rings of Power could cost the studio in excess of $1 billion.

While that would put it in league with the most expensive series out there, it’s far from alone. According to Variety, Game of Thrones cost HBO roughly $100 million per season over its eight seasons between 2011 and 2019. Netflix’s first two seasons of royal drama The Crown cost around $130 million, which according to the BBC, is comparable to the actual cost of the Royal Family for the British government.

Similarly, Netflix’s Stranger Things fourth season cost a whopping $40 million per episode over its nine episodes. HBO Max’s House of the Dragon, which debuted only a week before Rings of Power, was a comparatively cheap $200 million according to Variety — a similar, though slightly lower, figure to the Alberta-shot series The Last of Us.

There’s also Disney+’s WandaVision, Apple TV’s See and another upcoming Amazon production, Citadel. That project, from Captain America and Avengers directors the Russo Brothers, has a budget that’s reportedly ballooning to over $200 million for just seven episodes — the second-most expensive show ever made, according to The Hollywood Reporter.

While the TV industry has always been a big business, single-season budgets that dwarf Hollywood blockbusters (for comparison, the budgets for both Top Gun: Maverick and The Batman were just shy of $200 million) did not used to be the norm.

And screenwriter and University of Georgia film and TV professor Neil Landau explained it’s not only the money invested in these shows that’s changed, but the way production companies — and most importantly, streamers — view them.

As far back as 2010, outlets like the New York Times, Vulture, the Wall Street Journal and Vanity Fair were noting the rising quality of TV shows like Breaking Bad, The Wire and Mad Men over film.

But where they were primarily cable TV shows that were unique among the mostly close-ended series, that’s no longer the case. Vast, serialized and cinematic shows are becoming the norm for production companies and show writers, who are starting to see television as an entirely new genre.

“They call themselves filmmakers,” Landau said. “They’re shooting a feature film every week. You know, they’re not following the formula or a template. It’s extremely cinematic television for writers.”

That, Landau said, has come from the move from network and cable TV to streamers — who don’t require ad breaks or strict time blocks that often led to necessarily formulaic stories. They also don’t have the same risk of channel surfers leaving after the first minutes of an episode — allowing them to write more cinematic stories, since streaming services know audiences are likely to stay within their ecosystem whether or not they like a particular show.

But as streaming became the dominant way audiences consume media, the field crowded. Since Netflix used to be the only option for most looking to stream content, studios would license their content to be hosted there.

“That’s not true anymore,” Landau said, noting how studios like Disney, Apple and HBO have all opted to make their own platforms instead of looking to Netflix. “[Audiences are] across all the platforms. So now it’s like, who’s going to make the most noise to actually get eyeballs to pay attention when there are over 500 choices?”

WATCH | ‘Epic’ Rings of Power series takes Lord of the Rings fans thousands of years into the past:

Amazon spent a reported $1 billion US making the first season of Lord of the Rings: The Rings of Power, a series CBC’s Eli Glasner calls ‘epic and elemental. An amazing start.’

How to ‘cut through the clutter of the streaming wars’

Matthew Belloni, former editor of The Hollywood Reporter and founding partner of media news outlet Puck, says that’s driving studios and streamers to spend big on tentpole series. The name of the game is having something notable enough to bring audiences into the ecosystem.

And for Amazon particularly, Belloni said, actually making money on Rings of Power or any other series is mostly an afterthought. Bezos (who famously quipped in 2016 that when Amazon wins a Golden Globe, “it helps us sell more shoes”) has a company that is far more than a streaming service. It — and the vast majority of other streaming services, which are mostly offshoots from more diversified companies — doesn’t need to make a profit on its shows.

That’s what has allowed Amazon to spend as much as it has on Rings of Power, and motivated an advertising campaign that Belloni compared to “a traditional movie-style press rollout on steroids.”

As long as Rings of Power captures attention — either through cinematic storytelling, or simple curiosity about its high price tag — it will have done its job. And, according to Belloni, it seems to be working.

“The success of this show will validate the strategy of going big,” Belloni said. “And …  if anything, everybody else is learning from HBO Max’s experience with Game of Thrones and House of the Dragon, that this is the way to go. That these big, big projects that are getting media coverage like this is the way to cut through the clutter of the streaming wars.”

Canadian, indie film at risk of being overwhelmed

But Toronto film and TV producer Marina Cordoni says that success comes at a price for film — especially Canadian film.

During pandemic closures, and even after, theatres have struggled to survive and eke out a profit. That’s made it immeasurably harder for films to earn a profit. And though blockbusters can weather the storm and still manage to pull in an audience, Cordoni said it makes it virtually impossible for indie films to find their audience.

At the same time, people’s tendency to stay home to watch shows has led to the proliferation of long, cinematic-style series mainly from America — largely at the expense of homegrown film.

“All I’m hearing from the networks being the traditional ones and or the streamers, is that they’re moving away from film and concentrating on series,” she said. “Streamers have a monopoly on the audience now because people don’t need to leave their homes.”

If that continues, she said, it could have serious consequences for film.

“Otherwise,” she said, “I believe, we’ll lose it and we’ll lose our place in the world, in a sense, on the world stage.”

WATCH | Amazon’s billion-dollar bet to hold on to subscribers:

E-commerce giant Amazon’s new Lord of the Rings show is a billion dollar bet aimed at holding onto subscribers in an increasingly competitive streaming service environment.