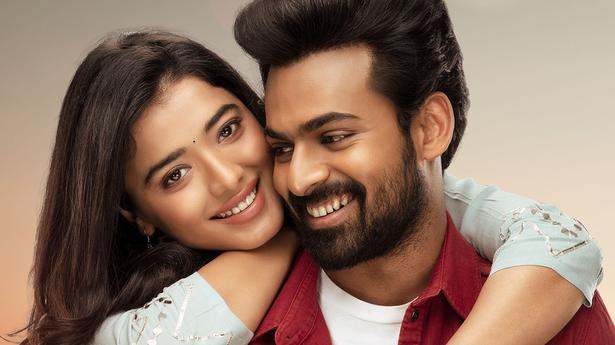 This is the season of nostalgia at theatres. In August, Mahesh Babu’s birthday (August 9) was marked by the re-release of Okkadu and Pokiri in cinema halls. Then, to mark Pawan Kalyan’s birthday on September 2, theatres are witnessing the re-release of the star’s earlier hit Jalsa. One of the new Telugu films that released in theatres this week, Ranga Ranga Vaibhavanga directed by Gireesaaya and starring Vaishnav Tej and Ketika Sharma, has a story that is heavily inspired by Telugu films of the mid-1990s and early 2000s. We don’t know if the story was intended to hark back to comparatively simpler times and talk about family ties and friendships, but with the lack of anything new in the narrative or the treatment, it ends up as an outdated, dull film.

A boy named Rishi and a girl named Radha are born on the same day in the same hospital. Their parents are the thickest of friends and the families live as neighbours. The boy and the girl grow up as friends and fall in love in their teens, until a fight separates them. The egoistic two cold shoulder each other for 10 years, though they secretly care for each other.

As adults, Rishi (Vaishnav Tej) and Radha (Ketika Sharma) continue to squabble in the medical college. The campus scenes feel as new as the arrival of colas after liberalisation. Take the stethoscopes and coats away and the jokes are stale and lame, like the campus films of the 1980s and 90s, with the lecturer (Ali) merely present to add to the comedy.

The film has several scenes inspired by Nuvve Kaavali, Nuvvu Leka Nenu Lenu and Ninne Pelladatha, among several other films, and the spoilsport for the young romance and the parental friendships comes in the form of Radha’s older brother Arjun Prasad (Naveen Chandra), an aspiring politician. While Rishi and Radha’s characters fit into a regular hero-heroine template, Arjun’s character had the scope for some complexities. But what we get is sporadic mentions of striving to keep up honour — on the work front, in the family. Patchily written, the character turns out to be one-dimensional as the story progresses.

A few partly humorous exchanges and Devi Sri Prasad’s music make the first hour watchable. Once the conflict point arrives and the families are torn apart, the story progresses on predictable lines, making the already outdated plotline seem boring. An Araku Valley medical camp segment is thrown in to pack in some more lame jokes involving another lecturer (Raja Ravindra) and Sathya who appears in a cameo.

Vaishnav Tej references popular Rajinikanth dialogues and there is no dearth of hat tips to Pawan Kalyan. His performance and that of Ketika are just about adequate in a film that doesn’t flesh out any of the characters well enough. Naveen Chandra’s is a one-note characterisation and we see him fret and fume most of the time.

V K Naresh, Prabhu, Tulasi and Pragathi as the parents make do with the cliche-ridden parts they get. Towards the end, when Prabhu slaps a character that has been creating most of the trouble between the two families, it comes as a relief. If only he had delivered that slap much before and ended the film earlier!

For a film that has a story about friendships and family bonds, Ranga Ranga Vaibhavanga does not evoke any empathy towards the characters. It is a jaded drama that is stuck in a time warp.

Legends Rajinikanth and AR Rahman Come Together For an Epic Pic Thanks To Aishwaryaa R, See Pic