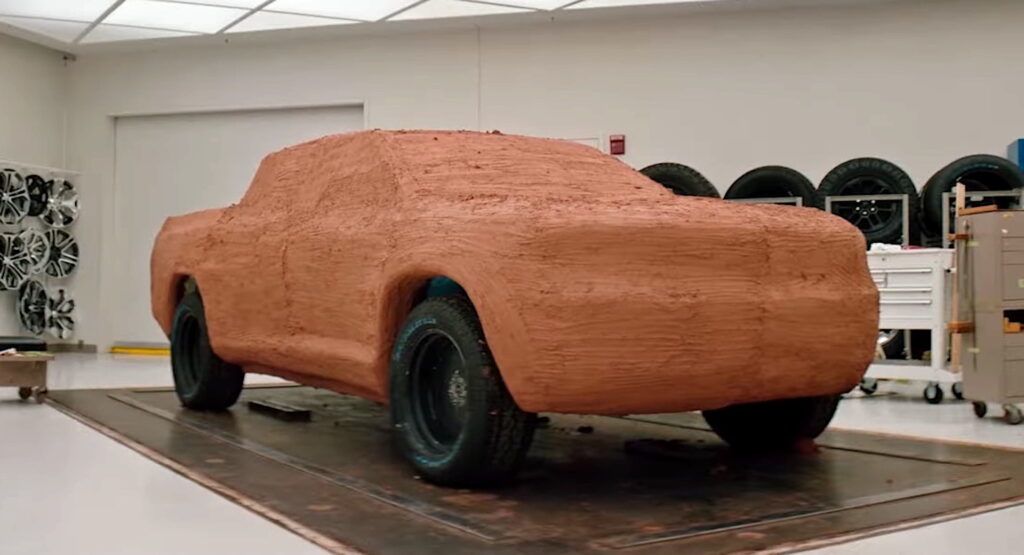 There’s less than a month to go before Ram pulls the wraps off its long-awaited Revolution electric truck concept, and the teasing just intensified with a new video showing the design team at work on a full-size clay model.

Of course Ram isn’t about to give the whole game away just yet, so the one wide shot where the truck can be seen in its entirety shows the pickup in the early stages of development before any of the detail shaping has been performed.

But close-up shots of the finished clay reveal plenty about the Revolution, including its swollen fenders, and pronounced fender eyebrows that wrap around the front corner of the car, almost recalling the front end of a 1959 Chevy Impala, crazy as that comparison probably sounds.

Other spots include the sporty windscreen rake and camera-based door mirrors, while a cutaway video showing the aerodynamic properties of the nose reminds us of the tuning fork DRL design and prominent central Ram badge we’ve seen on previous official renderings of the concept.

Ram’s engineers can be heard asking what Ram should be in the future, and what they can do to help bring that future forward to today. One says Ram needs to be “fierce, slick and heroic,” while another member of the team reckons they’ll have done their job right if the Revolution gives us goosebumps.

Ram’s rival to the Ford F-150 Lightning was due to be unveiled in November, but will now make its global debut at CES in January. This is just a concept, remember. Stellantis is miles behind the competition and the production truck based on the group’s STLA Frame electric platform won’t be here for another 18 months. But when it does arrive that won’t mean the end of ICE-powered Ram trucks. The company will still offer combustion pickups, but will swap its pushrod V8s for the new Stellantis Hurricane inline six.