OPINION | Pride is more than a parade and rainbow crosswalks. We need action and allyship | CBC News 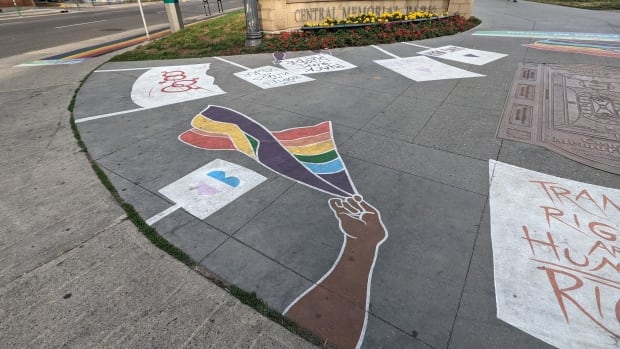 This column is an opinion from Anna Murphy (she/her), an advocate for 2SLGBTQ+ and women’s issues in Calgary. For more information about CBC’s Opinion section, please see the FAQ.

Imagine that every day you had to defend your very existence — not only that, but survive in a world where individuals want to roll back your rights and even eradicate your existence by way of violence.

Imagine the world you fight to live in remains filled with cultural and systemic barriers, misinformation, ignorance and violence.

This is the reality for transgender, two-spirit, non-binary, and gender-diverse individuals across Canada, often pushed to the margins of marginalization, especially those who are Indigenous or persons of colour. Some people debate the existence of transgender, non-binary, and gender-diverse folks, and have denied the presence of two-spirit identities since time immemorial.

Yet these individuals resist oppression and protest against this narrative, simply by walking out into their communities affirming and being exactly who they know themselves to be.

And here is what they’re faced with.

In a July letter to Canmore Pride, Valbella Gourmet Foods president Jeff von Rotz wrote: “…you could not pay me enough to sponsor anything to do with child-grooming tranny’s (sic), please keep these sick people away from the children of this community.”

During a recent debate in Edmonton, MLA and UCP leadership candidate Brian Jean said: “Sexuality should not be taught in schools, biology only, I don’t believe people who went through puberty as males should compete against women.” He repeated this rhetoric in a message to party members this week.

It’s heartbreaking that this is only the tip of the iceberg when it comes to what many 2SLGBTQIA+ individuals face on a daily basis. Statistics Canada reported a 39 per cent increase last year in hate crimes targeting individuals based on their sexual orientation in Alberta, and that’s only the crimes reported to police.

This is a time for everyone to step up and speak out, especially political and cultural leaders, and all those in positions of power and influence. We must ensure that hate and intolerance have no place in our communities.

Now more than ever, the transgender community especially needs allies, for with allies we do not fight our battles alone. We must recognize allyship as a verb, not a noun. It requires using our identity, power, and privilege to influence meaningful change — doing the work of being present, continuously learning, growing, and showing up for those who need us.

The goal of allies must remain achieving tangible, meaningful results.

Calgary Pride is now marking its 33rd year. Pride is a time for amplification, celebration, and education.

Pride is a moment to reflect upon and recognize the courage and sacrifice made by the Black and Latinx transgender women who launched the movement. Pride is a protest and a moment when we acknowledge the struggles, sacrifices, courage, achievements, and milestones of those who have and continue to fight for equity within our communities.

Pride goes beyond a parade. Our allyship needs to reach higher than the raising of a flag, last longer and be bolder than the rainbow paint of crosswalks.

Pride is a movement — movements require action. Actions must be amplified more than words or platitudes.

It is this spirit which led to the decision by Calgary Pride to request that some who applied to march in the parade take time to reflect on their actions, rather than starting their journey of allyship along the parade route. This included the United Conservatives, who despite being welcomed to other Pride events were turned away from the parade this year as a direct result of their actions — such as weakening rules around schools’ gay straight alliances (GSAs) — and in many circumstances inaction.

Across the political spectrum and at all levels, we’ve seen leaders put in that work as champions of human rights and earn their spot to march alongside our communities.

The change we need

Much work remains, such as expanding access to quality affirming health care for all gender diverse Canadians.

The fight for 2SLGBTQIA+ equity is a movement greater than any one individual. Together we must commit to tangible and meaningful change, and collectively move forward to eradicate stigmatization and dehumanization, fetishization and demonization — forging a path which fosters spaces and builds communities where all can see their future as an achievable and affirmed reality.

We know what happens when we allow hate and intolerance to take root. We must not waver or acquiesce on actions which embolden and empower a narrative which affirms the existence and lives of 2SLGBTQIA+ individuals.

Our rights are not now — nor will they ever be — open for debate or challenge.

Do you have a strong opinion that could add insight, illuminate an issue in the news, or change how people think about an issue? We want to hear from you. Here’s how to pitch to us.