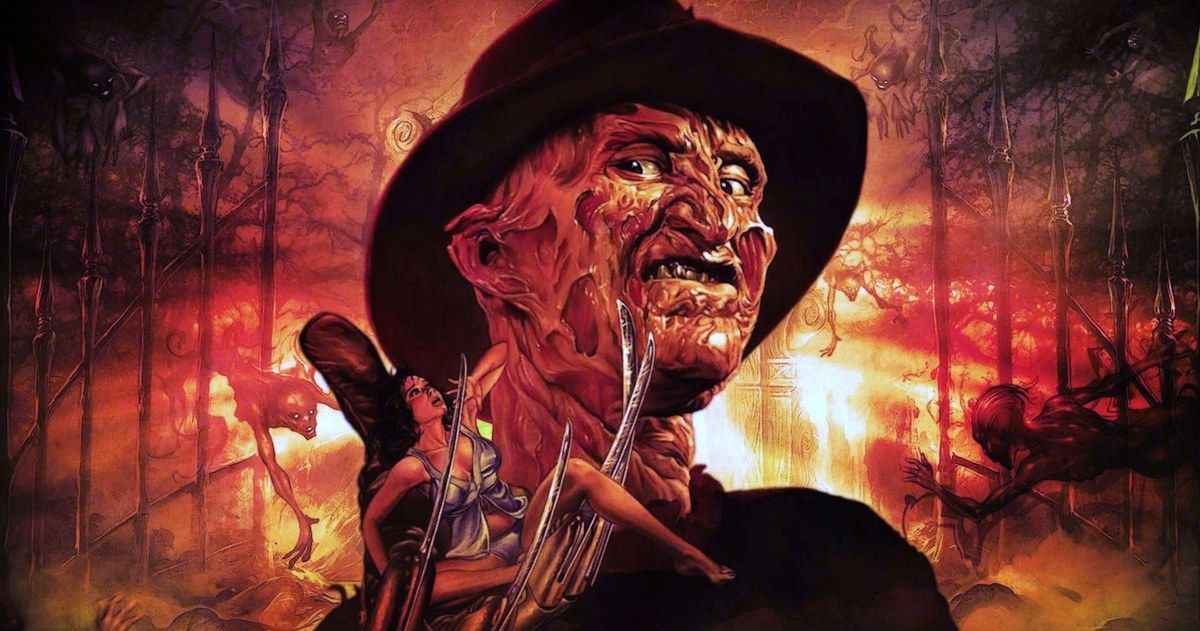 Who doesn’t remember the bed vomiting up massive amounts of blood after swallowing a drowsy teenager?

Or a human marionette whose strings were actually veins that a monster suddenly cut with razor sharp knives for fingers, and the innocent boy falling to his demise?

Or this same monster using a demonic Nintendo power glove to kill someone trapped inside a video game?

Wes Craven’s creation of Freddy Krueger and the Nightmare on Elm Street movies still feel important today. The burned entity with a lethal glove is one of the most iconic slasher killers of horror history, and this is one of the franchises that’s integrity has always been respected story-wise. Unlike Halloween, there are no experiments with the roots of evil and psychosis here — Freddy’s malevolence is significant enough to always feed the subconscious, and it’s how he holds an unsettling agency in our minds. Yes, there was humor, but the reason behind Freddy’s laugh and grin is crystal clear — he’s the representation of pure, untainted evil.

Even if Freddy was almost always played by the one and only Robert Englund, the franchise spanned for more than 25 years, and perhaps you remember different things about it. From Freddy’s very creative kills to a beautiful cinematic relationship with another horror icon that materialized one day, there are many reasons why the Nightmare on Elm Street universe should be part of horror conversations everywhere. But in the end, the grasp of Freddy’s glove isn’t as powerful as those rewatches that made Freddy’s presence impossible to erase. He still holds us in his hands, decades after we saw him the first time.

Nightmare on Elm Street‘s franchise run is pretty simple. With a chronological order that’s similar to the release date, you can’t miss the right path to step into the nightmare and most likely never leave. We’ve put together a guide for you to follow and get as much Freddy as you could dream up, even if some of those titles are nightmares you’ll likely want to forget.

The Nightmare On Elm Street Movies in Chronological Order

Other Nightmare on Elm Street Projects

We’ve also arranged them by release date below if you want to dive into Freddy’s universe that way.

The beginning of the franchise, A Nightmare on Elm Street is Wes Craven’s hint at the corruption of suburbia through a series of mysterious deaths related to teenagers falling asleep and never waking up. A teenage girl goes into survival mode and faces her parents’ hidden vendetta and the nightmare monster that was born out of it. The obvious pick for the best film of the series that would reawaken the figure of an awesome and capable final girl. Oh, and it’s also Johnny Depp’s cinematic debut before he was famous.

Related: A Nightmare on Elm Street: The Most Memorable Nightmare of Each Movie in the Franchise, Ranked

One year after we saw Freddy for the first time on the big screen, he would take revenge on an innocent boy whose only sin was being an underdog with repressed feelings. A Nightmare on Elm Street 2: Freddy’s Revenge wasn’t a huge comeback, but its cult status has been growing ever since. This is the “Freddy crashes a pool party” one, and the one with an infamously creepy intro and ending.

Craven comes back as a screenwriter and Nancy (the hero in the first movie) shows up to guide teenagers in A Nightmare on Elm Street 3: Dream Warriors. They live in a psychiatric hospital when Freddy starts showing up in their nightmares. Dream Warriors is a worthy entry in the franchise that’s also many people’s favorite. Could it be its awesome soundtrack? The short but noteworthy third act? Perhaps

it’s because it contains Freddy’s most famous line, “Welcome to prime time, bitch.” In any case, it works quite well as a standalone film. Really, give it a try.

A Nightmare on Elm Street 4: The Dream Master is the one with a storyline that’s hard to justify, as Freddy comes back to haunt teenagers without much reason. Regardless, it also has one of the greatest sequences of the franchise trapping its leads in a time loop while Freddy keeps chasing them. Were you looking for the “cockroach motel” one? This is it.

Special effects are huge on this one, but A Nightmare on Elm Street 5: The Dream Child is when the franchise starts dying out. Freddy’s comedic tone is invasive, and including a child in the plot was never effective. In this one, Freddy haunts a baby while it still hasn’t been born, and it contains pretty effective asylum sequences and weird camera angles. We also get an iconic Freddy kill: force-feeding a girl her own organs.

3D sequences, Lynchian visuals, and gamer Freddy? Bring it on. Freddy’s Dead: The Final Nightmare was where Freddy was supposed to die, and it wasn’t a spoiler. It was in the title. This one is a collection of 90s style sequences, famous cameos, and Freddy as a flying witch. Unfortunately, it was also the end of an era when the gloved monster was killed in what many consider to be a dull manner. But would this be the last display of Freddy’s shenanigans?

A couple of years after Freddy dies, Craven returns to the franchise and comes up with a great idea to bring Krueger back to life: Freddy exists in the real world and haunts actress Heather Langenkamp (who plays Nancy in the franchise) and everyone involved with the Krueger-verse. As meta as it can be (anticipating Craven’s next film, the meta masterpiece Scream), Wes Craven’s New Nightmare is a fascinating way to explore the effects of fiction and how much power we can give to it.

The clash of the titans, Jason Voorhees and Freddy Krueger, in a town infested by teenagers with issues. Freddy vs. Jason is exactly what the film implies: a series of awesome fights between two giants who are trapped in a plot that isn’t noteworthy. It feels like too many rewrites and ideas mashed together in a horror fan’s dream come true. It would be the last time Robert Englund played Freddy, until the cameo in The Goldbergs for a special episode.

Related: How A Nightmare On Elm Street Reboot Could WorkBack to TopHowever, the Krueger-verse is bigger than these canonical films, and it’s expanded towards other movies and formats. If you want more of Freddy, give these a watch, even if they don’t have much in common with the franchise’s spirit.

Freddy’s show isn’t Freddy’s show. The TV series Freddy’s Nightmares, produced by New Line, only delivered Freddy as a host, and occasionally placed him in plot lines of standalone episodes that told stories set in Springwood (Freddy’s hometown). If you want a good example of cult classic horror TV, this is one of them.

Part of Hollywood’s questionable remake run, the return of the franchise with A Nightmare on Elm Street is hated by most; with a different actor playing Freddy and a similar storyline, it just feels superfluous. It’s never scary, and Freddy’s makeup is so restricted, there’s not much drama to pull from Jackie Earle Haley’s performance despite his skills as an actor elsewhere. Curiously, it stars two very good actors from the present: Rooney Mara as Nancy and Kyle Gallner as Quentin.

A four-hour chronicle on the franchise, Never Sleep Again is a must for diehard fans trying to get their fix on how each film was made. It’s a worthy mention because of how informative and complete it feels. For a franchise as iconic as this one, the last spot deserves to be taken by this honorable study on the world of Nightmare on Elm Street movies.

The Nightmare On Elm Street Movies (and others) By Release Date

The Nightmare on Elm Street movies are available to stream on HBO Max, Screambox, and/or VOD, depending on which one you’re looking for.

Kartik Aaryan opens up about his crazy fan experience; reveals the things he is obsessed with in real life – Times of India

Why I’ve Settled On The Electrum Bitcoin Wallet