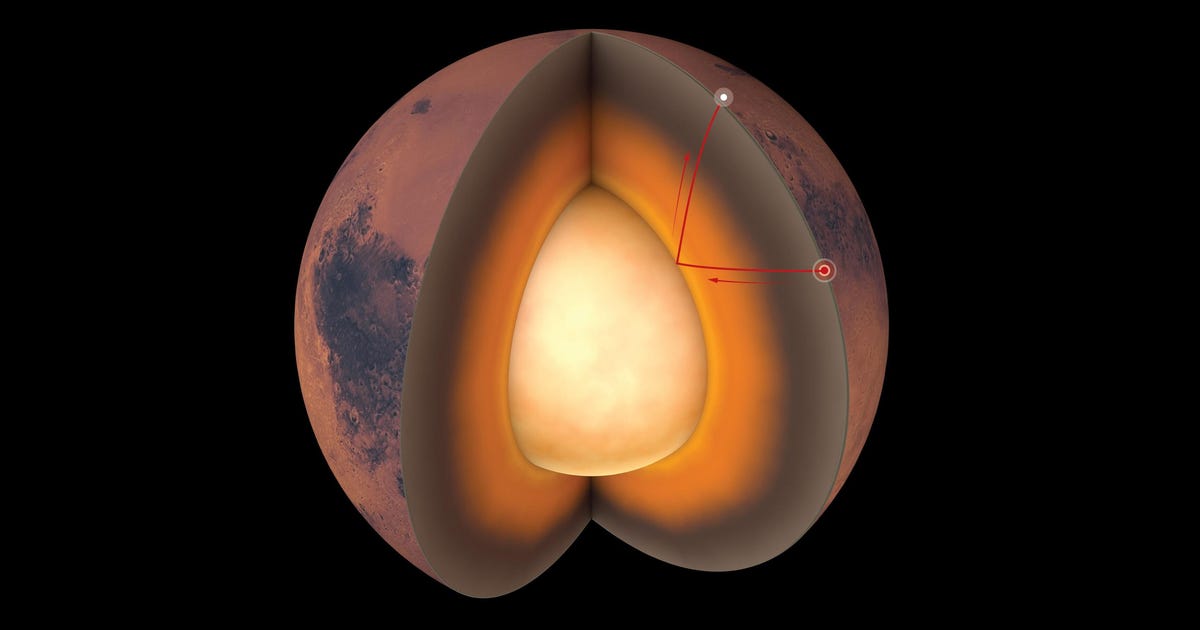 Our general impression of Mars is that it’s largely dry, dusty, dead and inactive, especially when it comes to its geology.

But new data from NASA’s Mars InSight Lander seems to suggest rather than being still and static below its surface, there may be hot magma bubbling, perhaps just waiting to erupt.

Insight landed in a broad plain on the planet called Elysium Planitia, where it has detected low but consistent seismic activity.  A new study published Monday in the journal Nature Astronomy finds evidence that the area sits atop a plume of hot material rising up toward the surface from the planet’s mantle. The region is also home to a system of fissures called Cerberus Fossae, where the most recent volcanic events on Mars are thought to have taken place 53,000 years ago.

Analysis and data from InSight suggest that magma currently below this region explains the Marsquakes detected by the lander and may be driving the slow opening of the Martian crust at Cerberus Fossae, possibly leading to an eruption someday.

NASA’s InSight mission is about to drill Mars


“Ongoing plume activity demonstrates that Mars is not only seismically and volcanically active today, but possesses a geodynamically active interior as well,” Adrien Broquet and Jeffrey Andrews-Hanna, both from the University of Arizona, write in the new paper.

The co-authors suggest that the finding could also have implications for the potential habitability of environments just below the Martian surface, given that it may be warmer and more dynamic than previously thought.

InSight’s recordings of Marsquakes since its arrival in 2018 have led to a new and growing body of scientific literature on Martian geology below the surface. An earlier paper in Nature Astronomy also considered the possibility of magma flowing below Cerberus Fossae.

In 2019, another study suggested a hidden, subsurface magma chamber may have thawed a liquid water lake lurking beneath one of Mars’ ice caps.

Meanwhile, it appears that InSight is now in its last days of operation, leaving the task of investigating volcanism on Mars further to future robots or perhaps even astronauts.