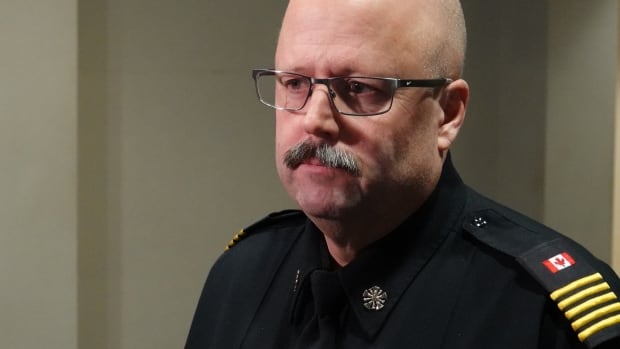 Moncton will use large heated tents with cots to provide emergency shelter for homeless people in the city until an indoor space is ready in January.

Conrad Landry, the city’s fire chief and director of community safety services, told reporters Monday the city has ordered two tents that can accommodate about 60 beds each.

“The city will will need to rely on tents, for sure, unless there’s another building that we haven’t thought or someone wants to come forward and offer the building that’s still close to the resources,” Landry said.

He said the tents would likely be set up in the parking lot of the Lions Community Centre on St. George Street.

On Monday, city councillors approved a plan to use the city-owned building as an emergency shelter space.

The vote came two weeks after advocates said there are more than 500 people living outside or couch surfing, a figure that excluded those already in homeless shelters.

Advocates warned that if the city didn’t open some of its buildings as shelter space, people could die.

Within hours, 35-year-old Luke Landry was found dead in a public washroom outside city hall. Front-line workers had been unable to find him a shelter bed.

Landry said the city needs to rely on tents because the community centre may not be ready to open until early January.

The city expects to announce which community group will run that shelter on Tuesday. Landry said the operator would need a lot of staff to run the new shelter.

“We’re going to pick one community [organization] to lead the whole project, but then they’re going to work with all the other individual organizations,” Landry said.

“We want as many people, as many organizations, to help us out because this is an emergency, it’s a large issue.”

It’s not clear how soon the tents will be ready, but the plan approved by council calls for them to be in place no later than Dec. 19.

The plan to use the community centre was first revealed last week and received tentative council approval. Few details were known, including when it would open, who would run the shelter, or exactly how many beds it offer.

The building has a large auditorium, a kitchen, bathrooms and meeting rooms. It hosts programs like fitness and art classes, and is the home of the Moncton Children’s Dyslexic Learning Centre.

The city has said it will work with the Lions Centre board to relocate programming to other community venues.

Landry said the tents will have security, but won’t be staffed at the same level as the indoor shelter will be once it opens.

He said the tents will have fire alarms and exit doors. The city plans to set up a fence around the property.