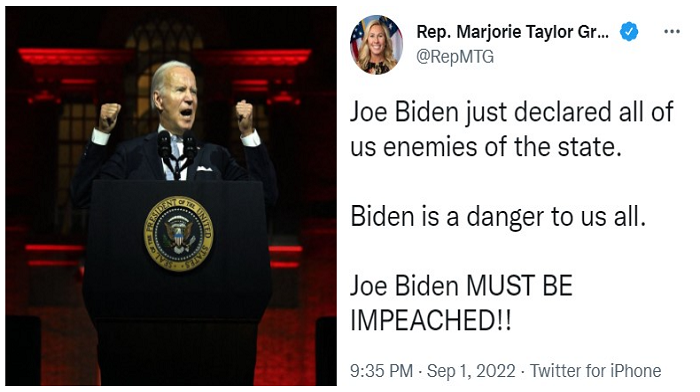 Representative Marjorie Taylor Greene called on President Biden to be impeached following his speech Thursday night in which he vilified “MAGA Republicans” as extremists and a “threat to this country.”

“Joe Biden just declared all of us enemies of the state. Biden is a danger to us all,” she tweeted from her official account. “Joe Biden must be impeached!”

Greene was incensed over the President’s remarks, posting various tweets in which she mocked Biden as “President Butterbeans” and compared the speech – including the blood red lighting behind him – to that of Hitler.

“They chose this imagery. It’s unreal,” she seethed. “Joe Biden is Hitler.”

Joe Biden just declared all of us enemies of the state.

Biden is a danger to us all.

Joe Biden MUST BE IMPEACHED!! pic.twitter.com/mjeoa4e7Vl

RELATED: Trump Has Perfect Response To Biden’s ‘Enemies of the State’ Speech Attacking MAGA Republicans: ‘He Must Be Insane’

In another social media post, the firebrand congresswoman shared a video in which Biden’s speech is altered to look like Hitler speaking in front of Nazi imagery.

“What we all saw tonight from Biden,” Greene wrote.

“I guess when President Butterbeans is frail, weak, and dementia ridden, the Hitler imagery was their attempt to make him look ‘tough’ while he declares war on half of America as enemies of the state.”

What we all saw tonight from Biden.

I guess when President Butterbeans is frail, weak, and dementia ridden, the Hitler imagery was their attempt to make him look “tough” while he declares war on half of America as enemies of the state.

Just to be clear, it’s not real. I know that’s a ridiculous statement to have to make, but we also know full well the fact-checkers are going to write a column clarifying that Biden does not have a mustache and did not deliver a speech in German.

Nothing about this is accidental.

The blood red lights, Marines used as props, just hours after he threatened Americans with F-15s.

Biden, during his speech, did however declare that “Donald Trump and the MAGA Republicans represent an extremism that threatens the very foundations of our republic.”

“There is no question that the Republican Party today is dominated, driven, and intimidated by Donald Trump and the MAGA Republicans, and that is a threat to this country,” he added.

Biden Just Declared War on Half of America

President Biden’s speech was such an authoritarian production that criticism was everywhere.

“I just can’t imagine anything more divisive and more dangerous coming from a president who if he said anything during his campaign, it’s that he would unite the country,” Vance told Fox News. “This is not uniting at all. He’s declaring war effectively on half of the country.”

“I just can’t imagine anything more divisive and more dangerous coming from a president, who if he said anything during his campaign it’s that he’d unite the country…He’s declaring war effectively on half the country.” pic.twitter.com/er2DeaWd3m

That’s saying something, considering Vance once viewed Donald Trump as either “a cynical asshole” or “America’s Hitler.”

Turns out – It was Biden all along.

Speaking of Trump, the main target of Biden’s divisive speech, he asked people to explain to the President what ‘MAGA’ stands for “slowly but passionately,” and suggested there were indications he was “suffering from late-stage dementia.”

Then there was this American hero who captured the thoughts of most sane people watching Biden’s speech.

This isn’t the first time Marjorie Taylor Greene has called on President Biden to be impeached. In fact, she’s one of only a few people with the stones to call for it every time he commits a heinous act, of which there have been many.

Just over a year ago, Greene introduced three impeachment resolutions against Biden, one focusing on his deadly withdrawal from Afghanistan, another involving the crisis at the border, and one more pointing to his extension of an eviction moratorium during the pandemic.

Joe Biden is a total failure and unfit to be Commander-in-Chief.

Now imagine a speech like that was delivered by Trump instead of ‘Dark Brandon.’

How many Democrats today would be accusing Trump of being a fascist and calling for his impeachment? And the thing about the Democrats – they’d actually follow through on it.

What are Republicans going to do? Anything?

What Biden did last night was effectively call for a civil war in this country. He spoke from the standpoint of a true fascist. He did everything Trump has been accused of doing by the media.

And it’s nothing new. He’s been calling Republicans “ultra-MAGA” for some time. He essentially called people who wanted kids unmasked and to be able to attend school in person Neanderthals. He launched his Justice Department against parents by equating them to ‘domestic terrorists.’

Biden should be impeached. It should have happened a long time ago. But it better happen if Republicans take back the House.

China is investing billions in Pakistan. Its workers there are under attack

The airports where delays and long lines are worst

How the US became turkey nation

Was COP27 a Success or a Failure?