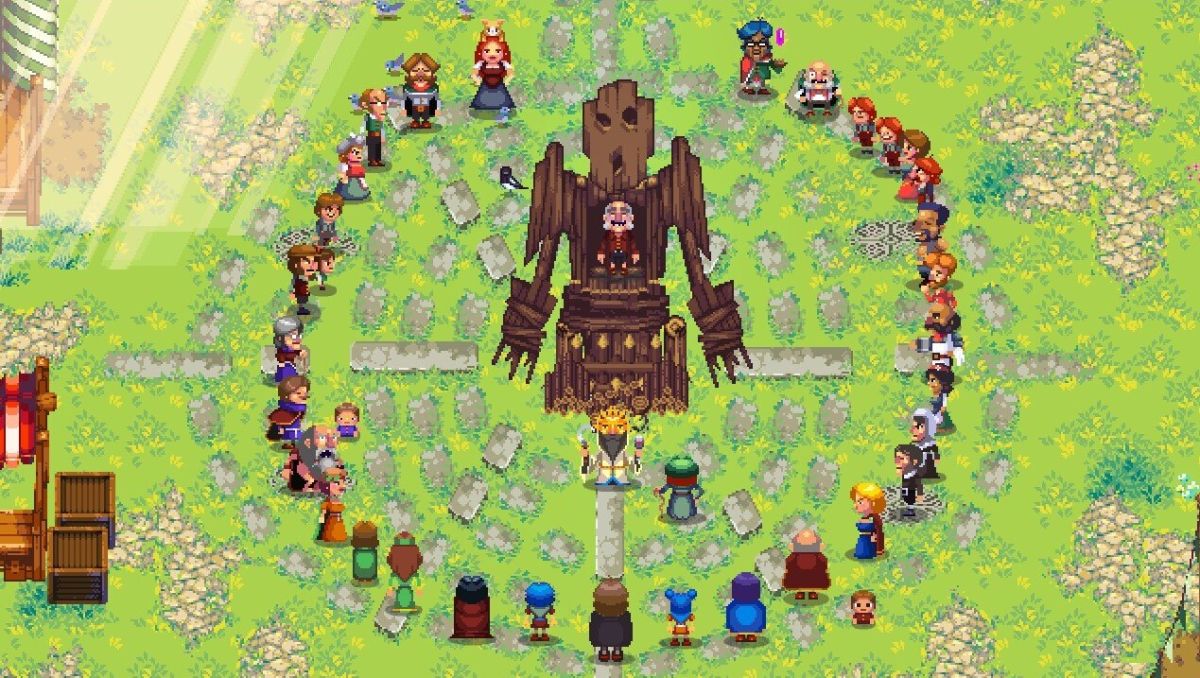 The problem with a game like Kynseed is that it’s nearly impossible to actually finish. That doesn’t mean there’s no end-state, just that there’s such a long lead-time between when you start and when you could conceivably finish doing any and everything the game has to offer. It is a jam-packed game that combines life simulator elements from Story of Seasons and Stardew Valley with western RPGs like Fable and The Elder Scrolls, and it pulls both off pretty well.

Kynseed’s whole premise relies on some of the most basic English folk and fairy-tales for its narrative hooks. In the land of Quill, you and your sibling are one of many pairs of twins who live with the Old Woman Who Lives In A Shoe—until, one day, your heretofore unmentioned Uncle Bill comes and whisks you away to his farm in Quill’s southern vale. In the meantime, you and your twin begin having spooky dreams involving a rabbit-like fairy named Mr. Fairweather.

The prologue pushes players to explore the vale, completing tasks for villagers in Candlewych Village, poking through the ancient wreckage of Cuckoo Wood and Mosswhisper Ruin, and learning about all the little rituals vale-dwellers complete to satisfy their three goddesses: Druida, Morwenna and Hyalis. Keen-eyed players will quickly come to learn that not all is as peaceful or idyllic as everyone would have you believe, and, of course, this all ties in with the mystery of the eponymous Kynseed.

Apart from chasing down the central narrative, players can choose to play the game any number of ways. There are six distinct skill trees, which cover gardening, cooking, fishing, exploration, and melee and ranged combat, respectively. One could conceivably solely focus on their farm, cultivating the land and livestock until every inch of Willowdown Farm is self-sufficient and profitable; they could travel all through Quill in search of secrets and treasures; they could buy a shop in town, focus on starting a family, and—thanks to a dash of Crusader Kings’ influence—create a long and powerful family tree that spans multiple generations. There is no wrong way to play, and this might cause a bit of distress in players used to more structured fare. I have spent the first few in-game days of my own playthrough intent on finding every mapstone in the game, for example. Being able to freely explore and interact with random townsfolk is where I’ve gotten the bulk of my enjoyment from Kynseed so far.

Combat is probably the most surprising aspect of Kynseed. Because the game wants you to focus on peaceful, neighborly interactions between your avatar and the common folk of Quill, fighting only occurs—at least initially—in three wooded dungeons: Simplewood, Midwood and Toughwood. Before entering each forest, you choose your loadout, your campfire meal (which regenerates health), and your weaponry, which you can forge yourself. Once inside, you are in control of everything, from how difficult each fight room is to the kinds of battlefield effects currently in play.

The fights themselves reveal how open and malleable the combat system really is. A lot of work has gone into creating a system that is easy to learn, but hard to master. As you fight, you can move between three locations: top, middle, bottom. You can attack the monster in front of and directly diagonal to you by pressing either A, X or Y on a controller. Pressing B allows you to choose an item; the right trigger lets you aim a ranged weapon at an enemy, which is important for disrupting possibly brutal attacks. As you defeat one of the four possible enemies on the board at any given time, the ones who remain can move into a better position to attack you or even spawn in new enemies. Where you move and how many times you attack depends on your stamina.

Combat ends up feeling extremely involved, but the truth is: most of the systems in Kynseed are this deep. Take blacksmithing, for instance. You can spend five brass coins to rent a smithing station to craft any number of items out of whatever metal ores you have lying around or in your inventory. Simple enough; most games would skip the part where you actually forge your weapon or tool at this point. Even a game known for having complex minigames for peaceful tasks, like Final Fantasy XIV, whisks you past that part. Not Kynseed. Here you will need to melt your ore, pour it into a mold, hammer specific points along the blade, quench the item, and finally sharpen it—all before you’re even ready to take it out of the smithy. The same is true for cooking and creating medicine. Even romantic relationships take on this kind of minigame sheen, with players having to follow specific instructions to make their date happy.

It can end up being a lot to manage, so here are two pieces of advice: don’t skip the tutorials, and don’t hesitate to use the help guides and tips the game gives you. I did on my first playthrough and ended up fully missing how to show objective markers—little fairies called “thatterways” that live in your hair and point you in the right direction—and that you can fast travel by activating any goddess statue you find and paying an apple tax.

What I enjoy the most about Kynseed isn’t the complexity of its systems, or the originality of its story. It isn’t (just) the beautiful 2D pixelated art or the way you enter an area and the music shifts from cheerful to elegiac on a dime. It isn’t any single interaction with a villager, or relationship built up, or neat secret found. It’s the fact that the profound and the mundane mix so well together, how you can be bundling up radishes for a guy you met one minute and piecing together a supernatural mystery the next. There are minor stumbling blocks here and there for me—I wish the game had been clearer about certain time-saving tools up-front—but if you loved watching the seasons change in Animal Crossing or reveled in following a powerful family in its ascendancy in Crusader Kings, you will love Kynseed.