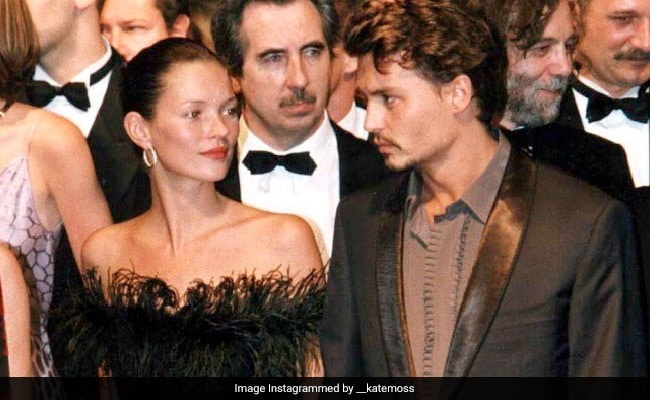 Kate Moss was in a relationship with Johnny Depp between 1994 and 1998. (File Photo)

Kate Moss has revealed that Johnny Depp gave her the first diamond necklace she ever owned but it was hidden in a bizarre location. Talking about her relationship with the ‘Pirates of The Caribbean’ actor, Ms Moss told Vogue that Mr Depp “pulled the necklace out of the crack of his arse”. The 48-year-old model also talked about some of her most iconic looks in the last 30 years. These included a white gown that she wore at the CFDA Fashion Awards in 1995.

“This is the John Galliano dress that I have lost. If anyone has it out there please return to me. It’s my favorite dress,” Ms Moss said in the video released by Vogue.

Turning her attention to jewellery, she said, “And that diamond necklace Johnny gave me, they were the first diamonds I ever owned.”

“He pulled them out of the crack of his arse. We were going out to dinner and he said, ‘I’ve got something in my bum, can you have a look,’ and I was like, ‘What?’ and I put my hand down his trousers and I pulled out a diamond necklace – that diamond necklace,” she added.

The model was in a relationship with the Hollywood actor between 1994 and 1998.

Earlier this year, she was called to a court in the US to testify during the defamation case hearing involving Ms Depp and his ex wife Amber Heard.

She dismissed report that the actor threw her down a flight of stairs, saying it never happened.

Ms Moss was responding to an incident mentioned by Ms Heard before the court in which Mr Depp was alleged to have pushed his former girlfriend Moss down a flight of stairs.

The verdict of the defamation case went in favour of Mr Depp, with the court asking Ms Heard to pay $10 million to him.

Will the new world order be less American?

Trump taxes: US lawmakers get access to former president’s returns

Will the new world order be less American?