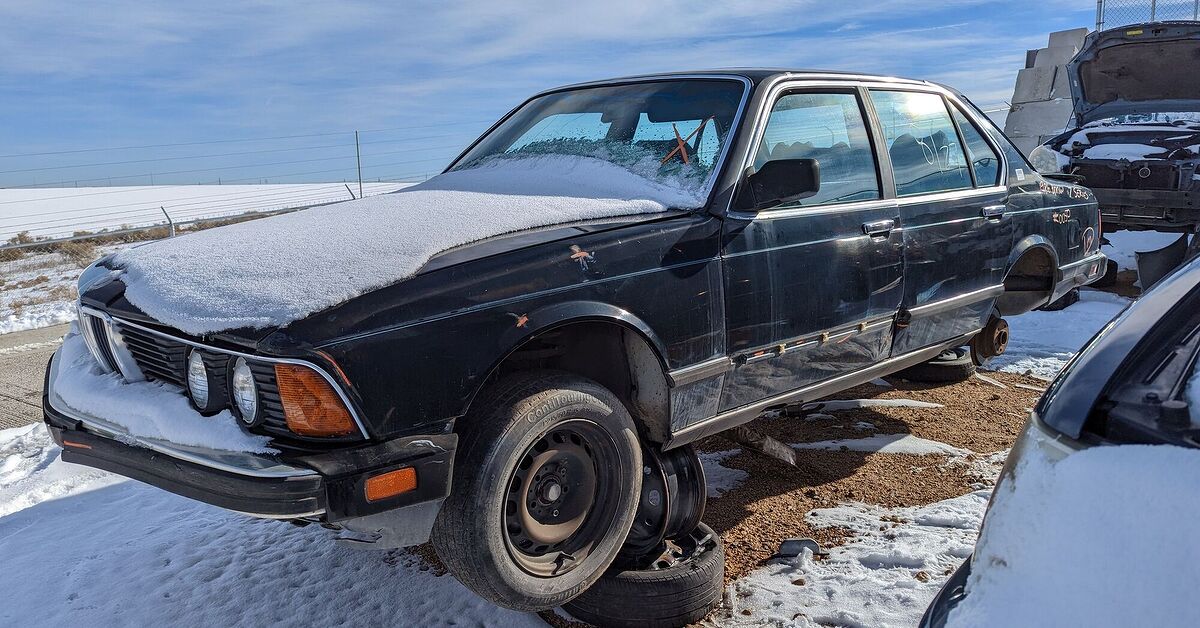 The very first BMW 7 Series cars were sold in North America for the 1978 model year, and production of the E23 continued through the middle of 1986. With a build date of March of that year, today’s Junkyard Find (in a Colorado yard between Denver and Cheyenne) is one of the last E23s ever made.

This car was a big, fast status symbol when new, selling for $38,280 (about $104,085 in inflation-adjusted 2022 dollars). Perhaps enough Bolivian marching powder was snorted in this one to cover the hood as the snow does today (actually, the E24 6 Series was even more cocainey).

The hood was frozen shut, literally, so I couldn’t shoot photos of the 3.4-liter, 182-horsepower straight-six in the engine compartment. A five-speed manual transmission was standard equipment, but very few American 735i buyers wanted to work a clutch pedal; instead, they paid $795 extra (about $2,160 today) for the four-speed automatic. Those raised chrome shift-indicator symbols look cool.

In Europe, BMW shoppers could get this car with a turbocharged engine and 745i badges. They missed out on the luxed-up L7 version, however.

The back-seat passengers got their own air vents and cigarette lighter. The 745i had a separate sound system in back.

I’ve found just a single junkyard 7 Series with a manual transmission. Note the cassette dispensers in the console.

The gauge cluster was gone when I got here, so there’s no way to know the final mileage on this car. The interior looked like it might have been nice enough upon arrival in this car’s final parking space.

What are the chances that these switches still worked at the end?

I still find some examples of the E23’s successor, the E32, in car graveyards, but the E23 has become very rare.

This yard was once the location of the old-school Martin Supply, an amazing place with hundreds of 1930s and 1940s vehicles. Now it’s much neater and easier to navigate, but this BMW was one of the oldest cars I found on my visit.

This car’s body looks to be in pretty good shape, but few enthusiasts seem interested in keeping E32s alive.

[Images by the author]

Become a TTAC insider. Get the latest news, features, TTAC takes, and everything else that gets to the truth about cars first by  subscribing to our newsletter.