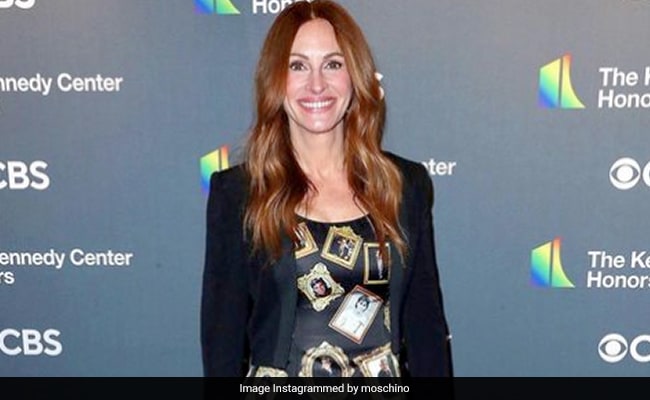 Julia Roberts, Geroge Clooney have appeared in several movies together, including ‘Ocean’s 11’.

Hollywood actor Julia Roberts on Sunday night found a very unique way to honour her good friend Geroge Clooney at the 45th annual Kennedy Center Honors. The ‘Pretty Woman’ star wore a playful dress covered in photos of Mr Clooney as she attended the Washington DC event where her ‘Ticket to Paradise’ co-star was recognised for his artistic achievements and humanitarian work.

Ms Roberts wore a custom black gown by Moschino covered in a print of tiny, framed portraits of Mr Clooney taken over the course of his long career. “Julia Roberts is covered in the love for longtime pal George Clooney! At the Kennedy Center Honors where Clooney was feted Sunday night, the actress wore a custom black Moschino scoop neckline taffeta gown that featured a vibrant collage of various framed pictures of her frequent co-star,” Moschino wrote while sharing a picture of Ms Roberts in the stunning gown.

Take a look below:

Ms Roberts’ stylist Elizabeth Stewart also shared a photo on Instagram of her client in the look from the back showing off the full range of Mr Clooney imagery printed across the gown’s skirt. In the caption of the post, the stylist thanked creative director Jeremy Scott for helping him bring the unique concept to life.

According to Today, Ms Roberts’ dress featured a hilarious print of gold-framed photos of Mr Clooney, including a still from the movie ‘ER’, a candid photo of him and Ms Roberts together, a picture of him accepting an award and some professional headshots from the early days of his career.

Julia Roberts and Geroge Clooney have been friends for decades now. They have appeared together in ‘Ocean’s 11’ and recently co-starred in the romantic comedy ‘Ticket to Paradise’.