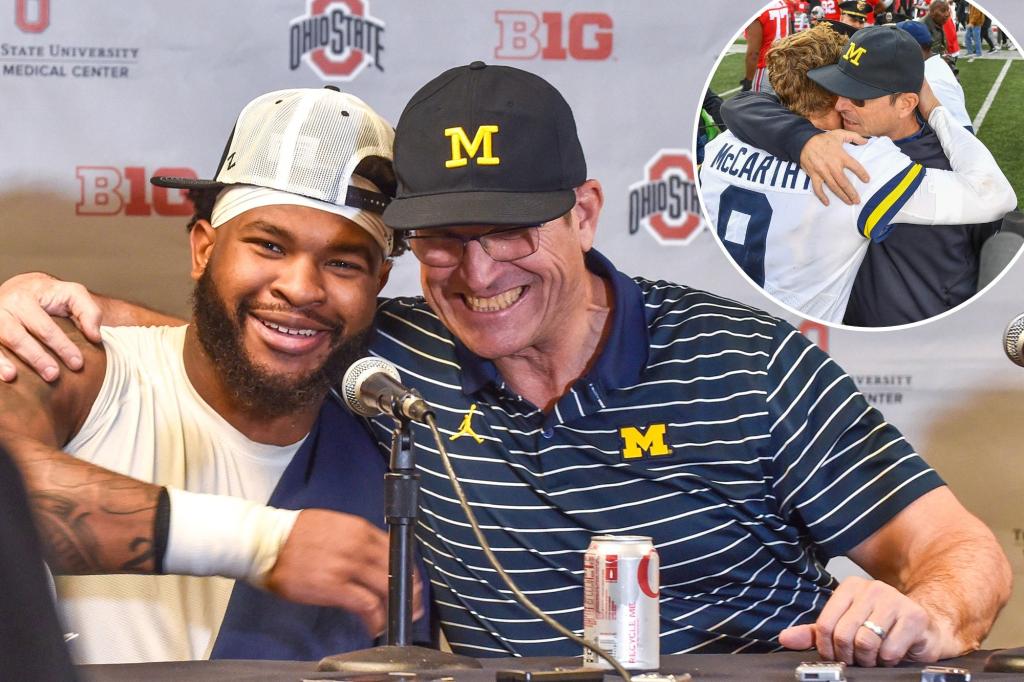 For all of his accomplishments as a player and as a coach, all his successes on the field and on the sideline, Jim Harbaugh has never reached the mountain top.

He’s coached in a Super Bowl and in last year’s College Football Playoff. He played in an AFC championship game and quarterbacked Michigan to a No. 2 ranking and Fiesta Bowl victory in 1985.

This could be the year he finally wins it all.

His Wolverines will at least be one of four teams playing to decide the national championship after their 45-23 throttling of Ohio State in Columbus on Saturday. The smart money is on Michigan getting a rematch with last year’s national champion, undefeated Georgia, in the title game at So-Fi Stadium in California on Jan. 9.

So much has changed for Harbaugh and Michigan in the last calendar year. There is no more Ohio State hex. No more questions if he could get it done at the school he once starred at. No more doubts whatsoever.

He’s led his alma mater to 12-win seasons in back-to-back years for the first time in program history. He lost his star defensive ends, Aidan Hutchinson and David Njabo, to the NFL and rebuilt a roster that feels more dangerous. Saturday, despite a knee injury limiting Heisman Trophy candidate running back Blake Corum to two carries, Michigan still piled up 530 yards of offense on Ohio State and held the explosive Buckeyes to three second-half points. The Wolverines picked off likely Heisman Trophy finalist CJ Stroud twice, just the second multiple-interception game of his career.

It is the only team in the nation ranked in the top nine in scoring defense and points scored and the only school in the top five in both rushing defense and rushing offense. Michigan has now won 22 of its last 24 games. It has claimed back-to-back Big Ten East crowns. It will reach the playoff for the second straight season after its second blowout of hated Ohio State in as many seasons. It has won five of six against its big three rivals, Michigan State, Ohio State, and Penn State, defeating the three by a combined 115-47 this season.

It’s stunning to see this turnaround, after the Wolverines struggled so mightily in the COVID-19-shortened season, losing four of six games and going a mediocre-for-them 9-4 in the previous year. There were calls for Harbaugh to step away; legitimate questions at the time if he was the right man to return Michigan to national contention. He took a massive pay cut prior to last year and saw his $8 million salary sliced in half.

He was given a five-year, $36.7 million extension in February, and he followed that up by proving he was worth every dime. In his eighth season in Ann Arbor, Harbaugh has Michigan among the elite, looking every bit like a team that can get him to the top of the sport for the first time in his memorable playing and coaching football career.

For the time being, the College Football Playoff has a projected top four (in this order) of Georgia, Michigan, TCU, and USC. Georgia gets in with a loss to LSU in the SEC championship, and Michigan can afford to fall to Purdue in the Big Ten final next Saturday as well, unlikely as those scenarios may be. But then, if either TCU or USC lose in their respective title games — and both programs have made a habit out of playing close games — it can get interesting.

One-loss Ohio State, two-loss Alabama, and two-loss Tennessee are the contenders. Tennessee has by far the best win of the three, at home over Alabama, but the season-ending knee injury to quarterback Hendon Hooker certainly hurts them. Alabama doesn’t own a quality win, although its two losses, by a combined four points on the road to Tennessee and LSU, are strong.

Then there are the Buckeyes, who lost only once in ugly fashion on Saturday to Michigan. Ohio State does have wins over Penn State and Notre Dame; teams ranked 11th and 15th by the committee. That could give the Big Ten school the slight edge over Alabama. Then again, a TCU loss to Kansas State shouldn’t necessarily eliminate them. In other words, there are still plenty of scenarios on the table as we go into the final week of the regular season.

My co-worker, Ryan Glasspiegel, nailed it on Twitter Saturday afternoon. Matt Rhule didn’t prove why college coaches shouldn’t go to the NFL; he proved why they absolutely should. There is really no risk involved. You either thrive at the next level and join a select club that includes Pete Carroll and Jimmy Johnson, or get paid big money and still return to college, landing a top job as Rhule did in taking over at Nebraska.

Rhule’s failure with the Panthers, where he was fired after compiling a dreadful 11-27 record in parts of three seasons, sure didn’t scare off the Cornhuskers. They were still sold on Rhule from his fine work at Temple and Baylor, where he revitalized dormant programs. And he still received a long-term deal, an announced eight-year contract. More successful coaches should follow this route.