In US, First Climate Refugees Find Safe Haven In Louisiana 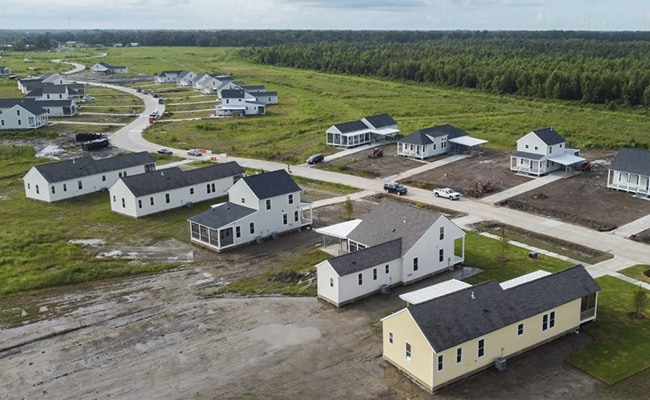 Since the 1930s, Isle de Jean Charles has lost “about 90 percent” of its surface area.

Joann Bourg stands in front of her new home, about an hour’s drive from the low-lying Louisiana island where she grew up — an area gradually sinking into the Gulf of Mexico.

“I’m very excited. I can’t wait to just move on in,” Bourg told AFP. “I’ve been waiting for this day forever.”

Bourg is one of about a dozen Native Americans from the Isle de Jean Charles who have been relocated to Schriever, less than 40 miles (60 kilometers) to the northwest — the maiden beneficiaries of a federal resettlement grant awarded in 2016.

They are the first so-called “climate refugees” in the United States, forced from their homes due to the consequences of climate change.

“The house we had back there on the island — well, that has been home forever. Me and my siblings all grew up there, went to school down there,” Bourg recalls. “It was peaceful.”

But the family home — as with many others on the island — was destroyed.

There is only one road connecting Isle de Jean Charles to the mainland, and it is sometimes impassable due to high winds or tides.

Residents are mainly of Native American descent — several tribes sought shelter on the island from rampant government persecution in the 1800s.

But climate change has transformed the island into a symbol of the scourge that plagues much of hurricane-prone Louisiana — coastal erosion.

Eventually, 37 new homes will be built in Schriever to accommodate about 100 current or former residents of Isle de Jean Charles, thanks to a $48 million federal grant initially allocated in 2016.

“This is the first project of its kind in our nation’s history,” state Governor John Bel Edwards, who was on site to see the residents close on their new properties, told AFP.

“We’ve had people over the years that we would buy their homes out and move them. But we’ve not done whole communities like this and moved them to one place before because of climate change.”

Since the 1930s, Isle de Jean Charles has lost “about 90 percent” of its surface area to the encroaching bayou waters, explains Alex Kolker, an associate professor at the Louisiana Universities Marine Consortium.

The island was already fragile, but climate change heightens the risks, he says — sea levels are rising, the ground is sinking and erosion is rampant. More frequent and fiercer storms intensify the problem.

The road to Isle de Jean Charles is lined with dozens of homes, many of which are stripped down to the pilings.

A year ago, Hurricane Ida slammed into Louisiana as a dangerous category 4 storm; it was the second most damaging hurricane on record in the state, after the devastation of Katrina in 2005.

The storm ripped part of Chris Brunet’s roof off his home.

The 57-year-old placed a sign in front of his home: “Climate change sucks.”

Seemingly indifferent to the voracious and omnipresent mosquitos, and occasionally speaking the old Acadian French associated with the area, Brunet says hurricanes are nothing compared to so-called “saltwater intrusion” destroying canals and other waterways.

A few years ago, he finally agreed to relocation, adopting the view of the leader of his Choctaw tribe that it was the only way to preserve the island’s dwindling community.

But those whose homes remain upright do not want to completely abandon their ancestral land.

Bert Naquin, who is moving into one of the new federally funded houses in Schriever, hopes to repaint her family dwelling in Isle de Jean Charles, despite her joy at being a first-time full homeowner.

“I plan on being down there a lot, because it’s still my home,” the 64-year-old Naquin said.

“This house up here is my house. But the island is always going to be my home in my heart.”