First Look: The 2023 Hornet Is The Most Important Dodge In Over A Decade 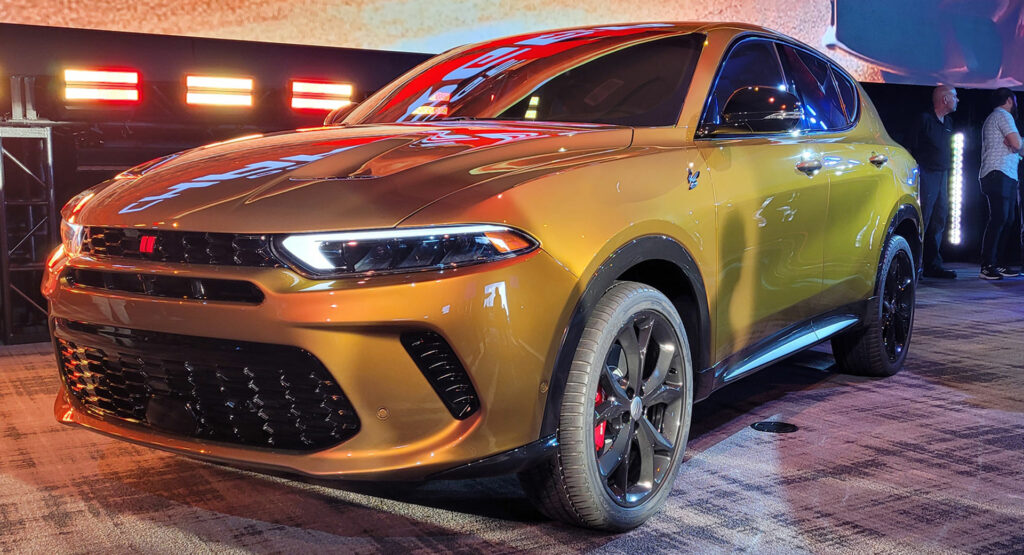 Compact crossovers don’t exactly get the heart racing as many are focused on value and fuel efficiency. While there’s nothing wrong with that, Dodge wants to add some spice to a rather vanilla segment and they’re doing that with the all-new Hornet.

Billed as the industry’s quickest and most powerful crossover under $30,000, the Hornet fills a sizable gap in the company’s lineup while also promising to be performance-focused and fun to drive.

While we can’t talk about the latter quite yet, we did go hands-on with the model during Dodge Speed Week and it’s clear the Journey is a distant memory. 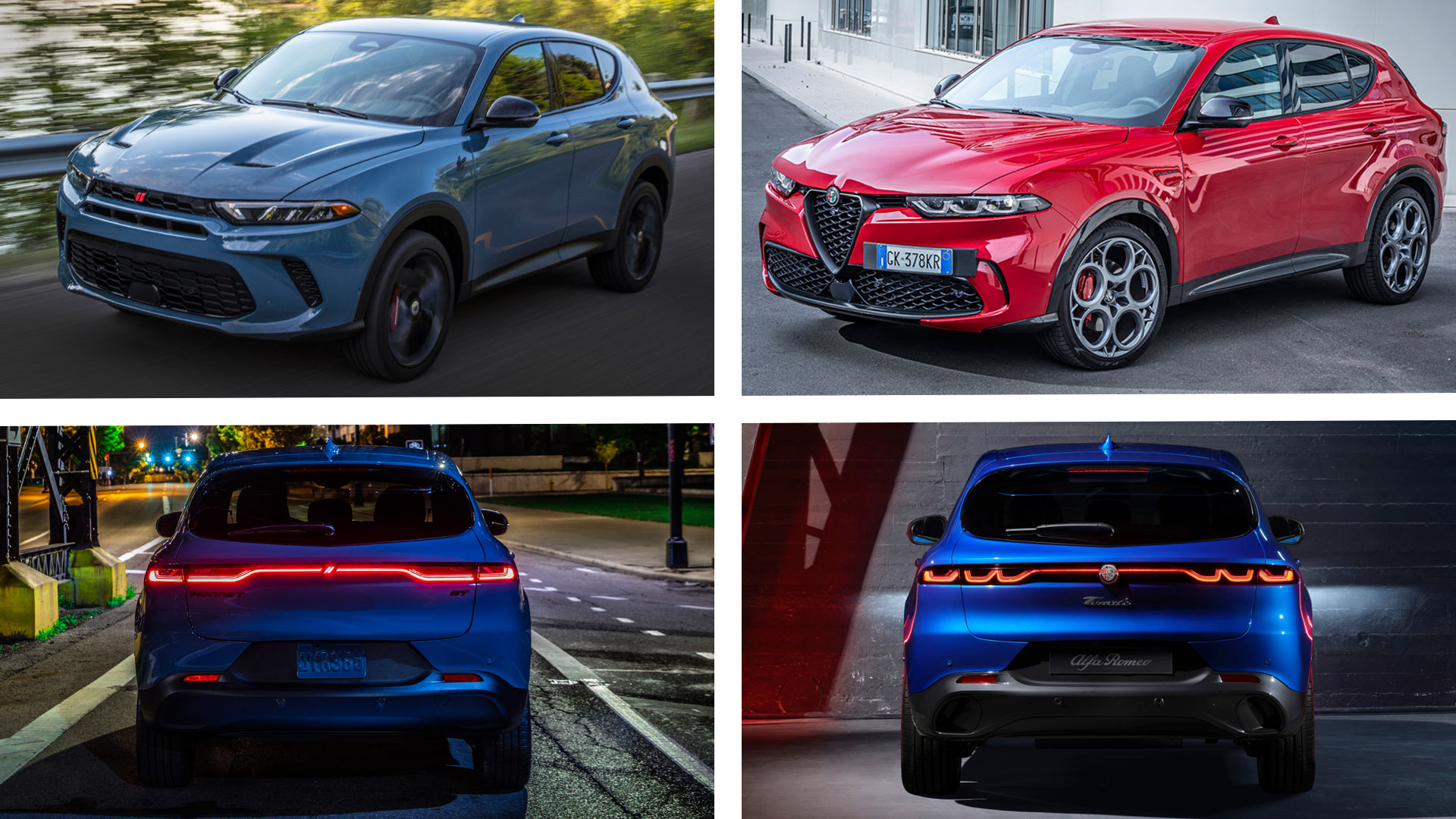 There’s no avoiding it, so let’s just get it out of the way. The Hornet is a badge-engineered version of the Alfa Romeo Tonale and a pretty blatant one at that.

So how bad is it? Even General – badge engineer all the things – Motors put more effort into differentiating the Chevrolet Trailblazer and GMC Envoy from the Saab 9-7X. As a result, the Hornet feels like a half-hearted copy and it’s almost like the design team started working on the front end, took a cigarette break, and never came back.

Despite that, the Hornet looks fairly nice. It certainly isn’t going to win any points for originality, but the model features a Dart-esque front end, streamlined bodywork, and a relatively handsome rear end that is virtually identical to the Tonale. 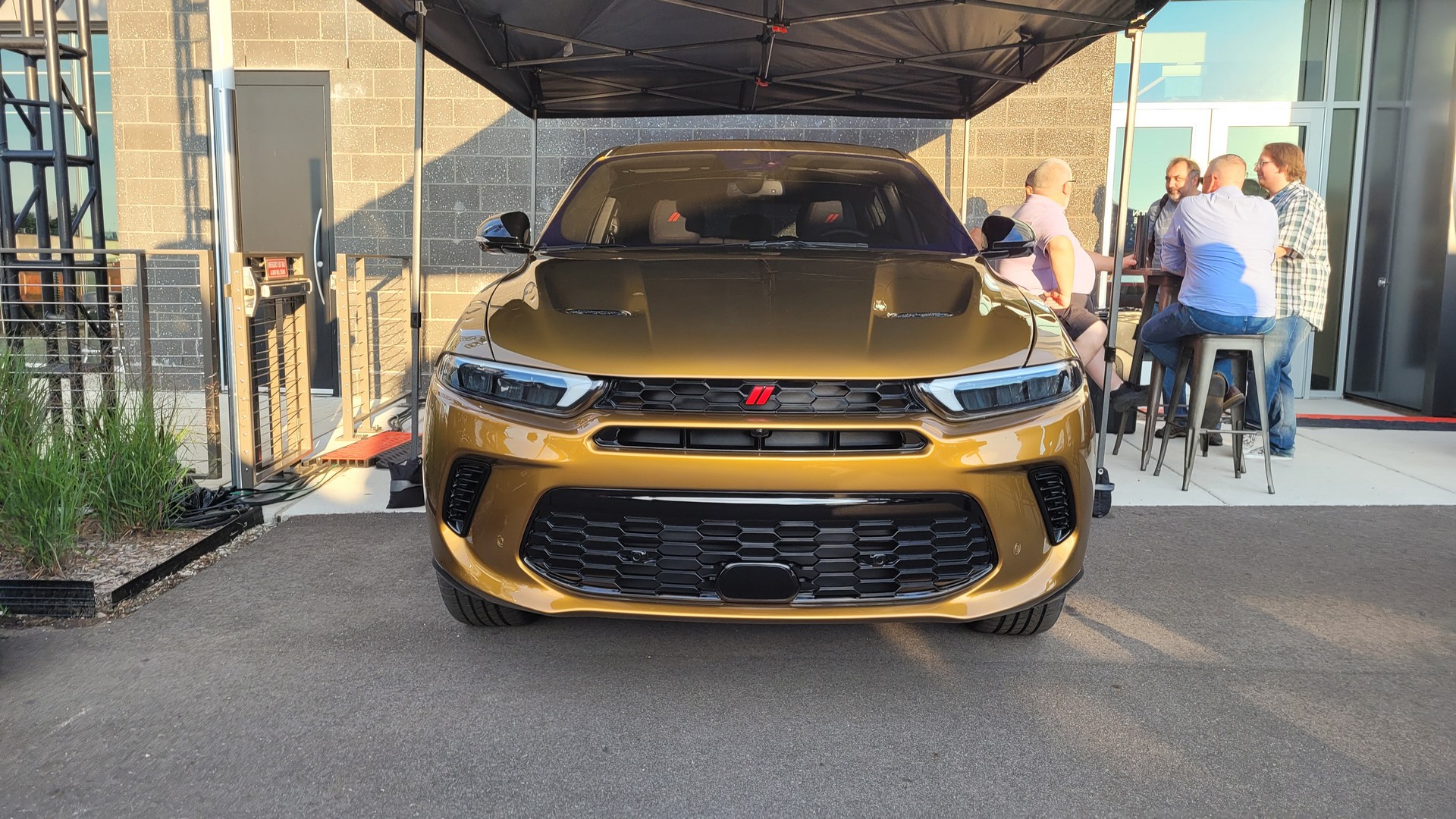 While it’s easy to chuckle at marketing claims such as having a “distinctive Dodge design,” the entry-level Hornet GT comes equipped with a ventilated hood and 17-inch alloy wheels. Buyers will also find plastic body cladding as well as 8 inches (203 mm) of ground clearance.

The plug-in hybrid Hornet R/T is more aggressive as it features a dual exhaust system, Abyss painted cladding, and a ride height that has been reduced by 1.9 inches (47 mm). The performance variant also rides on larger 18-inch alloy wheels, which are backed up by Brembo front brakes with black anodized calipers.

Buyers looking for a more aggressive appearance can order a Blacktop package, which adds gloss black badging and mirror caps as well as 18-inch Abyss alloy wheels. Customers can also opt for a Track Pack, which includes larger 20-inch Abyss wheels as well as red Brembo front calipers with the Dodge logo.

A Relatively Spacious And Techy Interior 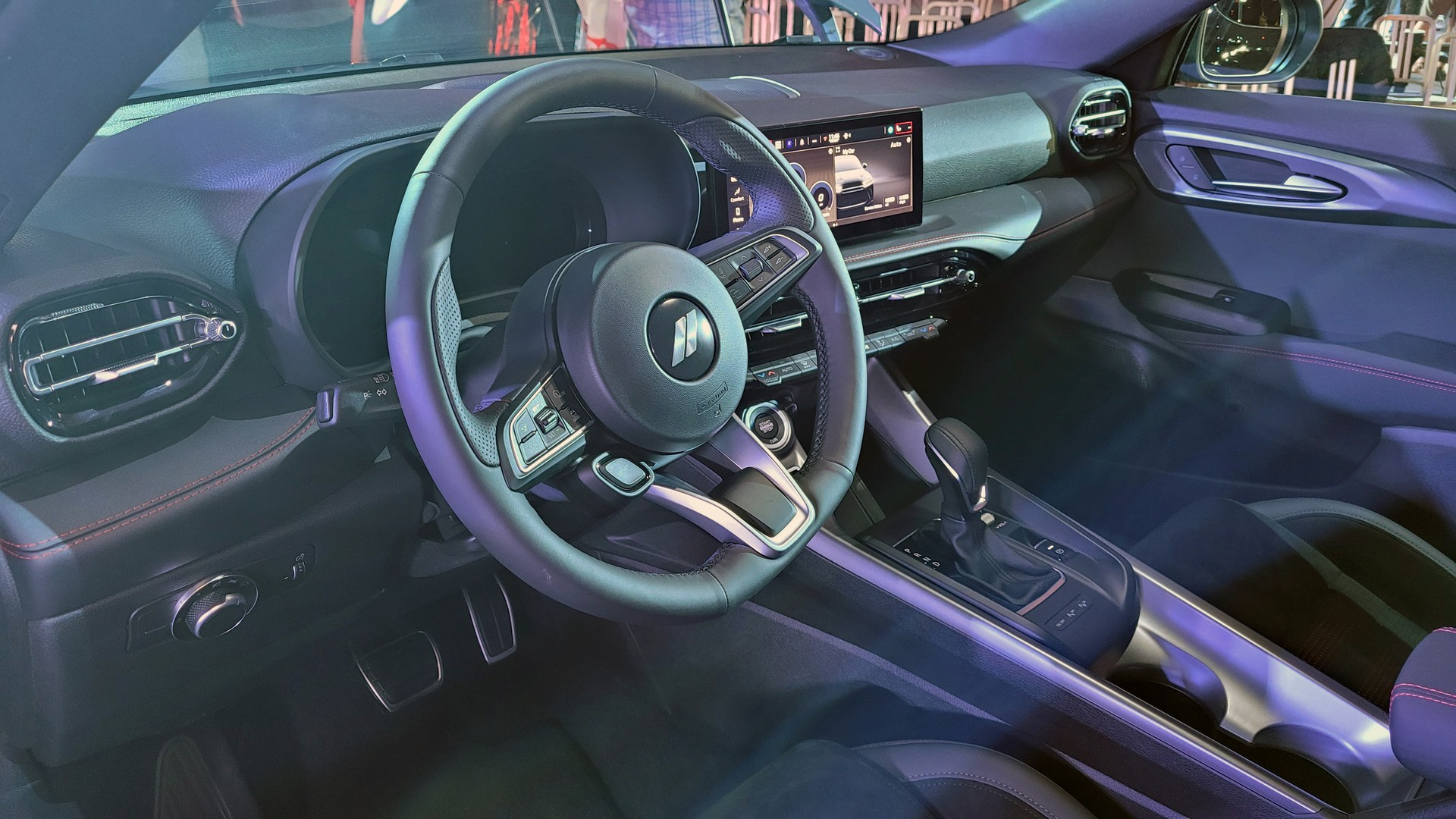 Dodge has built a reputation for performance, but their interiors have left a lot to be desired. Unfortunately, that streak continues with the Hornet as things are a bit of a mixed bag.

However, Dodge is embracing technology as the Hornet comes equipped with a 12.3-inch digital instrument cluster and a 10.25-inch Uconnect 5 infotainment system. The latter is Android-based and features Amazon Alexa as well as wireless Android Auto and Apple CarPlay compatibility.

Our experience with the infotainment system was brief, but positive as it offers fast responses and a logical layout. The latter is aided by virtual buttons for commonly used screens such as Home, Media, Comfort (Climate), and Phone. While we didn’t get to play around with the system for very long, Dodge says it offers extensive customization as well as music preferences, climate controls, and seat positions that can be linked to individual profiles.

Related: 14,000 Dodge Hornet Orders In 24 Hours? If Alfa’s Tonale Bombs Blame The Brand, Not The Car 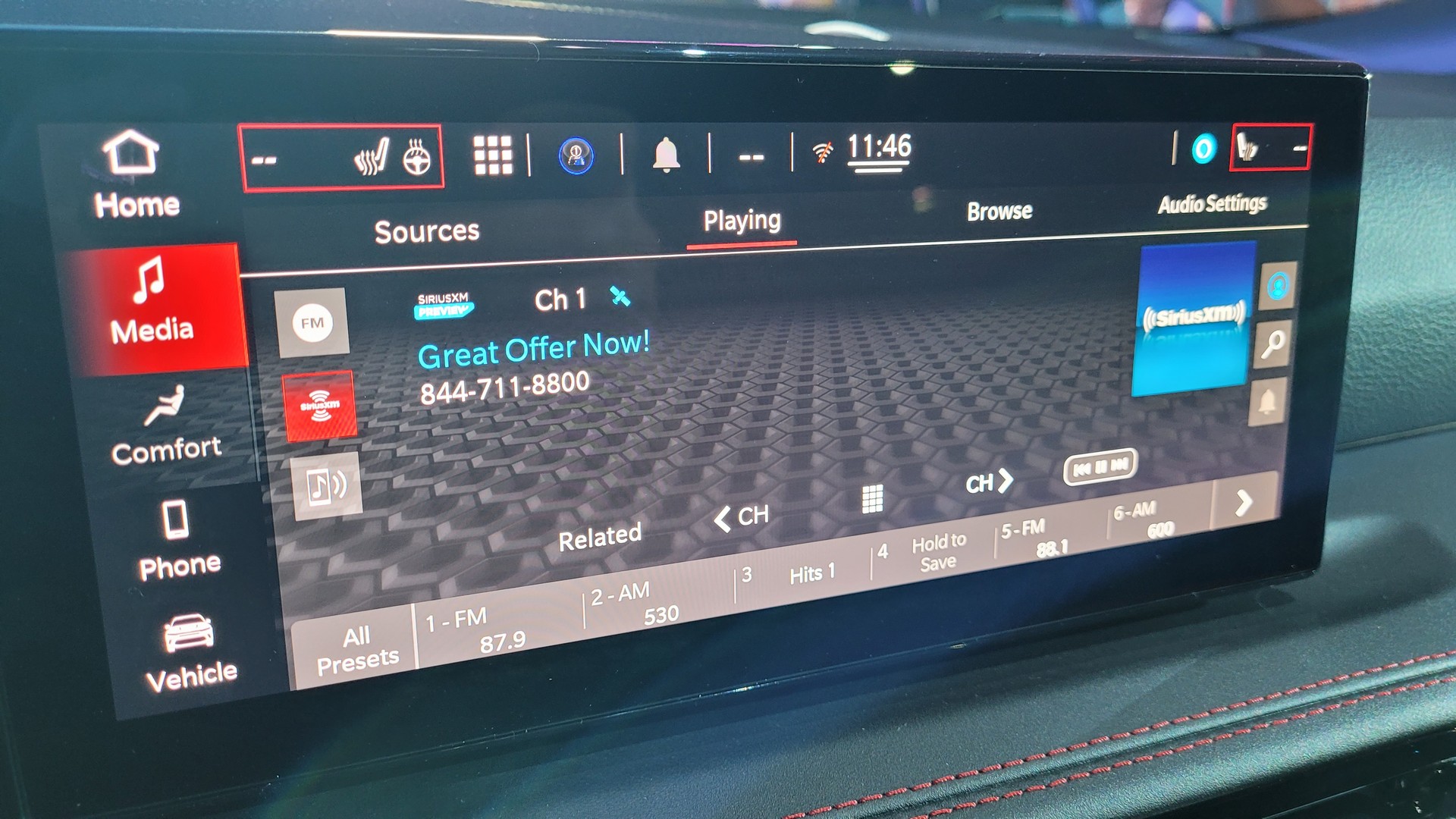 Another highlight is the rear seats, which are surprisingly roomy. Dodge hasn’t released detailed specifications at this point, but this 6’ 2” scribe found ample head and legroom. That being said, getting three adults in the back would be a tight squeeze. 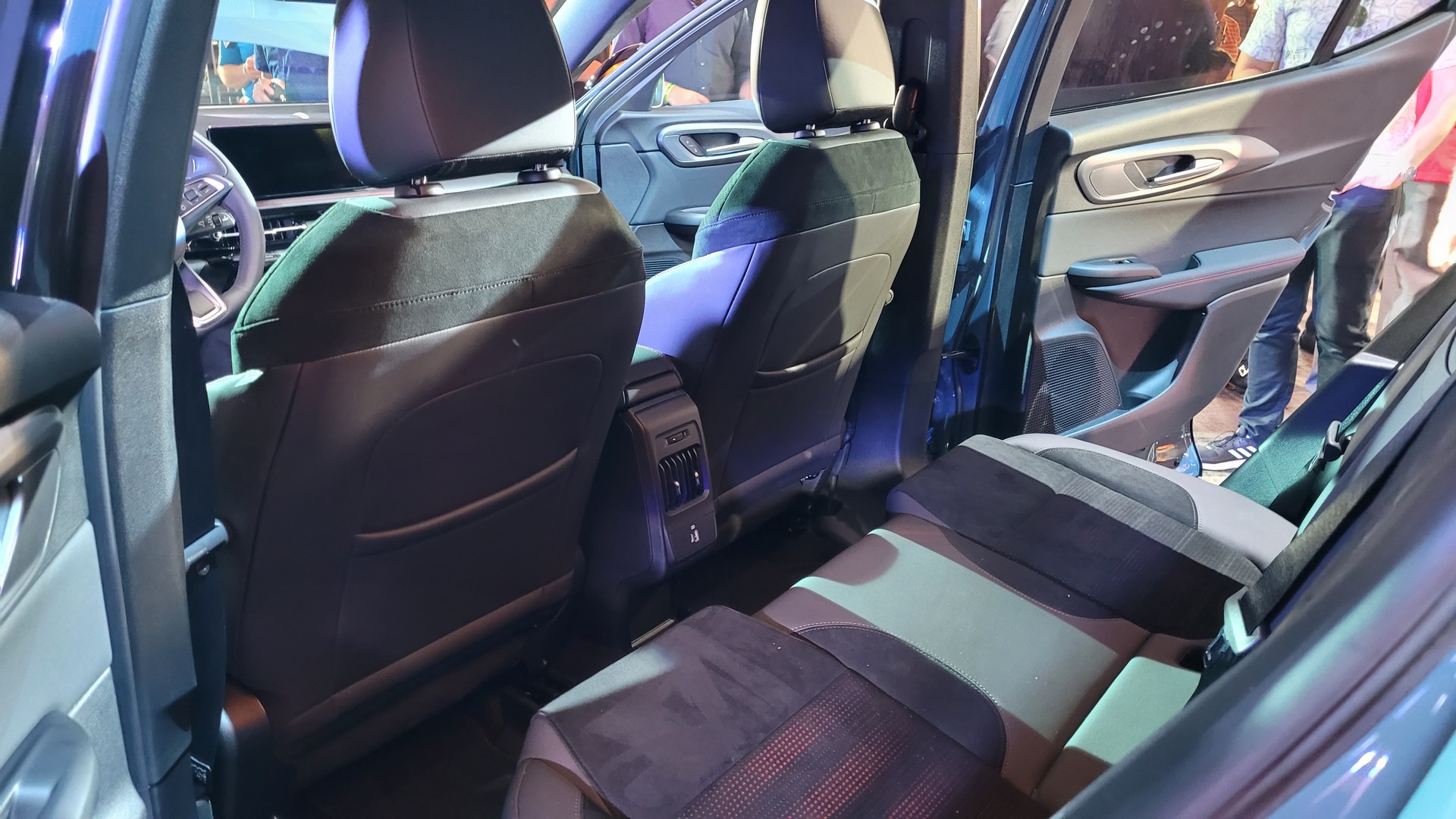 The Alfa origins are visible in the cabin as a number of controls carryover from the Tonale. However, the dashboard and air vents are unique to the Hornet, while some switchgear has also been changed.

Unfortunately, hard plastics are abound and some materials seem a bit low rent. That being said, touchpoints are padded and even the entry-level Hornet GT features cloth and leatherette seats as well as red contrast stitching that helps to break up the otherwise black abyss. 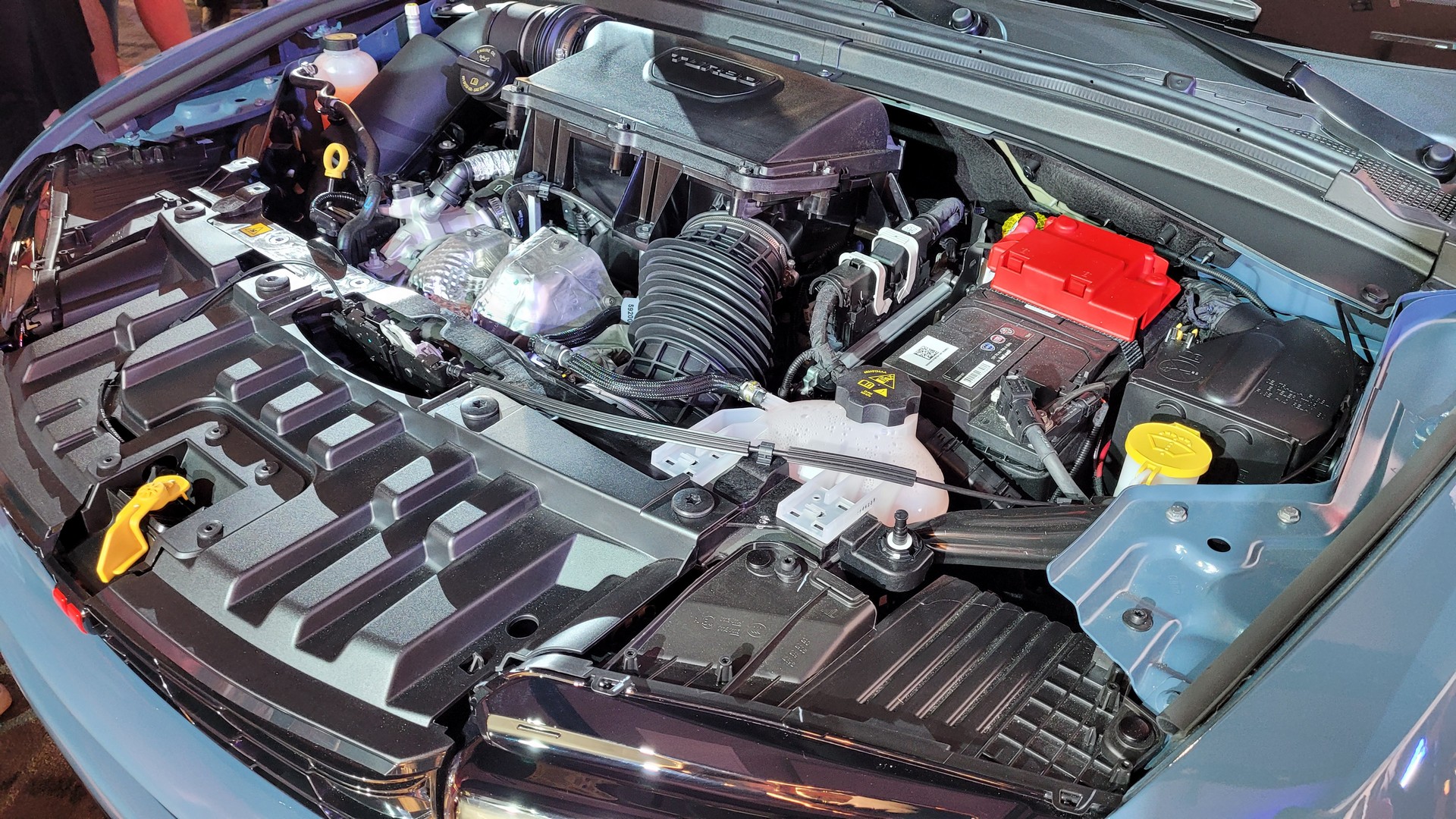 While a number of competitors offer a relatively tame entry-level engine, the Hornet comes standard with a turbocharged 2.0-liter four-cylinder pumping out 268 hp (200 kW / 272 kW) and 295 lb-ft (400 Nm) of torque. It’s connected to a nine-speed automatic transmission, which is paired to a standard all-wheel drive system with torque vectoring technology.

Customers looking for more performance and efficiency can upgrade to a plug-in hybrid powertrain that consists of a turbocharged 1.3-liter four-cylinder engine, a rear-mounted electric motor, a six-speed automatic transmission, and a 15.5 kWh lithium-ion battery pack. This setup gives the Hornet R/T all-wheel drive as well as a combined output of 288 hp (215 kW / 292 PS) and 383 lb-ft (519 Nm) of torque.  The latter once again bests the Tonale as its plug-in hybrid variant only produces 272 hp (203 kW / 276 PS). 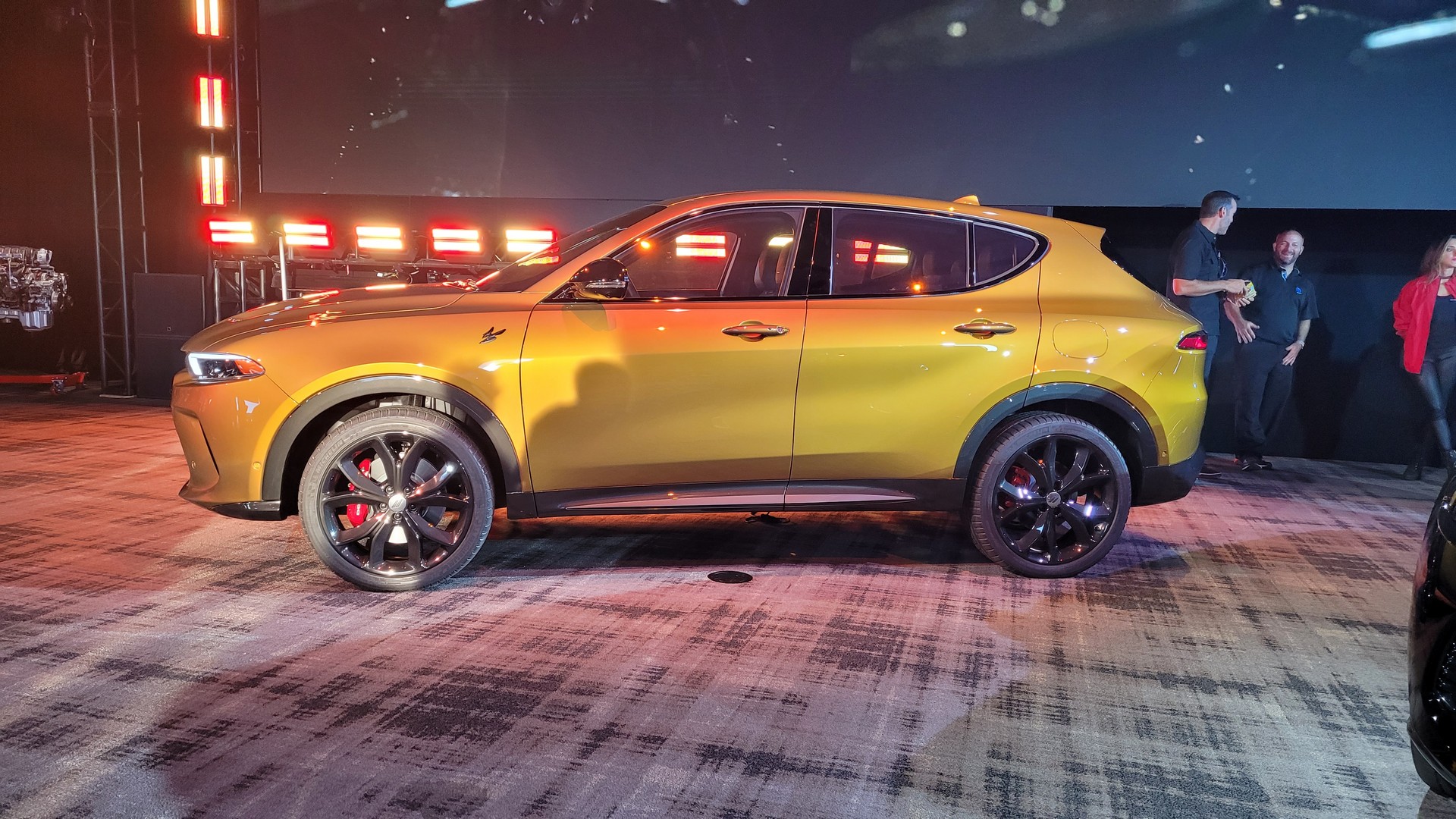 While some people may scoff at the idea of a plug-in hybrid wearing the R/T badge, the model clearly has the edge in terms of performance. Besides having more power and torque, the Hornet R/T is quicker as it accelerates from 0-60 mph (0-96 km/h) in 6.1 seconds. While the top speed is lower at 128 mph (206 km/h), buyers will find an electric-only range in excess of 30 miles (48 km). Furthermore, when the battery is depleted, it can be fully recharged in approximately 2.5 hours using a Level 2 charger.

Speaking of performance, the Hornet R/T has a PowerShot boost function that can deliver an extra 25 hp (19 kW / 25 PS) for 15 seconds at a time. Users activate PowerShot by pulling both steering wheel paddle shifters and “performing a pedal kickdown.” When activated, PowerShot knocks one second off the normal 0-60 mph (0-96 km/h) time and this should make for quick launches as well as easy passing.

Besides the powerful engine lineup, the Hornet promises to be a handler thanks to an independent front and rear suspension as well as a torque vectoring system that acts as an electronic limited slip differential in Sport mode. The crossover can also be equipped with an available “dual-stage-valve” suspension that offers driver-selectable damping. 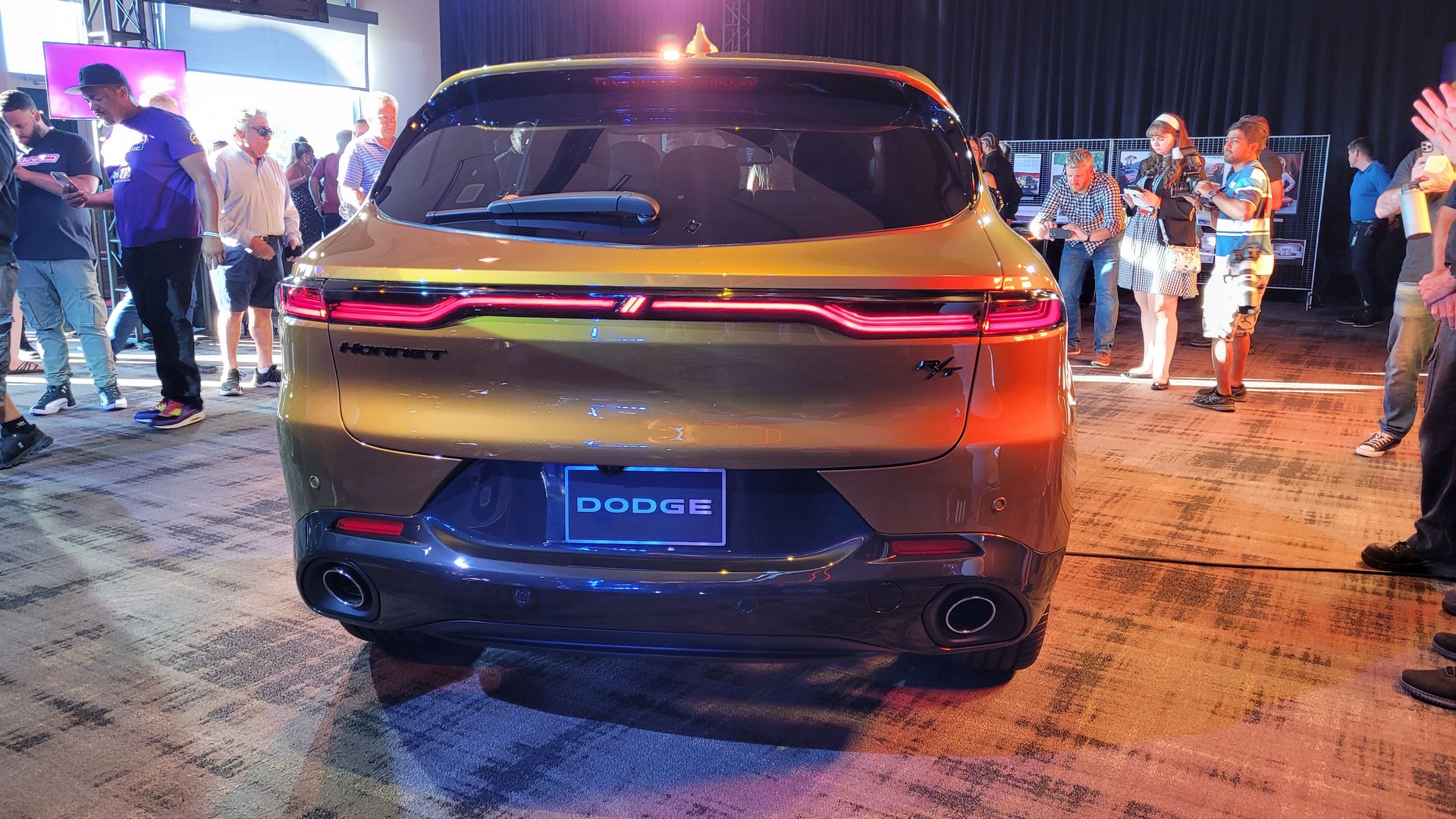 On the safety front, the Hornet comes standard with Automatic Emergency Braking with pedestrian and cyclist detection. The model also boasts Blind Spot Detection with Rear Cross Path Alert as well as a Lane Support System, which warns drivers when they’re straying from their lane and can automatically help to steer the vehicle back into its intended lane. Buyers will also find rear parking sensors as well as a back-up camera with guidelines.

The Most Important Dodge In Over A Decade 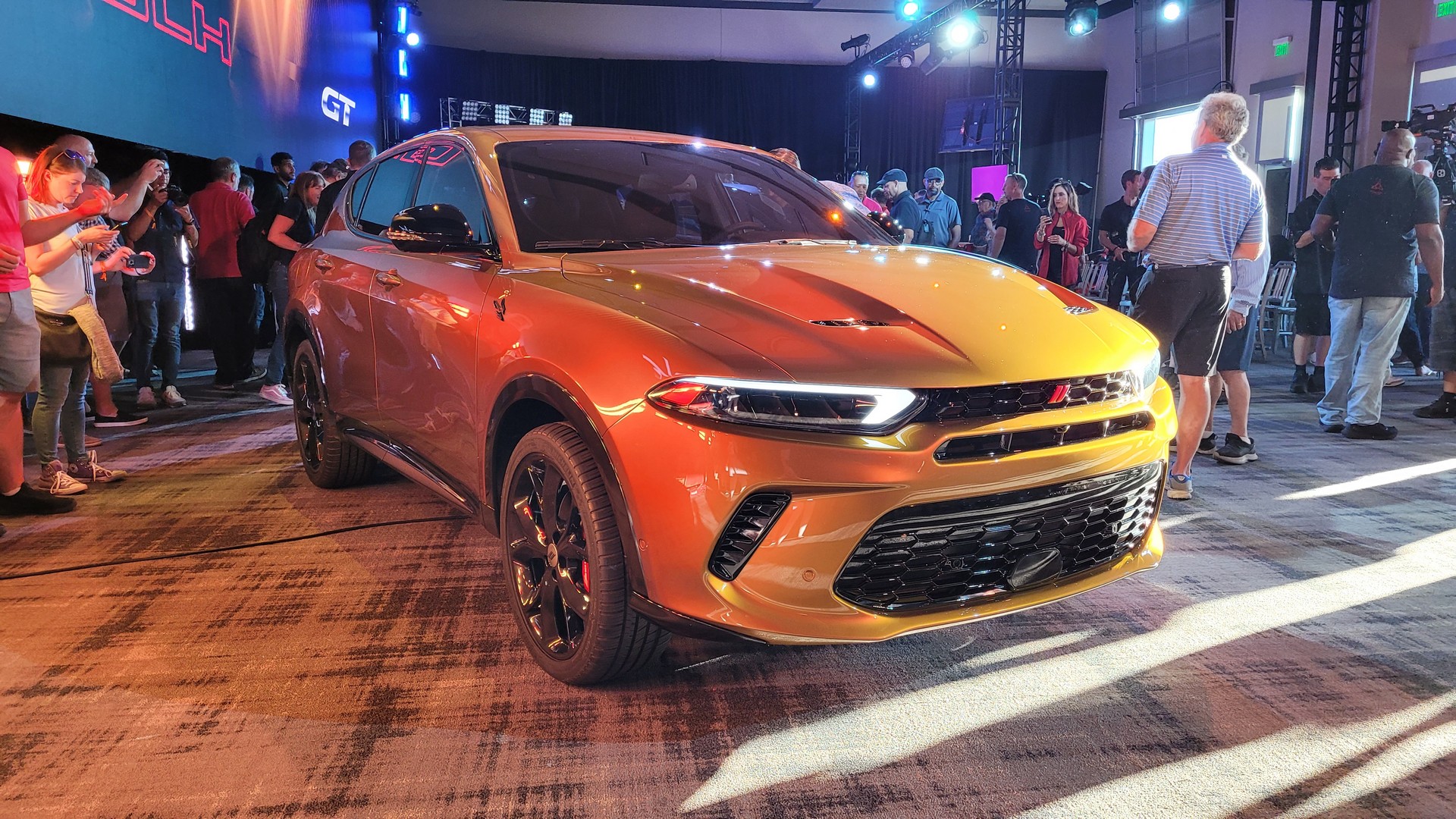 While it’s easy to write the Hornet off as a half-hearted, badge-engineered Alfa Romeo, that’s an overly simplistic take and it completely ignores how important the model is to Dodge. Not only is the Hornet a much-needed compact crossover, it’s also the first all-new Dodge in over a decade.

The latter is huge news and it’s clear there’s plenty of pent-up demand as the brand received 14,000 orders in less than 24 hours. That bodes well for the crossover and it means the Durango is no longer Dodge’s only SUV.

The Hornet GT is currently available to order and pricing starts at $29,995. Deliveries are slated to begin late this year, while the Hornet R/T is scheduled to arrive in showrooms next spring.