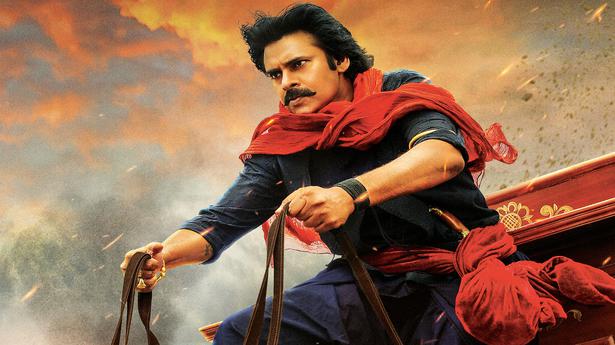 ‘The legendary heroic outlaw’ is how the makers of Hari Hara Veera Mallu describe the titular character essayed by Telugu superstar Pawan Kalyan. Krish Jagarlamudi directs the action-adventure film that narrates a story based on true incidents. The film’s new poster and a video glimpse described as ‘power glance’ was unveiled to mark Pawan Kalyan’s birthday on September 2.

Hari Hara Veera Mallu is billed as a historical drama and stars Nidhhi Agerwal as the female lead. The film is presented by A M Rathnam and produced by A Dayakar Rao. The poster shows Pawan Kalyan riding a chariot and sporting his trademark red shawl in what appears to be a war-like situation. According to the film unit, the story is set in the 17th century during the time of the Mughals and the Qutub Shahis.

The film will be released in Telugu, Hindi, Tamil, Kannada and Malayalam. Around 50% of the filming is complete and a new schedule will commence soon, says producer Dayakar Rao.

MM Keeravaani scores the music while V S Gnanasekhar handles the cinematography. The film will have dialogues by Sai Madhav Burra, production design by Thota Tharani and editing by K L Praveen.