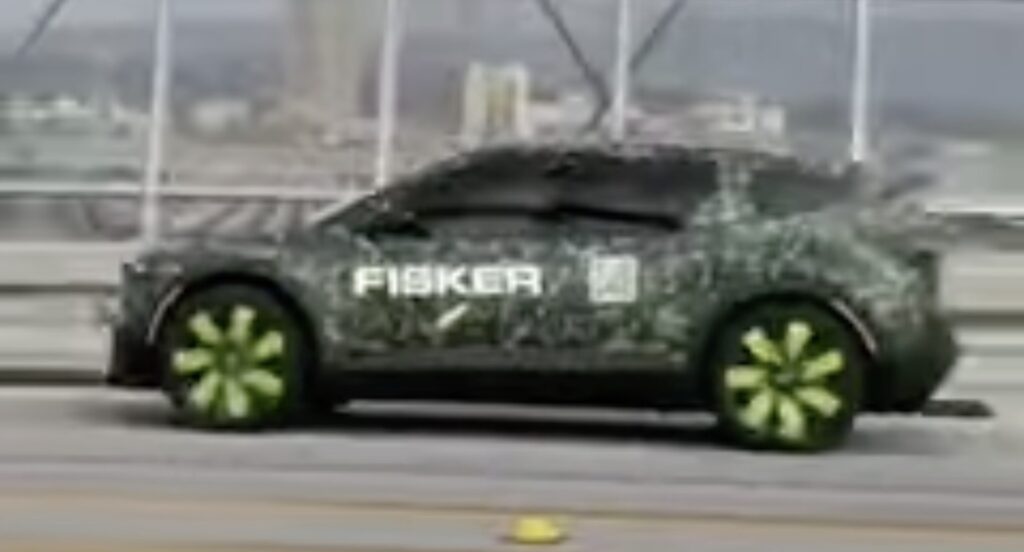 Back in May Henrik Fisker promised the first prototypes of his company’s Pear baby SUV would be ready by the end of the year. And video footage captured last weekend proves the CEO has kept his word.

The Pear will slot below the Ocean and be built at a former GM plant in Ohio by Foxconn at a rate of around 250,000 units per year starting in 2024. “Pear”, by the way, stands for “Personal Electric Automotive Revolution” and the promised $29,900 price will definitely ruffle some feathers in the EV market, particularly as its “made-in-USA” status means it will still qualify for federal tax credits.

The brief video hosted on the Fiskerati website shows the Pear crossing a bridge in Los Angeles dressed in a green camouflage wrap and rolling on huge, fluorescent green seven-spoke alloy wheels. And the same test car also appears on a couple of still shots on the @fiskerwhisperers Instagram account, giving us a much clearer look at the bargain baby EV.

Related: Watch How The Fisker Ocean Is Brought To Life In Austria

The footage and images show a clear family resemblance between the Pear and its Ocean big brother, which goes on sale next year, including the narrow strip of LED lights on the nose and equally slim black plastic wheel arch extensions.

But the Pear’s roofline seems to taper giving a sportier look, while the rear window is more upright, which should mean it still has the impressive trunk volume Fisker has promised. And though it’s hard to be sure how much faith we should put in the side window design in the rear quarter panel given how much disguise the car is wearing, it seems clear that the final window shape will be different from the stepped shape seen on the Ocean. The blacked-out windows don’t give us a chance to see inside the prototype either, but Fisker has previously released rendered images showing a minimalist cabin in which most controls are located inside a floating touchscreen.

The Pear will be offered with rear- and all-wheel drive and two battery packs including a Hyper Range variant with over 310 miles (499 km) of range. It will also offer a SolarSky panoramic roof whose solar panels collect the sun’s energy and recharge the vehicle while parked. What do you think of the Pear’s styling? And should Tesla, whose own baby car is still several years away, be worried? Leave a comment and let us know.