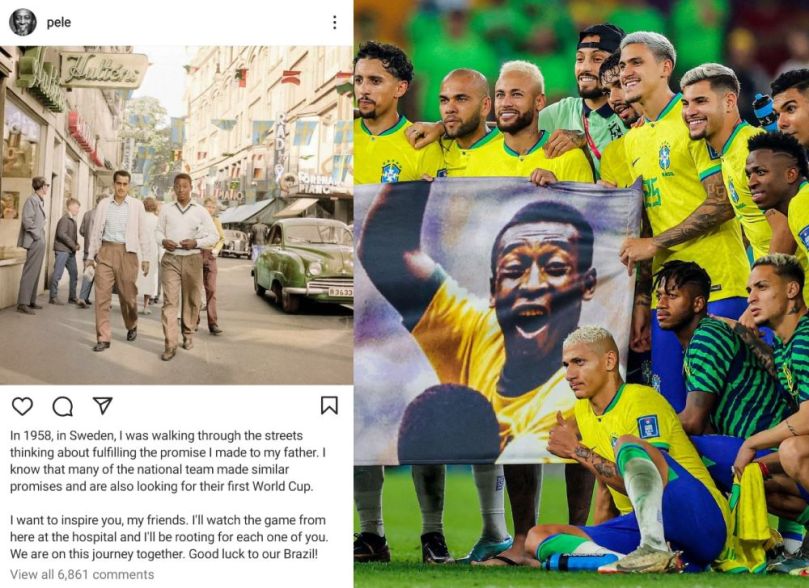 FIFA World Cup: Pele Health Update – Brazil players paid a perfect tribute to Pele after demolishing South Korea 4-1 to seal their spot in the quarterfinals of the FIFA World Cup. Following their win, the Samba boys unleashed a banner of Pele to showcase their support. The Brazil team played typical Joga Bonito football to destroy their opponent and showcase their tribute to his country great. Follow FIFA World Cup 2022 LIVE updates with InsideSport.IN.

Soccer great Pele on Monday backed Brazil’s national team ahead of their World Cup round of 16 match against South Korea, saying he will watch the game from hospital after being admitted there last week as he battles colon cancer. Pele, 82, said in an Instagram post that he wished to inspire Brazil’s players by sharing a picture taken at the 1958 World Cup in Sweden, when the then-teenager shocked the world leading the South American side to their first title.

FIFA World Cup: Brazil Legend Pele to back Samba Boys from Hospital, says ‘We are on this journey together’ – Check Out

“I’ll watch the game from here at the hospital and I’ll be rooting for each one of you,” Pele said ahead of the match starting at 1900 GMT in Qatar. “We are on this journey together. Good luck to our Brazil!”

Internationally revered as one of the greatest footballers of all time — if not the greatest — Pele had a tumor removed from his colon in September 2021 and has been receiving hospital care on a regular basis.

He was hospitalized last week to re-evaluate his treatment and is also being treated for a respiratory infection, according to medical reports.

Pele played for Brazil and club sides Santos and New York Cosmos as a striker. He helped lead his country to three World Cup championships three times – in 1958, 1962 and 1970 – a feat no other player has achieved.

Brazil are seeking to win a record-extending sixth world title.

FIFA World Cup: Brazil Legend Pele to back Samba Boys from Hospital, says ‘We are on this journey together’ – Check Out