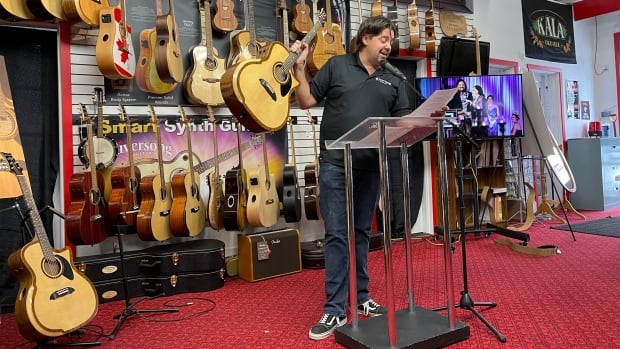 Three of the biggest names in the business were up for the award.

But the nod for acoustic guitar of the year for 2022 didn’t go to Yamaha. And it didn’t go to Taylor Guitars or Martin Guitars — it went to Riversong Guitars of Kamloops, B.C.

Riversong’s P2P River Pacific was announced on Sunday as the acoustic category winner in the prestigious Musical Merchandise Review (MMR) Dealers’ Choice Awards. In the 30-year history of the international awards, Riversong owner and P2P guitar inventor Mike Miltimore said this is the first time a Canadian company has won acoustic guitar of the year.

“It means through hard work, perseverance, innovation, a small-town Kamloops company can make a splash on the world stage,” Miltimore told CBC’s Daybreak Kamloops on Monday.

“With a marketing budget that probably rivals our contemporaries’ coffee budget, this award means so much more.”

Compared to family-run Riversong, Yamaha is an international giant. Taylor Guitars — with more than 1,200 employees and factories in the United States and Mexico that pump out hundreds of guitars each day — is no small operation either. And Martin Guitars has time and tradition on its side. It has been around since 1833 and has supplied guitars to some of the most famous names in music history — from Elvis Presley and John Lennon to Ed Sheeran and John Mayer.

Guitar dealers from around the world cast votes in the MMR awards.

In reference to Riversong’s P2P River Pacific acoustic, MMR wrote: “Every now and again, a smaller brand manages to sneak up and eke out a win in categories traditionally dominated by the big boys. And this year, Mike Miltimore’s team of Canadian craftspeople did just that. The River Pacific … is a true luxury guitar that is within reach for the many. The Riversong team really hit it out of the park with this one.”

A patented design feature of the guitar is a neck that runs all the way through the inside of the body, which Miltimore says helps create “perfect intonation playing up and down the neck of the guitar.”

Miltimore said the P2P River Pacific is Riversong’s best-selling guitar. Among those who play it on stage, he said, are country superstar Eric Church and the up-and-coming Priscilla Block, who was named new female artist of the year at the 2021 Academy of Country Music Awards.

“She was just on the Grand Ole Opry, and we built her a couple guitars,” Miltimore said.

Miltimore said it’s an accomplishment just to be nominated for an MMR award. This year, Riversong was nominated in four categories, including product of the year, electric guitar of the year and ukulele of the year.

Riversong Guitars was founded by Miltimore’s dad, Lee, in the 1970s.

“I grew up in this company as a little kid,” Miltimore said.

“For me, I fell in love with guitars, those days, pre-teen, when I was taking them apart and looking at the innovation — the spirit of how somebody would just create something that never was created before and try to make it better. There’s thousands of inventions in the guitar world, and it really attracted my attention.”