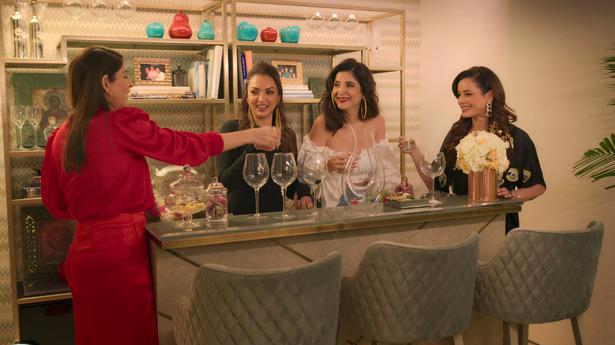 The second season of the reality show fails to engage, as it continues to hide the industry behind bland storylines

The second season of the reality show fails to engage, as it continues to hide the industry behind bland storylines

Fabulous Lives of Bollywood Wives is a relatively novel and underutilised reality show concept for the Indian market, where though it had the potential to be successful, has ultimately been bogged down by its own machinations. The second season, like its predecessor, has chosen to stretch out vague storylines devoid of substantial characterisations, which unfortunately does not make for fabulous reality television.

Two years on since the first season aired in 2020, Maheep Kapoor, Bhavana Pandey, Neelam Kothari and Seema Sajdeh usher us into their COVID-impacted lives. We are made to know this when Seema chides Neelam for using a tissue. “Hasn’t the pandemic taught you anything?” she asks as the four lunch together on a yacht, dressed in finery fit for a wedding, with the blurry Mumbai skyline in the background.

Storyline: Cameras offer a peek into the private lives of Bollywood families as they juggle stardom and personal issues.

Seema expresses appropriate anger about the harmful effect of disposable utensils, from the deck of the yacht, when Bhavana hits back, “What about the plastic three of you are putting on your faces?” The moment is confrontational in a candid manner, it brings up a topic that is fervently discussed in the comment section of celebrity social media posts, and it is elevated when Maheep retorts with, “How dare you talk about my plastic?” It has the makings of a tried and tested good reality show that you can ‘cringe-watch’. Unfortunately, it only lasts for this moment, while the upcoming eight episodes adopt a different, less fun genre of television altogether.

The cameras follow these four around on their daily routine, which comprises accompanying their star kids on a magazine cover photo shoot, accompanying their friend on a photo shoot for her interior design catalogue, and finally accompanying a director for a film shoot. However, none of these adds to the existing information we already had about the inner workings of Bollywood, and the extended star cast of Ananya Pandey, Gauri Khan, and Karan Johar fail to entertain you in the ways that they should.

If the show’s premise and appeal hinge on pulling back the curtain on one of the most talked-about film industries, then it is a failure for the show continues to guard its secrets. Bollywood, especially its upper echelons, has had a shy relationship with the audience, which is evident from how mundane revelations are chewed on for days on end by media outlets. Since the pandemic, this interaction has undergone a massive shift, where it is now mediated largely over heavily curated social media profiles. While this show was a chance to fill in that communication gap, it doesn’t take the opportunity to do so.

A chunk of this season’s plot revolves around unresolved tension from the past between Maheep and Bhavana, and between Neelam and Seema. The issue at hand is vaguely described giving no explicit information. Despite the disagreement being significant enough to figure into a multi-episode storyline, we get no characters, no plot, and therefore, no frame of reference for what they are bickering about. Consequently, the audience has little investment in the fight and their drummed-up patch-up scene ends up carrying no impact.

Shows like these, whether they deal with Real Housewives across the length and breadth of America, or zoom into the Bling Empire, ultimately end up being cringe-y. The audience is removed from the show’s setting to such extent that the character’s daily routine is absurd and hence entertaining enough.

Fabulous Lives of Bollywood Wives sidesteps all of that to script a show about humanizing Bollywood kins and delivering a sermon on female friendship. And it is a script that fails. However, it also begs the question of whether something more could ever be expected when Bollywood is scripting its own drama. For an industry that has revelled in the overdramatic, and perfected the melodramatic, when it turns the camera on itself, the rendition falls flat.

Reality television works when the participants strike a balance between offering not only their carefully manicured lives but also the dishevelled moments of vulnerability. This show, however, fills its time with juvenile bickering, numerous photoshoots, and lunches that feel like staged interactions, and if the audience wanted to see that, they are anyway available on their Instagram stories.