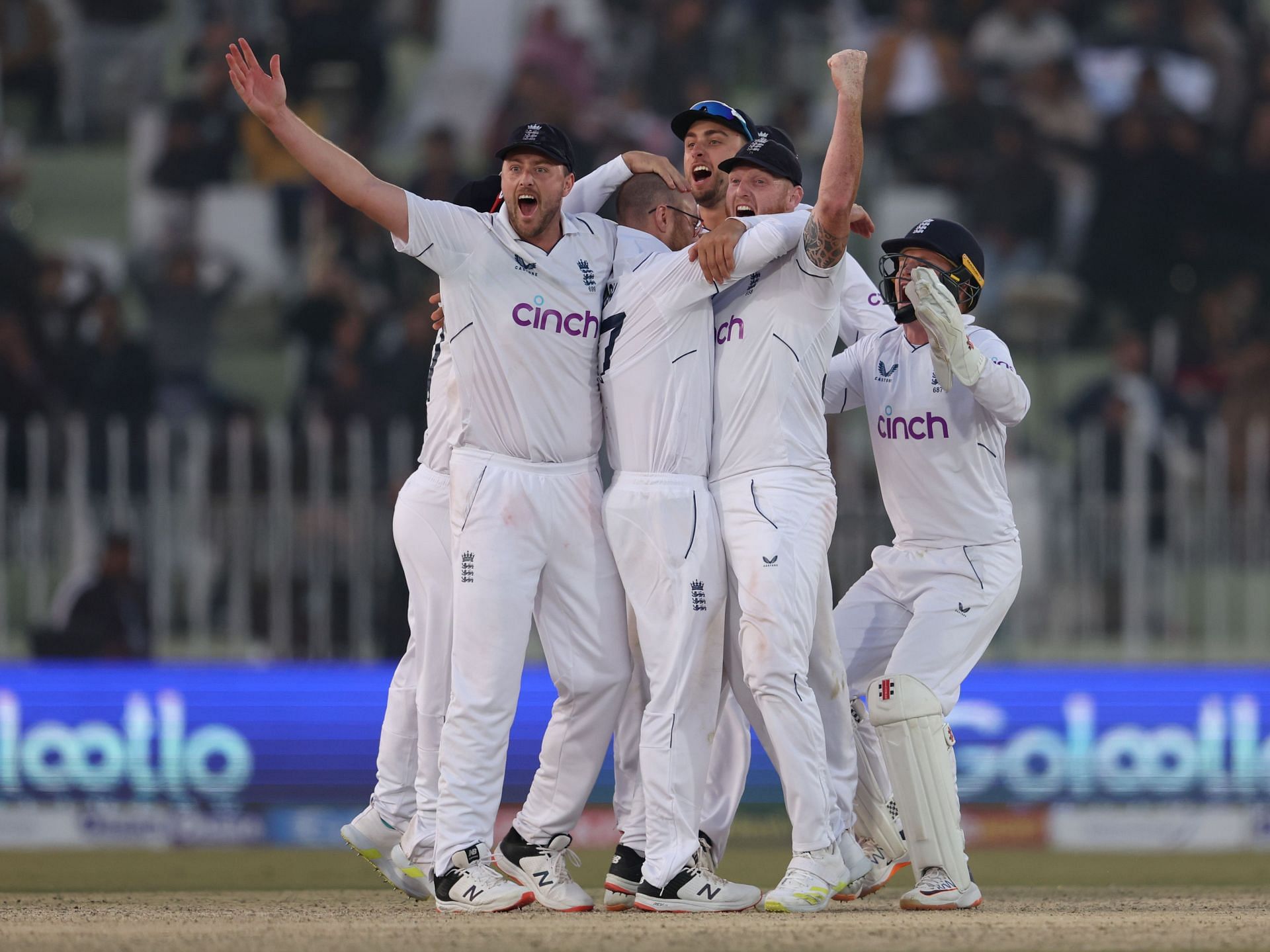 December 4, 2022. The sun is beating down on what is already a very placid Rawalpindi pitch. England seem to hold all the aces but with the surface offering nothing in terms of assistance, a draw seems the likeliest outcome.

Fans, so far, have not minded the nature of the contest. Because Test cricket in Pakistan has been such a luxury in recent times, they are just glad that they are watching any sort of contest. England, to their credit, have provided plenty of entertainment to those who have turned up. They rattled along at more than six runs per over, and that has continued in the second innings too, scoring at more than seven runs every over.

Such buccaneering batting often leaves a residue – more often than not, it is in the form of wickets. England, at Tea on Day 4, have lost seven wickets and are only leading by 342. Liam Livingstone, white-ball marauder but on Test debut, is still around, though. And almost everyone in the world knows the amount of destruction he can cause.

So, if England were to think of maybe adding fifty more runs before declaring, not many would have complained. In fact, that is how Test cricket has been played all these years – make the game safe first, and then think about how you can win it.

But England, under Ben Stokes and Brendon McCullum – the power couple Test cricket never knew it needed — don’t do things as convention warrants it. Instead, they do things that they believe in, and once they decide on it, they go through with it. When they speak, the world listens. Not because of how charismatic they are, but because they walk the talk – something most others don’t do, especially when put under pressure.

A day later, all of England, McCullum and Stokes’ choices are vindicated. In the fading sunlight, on arguably the most placid pitch these guys have ever played on, Jack Leach zips past Naseem Shah’s inside edge and traps him in front.

The initial reaction is to applaud Leach, who lest we forget, was not a regular under previous captain Joe Root. But as the moment settles down a touch, you can’t pinpoint one particular individual that has enabled England to pull off this historic victory.

And that is why this team, despite being together for just a few months, is amazing. They all know who their leader is. They love him to bits, and would probably run through a brick wall if that was what Stokes asked them to. Their captain, though, also knows that for this ultra-aggressive philosophy to work, he needs every member of the squad invested in the cause. No ifs and buts.

England were brilliant throughout the Rawalpindi Test

On Day 1, England broke all sorts of batting records. Chronicling them in this particular article might not make much sense because that has been well-documented already. Even on the opening day, they were clear how they wanted to approach this Test.

They could have sat back, like Australia did earlier in the year at this very venue on a surface that resembled a runway more than a cricket pitch. But they did not. They risked losing the game because they thought they ought to win this contest.

With the ball, too, their plans were a deviation from what is deemed conventional. In Pakistan, spinners are normally expected to play a crucial role. Instead, England used their fast bowlers to perfection, extracting a ton of reverse-swing. Anderson and Robinson, in particular, were superb.

Both of them, by the way, have had questions raised over their suitability in the sub-continent. Anderson, largely because of his age. Robinson, because he has not played a lot on these shores. The pair, however, answered those critics emphatically, almost using a ploy that Pakistan had once made famous in the 1990s, and moving away from what comes naturally to them.

Eight games, especially in this format, is not an indicator of how successful a side is going to be. There is a chance that England will rock up in India, where the ball will turn square and deflate the bubble of positivity they are currently carrying. Will England look to do things differently, though?

Perhaps not. And that is the key takeaway from this historic Test. There will be days when this approach falls flat on their face – days when they will get shot out for a paltry total and people will ask them why they need to bat with such urgency in a game that lasts five days. In the Stokes-McCullum era, though, there is no backward step. The only time they look backwards is to see how far they have come.

Remember, it was not long ago that England were losing Tests in all shapes and sizes. They were being blown away in Australia. They were being ripped to shreds by India. England were even being thumped in the West Indies. And here they are now. Not worried about losing because they believe that what they are doing will lead to more wins than defeats.

In many ways, England have challenged the age-old traditions of Test cricket and are daring to leave everyone behind. Of course, one game does not mean that they have already done so.

But if you keep overlooking how they have, almost single-handedly tried to change how Test cricket is to be played, and if you have not really appreciated what they are trying to do – especially in an era where each and every mistake will be magnified and criticised on social media, maybe you’ve been watching the sport wrong all along.

England, through sheer will, bravery and courage, injected life into a lifeless pitch in Rawalpindi. So much so that if this team ceased to exist tomorrow, they would still have a chapter to themselves in cricketing folklore. That should tell you all you need to know about how special this performance was.