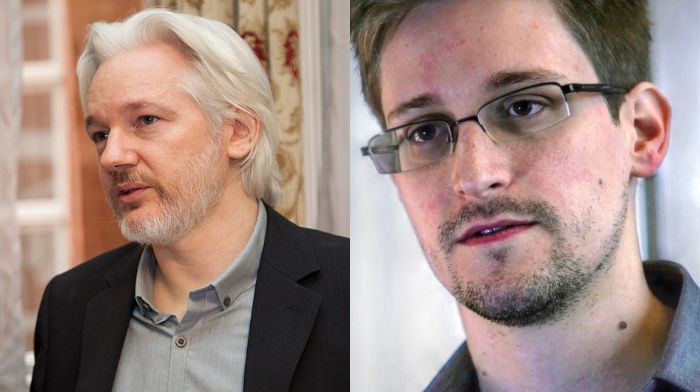 This week the news is all abuzz about the Twitter Files scandal. It turns out we weren’t all crazy and that, yes, of course, Twitter was pressured to suppress the Hunter Biden laptop story by the Biden team to keep it from affecting the upcoming presidential election.

Still, most mainstream media coverage focuses on either downplaying the info dump or ripping on the messenger of said information; because there is no actual brotherhood code in journalism.

So it wasn’t long after the walls of Twitter came tumbling down that Elon Musk posted a poll, which I participated in since I’m a sucker for an excellent, provocative poll.

I am not expressing an opinion, but did promise to conduct this poll.

Should Assange and Snowden be pardoned?

It’s no surprise, given the nature of what Twitter and Matt Taibbi were participating in – disclosure of embarrassing government information – that the poll was related to the two men who made modern disclosure hip; Julian Assange and Edward Snowden.

The Public Has Spoken

The poll from Elon came shortly after a live Twitter session after the long-awaited first installment of TwitterGate. During the live session, Mr. Musk opined on many topics, specifically Edward Snowden’s fate.

Elon stated that he believes the American citizens should decide his ultimate fate, not the U.S. Government. So this prompted one of his infamous polls in which he asked:

“I am not expressing an opinion, but did promise to conduct this poll. Should Assange and Snowden be pardoned?”

Of the over three million people who responded, the results were 80.5%, for yes, they should be pardoned. Too bad for Assange and Snowden that Elon doesn’t have the power to pardon… yet.

Mr. Snowden, not known for shying away from Twitter, replied to the results of the poll stating the obvious:

“That is a very big number.”

So why the interest in Assange and Snowden? Let’s take a trip down memory lane to find out.

There were plenty of replies to Elon’s poll that you can’t combine the two men because the two men did different things that have them in hot water with the U.S. government, and I have to say I agree.

Julian Assange published information he received from a source within the United States Army, the soldier formerly known as Bradley Manning, in case you forgot.

Supporters of Mr. Assange say he is an anti-establishment hero journalist who exposed U.S. wrongdoings in Afghanistan and Iraq.

Those who are not on Team Assange say he put the lives of U.S. agents at risk when he published the leaks from Bradley Manning.

Mr. Snowden calls himself a whistleblower, whereas others claim that he didn’t follow whistleblower protocol, which, technically, he didn’t have since he was a contractor. Quite the rub there for Mr. Snowden.

Mr. Snowden currently resides in exile in Russia with his wife and two sons. Most notably and recently, he pledged the oath of allegiance to Russia, which earned him a passport and critical protection.

“…under the Russian constitution, he cannot be given up to a foreign state.”

I’m in Russia because the White House intentionally canceled my passport to trap me here. They *downed the President of Bolivia’s diplomatic aircraft* to prevent me from leaving, and continue to interfere with my freedom of movement to this day.

In case that was unclear. https://t.co/hOb2Azc41G

So it is unlikely Mr. Snowden will return to the U.S. anytime soon. Nor do I think this pledge will ingratiate him to members of our government.

It wasn’t that long ago that there might’ve been some hope for Mr. Snowden. Former President Donald Trump was toying with the idea of pardoning Mr. Snowden but never did get around to it, much to the consternation of some of Trump’s supporters.

While Mr. Snowden’s decision to pledge allegiance to Russia leaves a sour taste in this patriot’s mouth, I can’t say I blame him, given his complete lack of options. He accurately has explained numerous times that there was never going to be the possibility for a fair trial in the United States for him – or Mr. Assange, for that matter.

The law they were charged with forbids a public interest defense, meaning the jury can’t take their motives into account. So I guess it do svidaniya for Mr. Snowden.

It Could Happen To Them

I think Mr. Assange’s case is the one that has a better correlation to the Twitterfiles and, in general, the risk journalism faces in our country. Recently the editors and publishers from major outlets, including The Guardian and the New York Times, wrote an open letter stating:

“This indictment sets a dangerous precedent, and threatens to undermine America’s First Amendment and the freedom of the press.”

“…if you’re able to prosecute Julian Assange for what he did, you can prosecute the New York Times and The Guardian very easily for publishing the same material.”

Mr. Greenwald goes on to break down expertly what exactly Mr. Assange did:

“He got information in the public interest from somebody else who took it, and then published it.”

It sounds much like what reporters and journalists are supposed to do.

The ongoing attacks on Matt Taibbi from jealous employees of NBC, CNN, the Daily Beast and collapsing Brookyn-based digital outlets is a form of stochastic terrorism that is literally putting him in harm’s way and straight-up inciting violence against him and his family. cc: @FBI pic.twitter.com/F6QqesoQTO

Should Assange and Snowden receive pardons? At a minimum, they should receive fair and open trials.

Will they receive fair and open trials? Not a chance, which is a disservice to them and the American public, who deserve to know the truth.

Perhaps the greatest injustice, in my humble veteran opinion, is that the individual who leaked the information to Julian Assange is free as a bird. Chelsea Manning, formerly Bradley Manning, was released early by former President Barack Obama after only serving seven years of a 35-year sentence.

What earned this soldier an early release? Suicidal ideations due to their transgender transition.

We live in an interesting system where a military member who has taken an oath and signed specific disclosure documentation can be released early from prison even though they stole information and leaked it to the media. While the investigative journalist who published said information is sweating it out over an appeal to their extradition to the United States.

Better be careful, Elon and Matt; you might be next.