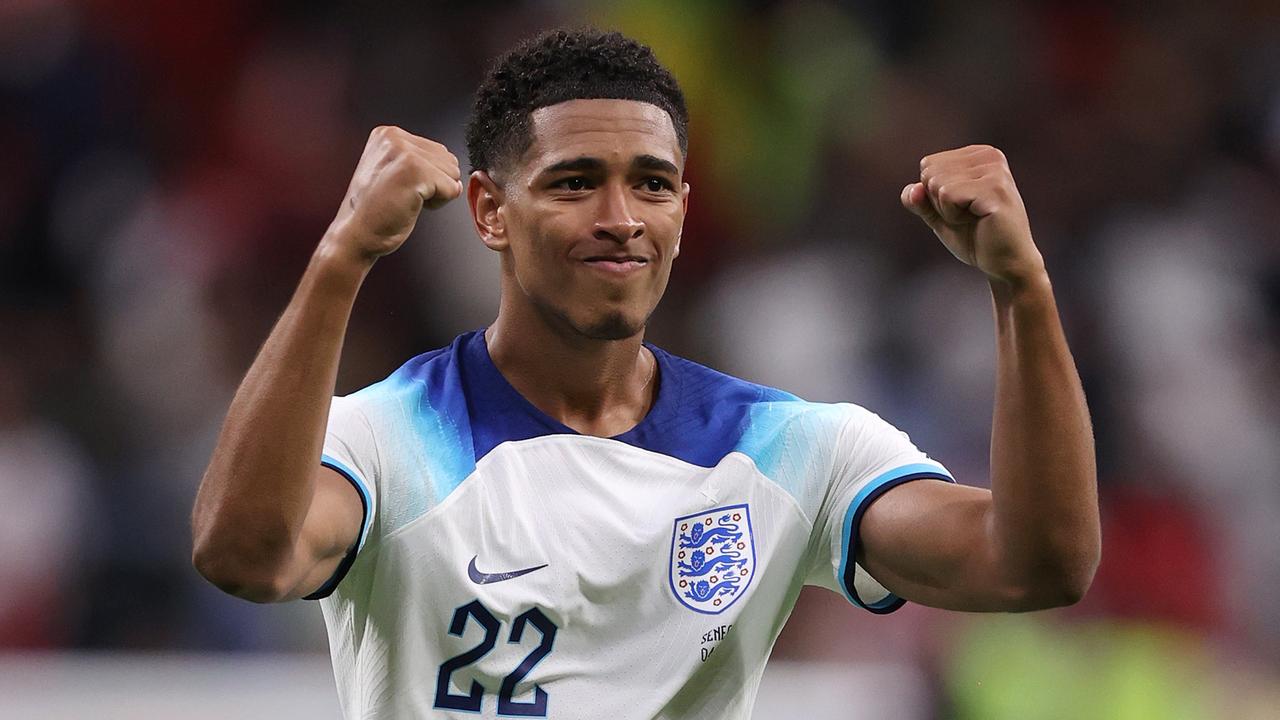 Jude Bellingham was already a star on the rise before this year’s World Cup but the 19-year-old is making quite the impression in Qatar for England.

It is only ramping up his asking price as the young midfielder’s future at Borussia Dortmund continues to come under question, with Premier League giants circling.

Liverpool, Manchester City and Manchester United are all understood to be interested in the phenomenal young talent along with Real Madrid.

United though looks to have suffered a significant setback in its bid to sign Bellingham, with reports overseas claiming the Red Devils are all but out of the race for his signature.

LIVE UPDATES: All the latest as Brazil dominate South Korea in Round of 16 game

“Bellingham is under contract until 2025 and he has no release clause unlike Erling Haaland did.

“They’re already planning for his summer exit in 2023, Dortmund would be fine with him leaving because they are confident in getting a transfer fee between €100m-€150m ($A157m-$A235m).

“According to our sources, Liverpool, Man City and Real Madrid are his main options right now with Jurgen Klopp pushing for his move to the Reds.

“From what we are hearing, Bellingham is his number one transfer target next summer.

“Man Utd, on the other hand, they seem to be out of the race and don’t stand a chance at this point.”

Bellingham’s outstanding display in England’s 3-0 World Cup win over Senegal announced the 19-year-old’s arrival among the global elite but now comes the biggest test so far of his young career.

Much will be expected of the supremely talented central midfielder when Gareth Southgate’s side face world champions France in the quarter-final in Qatar.

Bellingham helped create the opening two goals as England swatted aside Senegal in the last 16 on Sunday and the teenager delivered a fine all-round performance that left seasoned observers searching for superlatives.

“I think he’s a fantastic player. He has everything with and without the ball, presses really well, gets around the pitch, tackles,” said captain Harry Kane.

“With the ball he can run, he can take players on, he can play a through-ball and as you saw today he was really important with our goal,” said the England striker.

“I like Jude a lot, he’s a really good person, he’s mature for his age and he’s got great leadership skills as well,” Kane added.

High praise indeed, but it is unlikely to go to his head — Bellingham is accustomed to accolades and well used to defying age expectations.

When he was sold to Borussia Dortmund for a reported fee of 25 million euros he became the most expensive 17-year-old in the history of the game and promptly became the German club’s youngest scorer.

He became a full England international in November 2020, with only Wayne Rooney and Theo Walcott having played for the country at a younger age.

At last year’s Euros, Bellingham became the youngest England player to have played at a major tournament and, at that time, the youngest player from any country to have featured in the European Championship.

“I’ve not seen a young midfielder perform like that for years,” former Manchester United midfielder Roy Keane, now a television analyst, said after the Senegal match.

“Usually you see that from a world-class player who’s 26 or 27. Everything he does in the game… we talk about his physicality, but it’s what goes on in his brain. He’s got that maturity and decision-making.”

Keane, who is notoriously hard to impress, added that “the kid has everything”.

This World Cup is only going to increase the interest among the top teams in Europe — and drive up Bellingham’s price.

Another former United captain-turned-pundit, Gary Neville, was impressed by the way Bellingham has coped on the biggest stage without any hint of being overawed.

“It’s the maturity and fearlessness that I can’t get my head around. I watched England players play for England for many years and the weight of the shirt was enormous,” said Neville.

“He just doesn’t feel it all, he looks like he belongs out there.”

It is a sign of the confidence England have in Bellingham that against Senegal he was chosen to be left back to cover the defence when the central defenders advanced for a corner.

Southgate, who has consistently been willing to give opportunities to young players, admitted that even he has been taken aback by the speed of Bellingham’s development.

“I don’t think we could have predicted how quickly Bellingham could mature. In the last five months that has gone to another level,” he said.

But now comes the real test at the World Cup for Bellingham and England, against Didier Deschamps’ world champions France and their outstanding striker Kylian Mbappe.

It is a challenge Bellingham believes he and England can rise to. “We’ve shown we can score goals, we can be clinical when it matters,” said the teenager.

“We scored at really good times and we showed we can keep a clean sheet again. If we want to win the next one that will be really important.”

It will indeed. But just as important for England will be whether their wunderkind can step up once again.