Conquer a New Threat in Sniper Elite 5 – Plus, a Free New DLC for All Players – Xbox Wire

Rebellion is celebrating its 30th anniversary and we would like to share our celebrations with you, our gaming community. We are pleased to announce that all Sniper Elite 5 players, including those playing through Xbox Game Pass, will receive an awesome free content drop called Airborne Elite today as a gift from us.

At Rebellion we are proud of our British heritage and the Airborne Elite Pack reflects that by providing you with some iconic British content.

Firstly, we have a classic British bolt-action rifle, the Lee No. 4. With great stability and accuracy, the ergonomics of the Lee No. 4 allow you to lay down rapid fire shots thanks to the ‘minute man’ grip – a special way to hold the rifle that allows you to reciprocate the bolt incredibly quickly to keep firing. An extremely versatile and useful addition to your arsenal.

You will also receive a number of attachments, including a rare 20-round extended magazine for extra ammunition and an ultra-lightweight 5-round internal magazine adding to the accuracy and mobility.

Finally, you will also receive a Union Jack weapon skin for the Welrod to give your pistol the most British of looks!

We hope you enjoy the free content and here’s to 30 more years of Rebellion!

As well as the Airborne Elite Pack we have also just released the final content drop from Season Pass One, including a brand-new mission entitled Conqueror.

Available as part of Season Pass One, or to purchase separately, Conqueror sees Karl sent to the town of Falaise where the retreating Nazi forces are making their last stand surrounding the castle that was once occupied by William the Conqueror. The mission requires you to breach the castle walls to take out the Nazi General and allow the Allied forces to claim victory. There’s a great mixture of sniping and close quarters combat to be had as you sneak your way up to the castle. We think you’re going to love it.

You will also receive the bombastic Drilling Shotgun as part of the Conqueror Pack. This Triple-barrelled Luftwaffe survival shotgun is devastating at close range and, when using slug shells and the correct ironsight, is also effective at distance. It’s certainly a great ‘get out of jail’ card for those times when your planning goes array.

The pack also includes the Oak Leaf Paint Weapon Skins to give your weaponry a great new look that will help you blend into the undergrowth.

Finally, as a bonus we are also giving players a new free Survival Map called Tide of War. This takes you back to the Atlantic Wall setting of the first campaign mission and the beachfront town of Colline-Sur-Mer. The new map offers a varied environment that can be used to your advantage but also to your detriment if you’re not careful. There are wide open spaces such as the sea front and the sand, but also confined streets and inland areas which can come in useful for flanking any enemy vehicles. To play Tide of War just make sure your game is updated and head to Survival Mode to see how many waves you can fight off.

Well, that’s it for our latest intel drop. We hope you continue to enjoy Sniper Elite 5 and you can always keep up to date with all the latest news from the studio on our social media channels. 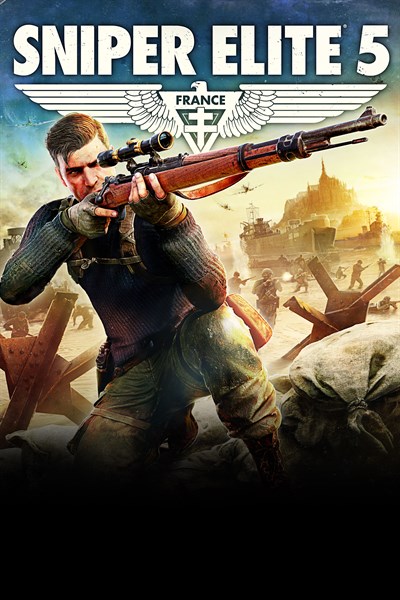 The latest instalment in the award-winning series, Sniper Elite 5 offers unparalleled sniping, tactical third-person combat and an enhanced kill cam. Fight your way across the most immersive maps yet, with many real-world locations captured in stunning detail, and an improved traversal system that lets you explore more of them than ever before.
France, 1944 – As part of a covert US Rangers operation to weaken the Atlantikwall fortifications along the coast of Brittany, elite marksman Karl Fairburne makes contact with the French Resistance. Soon they uncover a secret Nazi project that threatens to end the war before the Allies can even invade Europe: Operation Kraken.

EXPANSIVE CAMPAIGN
Many real-world locations have been captured using photogrammetry to recreate a living, immersive environment, and multiple infiltration and extraction points and kill list targets provide a whole new perspective on each mission. Take on the Nazi plot solo or work with a partner, with improved co-op mechanics allowing you to share ammo and items, give orders and heal each other.

ADVANCED GUNPLAY PHYSICS AND TRAVERSAL
Use ziplines, slide down slopes and shimmy along ledges to reach the perfect vantage point, or to sneak past a sharp-eyed lookout. Factor in rifle stock and barrel options along with gravity, wind and heart rate while you line up your sights on the target.

HIGH CALIBRE CUSTOMISATION
Use workbenches to customise and upgrade virtually every aspect of your weapon – change scopes, stocks, barrels, magazines and more. Rifles, secondaries and pistols all have a huge variety of options. On top of that you can select the ammo to suit your target, from armour-piercing right down to non-lethal.

INVASION MODE – CAMPAIGN DROP IN PvP AND CO-OP
Invade another player’s Campaign as an Axis sniper and engage in a deadly game of cat and mouse, providing a new dimension to the challenge as you stalk your prey. Alternatively, as Karl you can call for assistance and have a second sniper drop in to help you out of a tricky situation.

TENSE ADVERSIAL MULTIPLAYER
Customise your character and loadout and earn XP, medals and ribbons as you take on intensely competitive 16 player battles that will really test your sharpshooting skills. If co-op’s more your style, you can team up with up to 3 other players against waves of enemies in Survival mode.