Bring on 2026: How the Socceroos could line up at the next FIFA World Cup 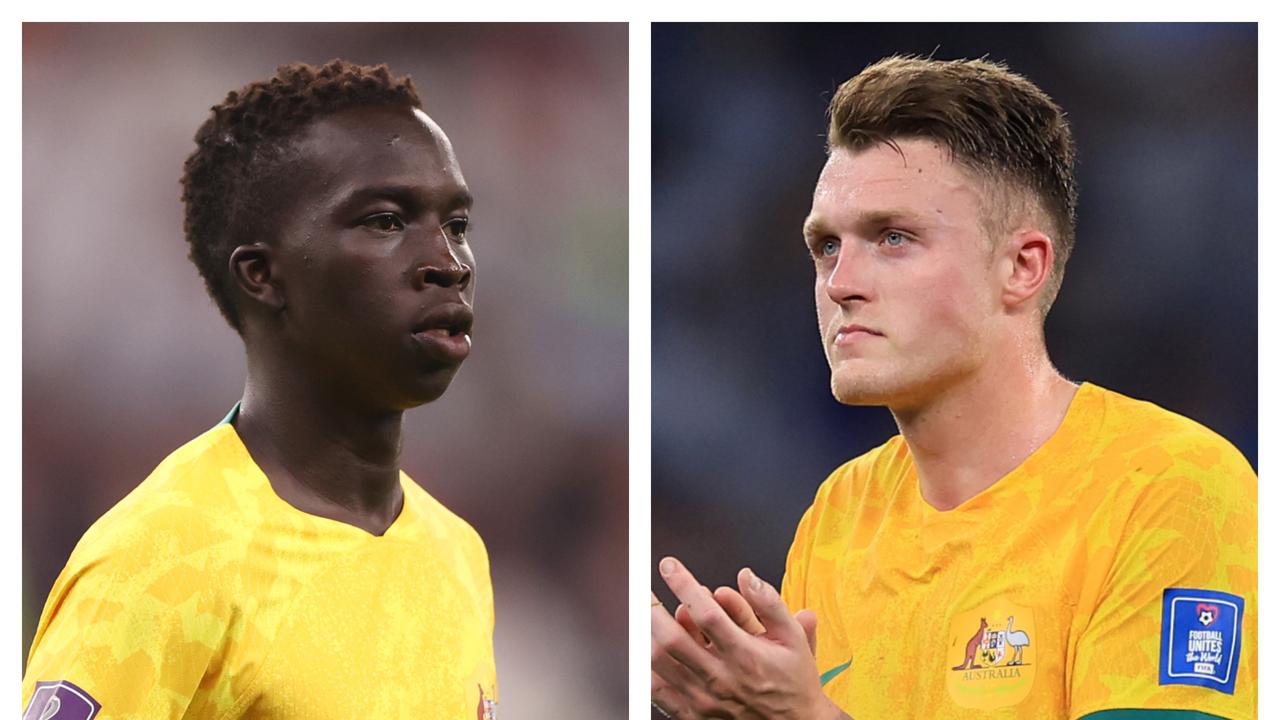 The dust hasn’t yet settled on the Socceroos’ most successful men’s World Cup campaign – indeed, the players only touched down in Australia last night – but the incredible performance in Qatar already has fans dreaming of what could be in the future.

The emergence of young talents – from the centre-back pairing of Harry Souttar and Kye Rowles to the flourishing starlet Garang Kuol – means the future is bright.

And the next World Cup, shared between three hosts in the USA, Canada and Mexico, is just around the corner.

Qatar’s harsh climate meant the Cup was pushed back to November-December for the first time in history. In 2026, it is set to return to the usual June-July timeslot.

That means there are just three and a half years between tournaments – meaning older players might have more reason to hope for one last trip to the biggest stage in football.

Here’s a far-too-early look at how the Australian squad could look in 2026, and the talented young guns who could break through on the way.

Goalkeepers typically have far more longevity than outfielders – and that’s the case in the World Cup, with 40-year-old Mexican keeper Alfredo Talavera the oldest player in Qatar.

By that mark, Andrew Redmayne could comfortably retain his back-up role in 2026 at the age of 37, while Danny Vukovic, who will be 41, is probably out of the hunt. Mat Ryan will be 34, giving him a more-than-reasonable chance of adding to his Australian record-equalling tally of 10 World Cup matches.

When he announced his World Cup squad last month, Arnold revealed a concern over the next generation of glovemen, saying: “Because at the end of the day, there is a lack of depth of goalkeepers … We need more young goalkeepers going through.”

This tournament’s surprise snub, Mitch Langerak, will be 37 when the next Cup rolls around and could still get a chance as a back-up.

But there’s no doubt that the Socceroos have to blood the next generation in the coming years.

Adelaide United’s 22-year-old Joe Gauci and 24-year-old Tom Glover have both impressed for the Olyroos and appear to be the leading candidates playing in Australia. 22-year-old Jacob Chapman (on loan at fourth-tier English side Salford City from Huddersfield Town) is highly-rated, as is 20-year-old Nicholas Bilokapic, who has already earned a senior appearance in the FA Cup for the Terriers. 23-year-old Charlton Athletic’s Ashley Maynard-Brewer is another super-impressive talent.

In the next four years, the Socceroos will surely look to the long-term future at the position.

World View: How ‘honest’ Aussies made football shut up and take notice

‘I’m not surprised’: Ryan hits back after club teammate’s brutal sledge over howler

Probably the easiest position to lock in based on the evidence at this World Cup! Harry Souttar and Kye Rowles stunned the world with their impressive partnership for the Socceroos, starting together in all four matches in Qatar.

Souttar’s height and passing range, plus having a rare left-footer in the heart of defence in Rowles, made them a formidable duo – and with both being 24 years old, they could well be the starting duo at the next two World Cups, not just 2026. But the next tournament should see them at the peak of their powers.

Thomas Deng, 25, offers versatility thanks to his capabilities at fullback – something 28-year-old Milos Degenek also did brilliantly when he featured at right back against Denmark and Argentina.

Degenek has grown into a key leader of the squad and set the standard with his determination and intensity on the field, and his vast experience could see him kept in the squad on the road to 2026.

30-year-old Bailey Wright is probably on the cusp in terms of age and fitness, the same as a pair of players unlucky to miss out on a trip to Qatar: Trent Sainsbury (61 caps) and Harrison Delbridge (1).

And there is no shortage of talented youngsters coming through the ranks ready to take over.

23-year-old Jay Rich-Baghuelou is a towering defender in the mould of Souttar – albeit just 1.96m tall. He impressed with the Olyroos at the Tokyo Olympics and has since left Crystal Palace for League One side Accrington Stanley. 23-year-old Gianni Stensness is on a meteoric rise, now in Norway, and his versatility as a centre-defensive-midfielder makes him one to watch out for in the future.

The Socceroos are also hoping to poach 19-year-old Alessandro Circati, born in Italy but raised in WA. The youngster is starring in Italy’s second division and has represented Italy at the youth international level, but has not yet decided his international future.

In Australia, 20-year-old Jordan Courtney-Perkins (Brisbane Roar on loan from Raków Częstochowa) is a rising star and could break through down the line, like 20-year-old Alexandar Popovic of Adelaide United.

Aziz Behich had the tournament of his life in Qatar, and the veteran nearly scored the best goal of his life when he embarked on a Messi-like run against Argentina only to have the ball poached a millisecond before he could fire home. However, he’s 31, and 2026 is likely too far down the track. 22-year-old Joel King is next in line, and has been on track for years to take over at the position.

Callum Elder, 27, is a more battle-hardened figure who continues to impress in England’s Championship with Hull City.

Down the line, 20-year-old Jordan Bos of Melbourne City looks a promising talent, while Mariners youngster Jacob Farrell (also 20) looks set to be the next cab off the rank in the incredible production line of players from the Central Coast.

Entering Qatar, this position was one that seemed most locked-in for the future. Fran Karacic will be 30 and Nathaniel Atkinson 26 (until his birthday mid-tournament!). Ryan Strain – who was unfortunate to miss out on this tournament – is just 25 but continues to improve and could leapfrog one of the pair.

22-year-old Lewis Miller earned a move to Scotland with Hibernian in June after his impressive performances for the Central Coast Mariners, and continues to progress in the tough, physical league.

His successor in Gosford, Jacob Farrell (20), looks equally likely to go on to big things.

Callum Talbot (21) is another of the leaders of the emerging crop down under, and looks a future star at Melbourne City.

Australia has an embarrassment of riches in this position – but how many will stick around in 2026? Aaron Mooy will be 35, Jackson Irvine 33. There’s no doubt that players can shine well into their thirties in the modern game, but taking both is unlikely.

Keanu Baccus was one of Australia’s breakout stars in Qatar when he got his chance against Denmark and Argentina. He’ll be 28, the same age as Cameron Devlin (in fact, they share a birthday!). Devlin, who was in the squad but unused in Qatar, and Connor Metcalfe, who was unlucky to miss out on a World Cup place, will be 27. All three appear locked in as the next generation of midfield talents, alongside Denis Genreau (who will also be 27). Louis D’Arrigo will be 25 and also offers plenty in the defensive midfield slot, while 24-year-old Melbourne Victory star Jake Brimmer is rapidly rising up the charts in the central midfield role.

In a more attacking playmaker role, Riley McGree was exceptional in Qatar and will be 27 when the next tournament comes around, and Ajdin Hrustic 29. Hrustic was Australia’s best in the qualification road to Qatar, but an injury pre-tournament robbed him of a starting spot. Both look set to continue their battle for the No. 10 role moving forward.

Tyrese Francois (on loan from Premier League club Fulham) will be 25, while Roma’s Christian Volpato – should he choose Australia over Italy – will be 22.

And there’s another name who Australia will likely face a brutal eligibility battle over – Alex Robertson. Robertson is eligible to play for Scotland, Peru, and England – where he is on the books at Manchester City. His father and grandfather have both represented Australia, but Robertson has played in a number of English junior international teams. If the Socceroos can win the fight for his international services, he could prove the next junior sensation.

Tom Rogic, who missed out on this tournament, will also be 33, but his chances look slim. But on the other end of the spectrum, Cam Peupion – chasing a Premier League debut with Brighton – is just 20 years old and could well become Australia’s next breakout midfielder.

Fellow 20-year-old Caleb Watts has already picked up three Premier League appearances and is now on loan, but could quickly shoot into contention.

Meanwhile, playing in Australia, 21-year-old Calem Nieuwenhof of the Western Sydney Wanderers is one to keep an eye out for as he continues to come on in leaps and bounds.

We’d be silly not to start with Garang Kuol, the 18-year-old who came oh-so-close to scoring an equaliser against Argentina in the dying seconds of stoppage time. He’s about to head to Premier League heavyweights Newcastle, and his future is bright. Marco Tilio is 21 and has plenty of potential, and should continue to grow.

Mat Leckie is 31 and in immense physical condition, but the three-and-a-half year gap to the next World Cup throws his spot into doubt. The same is true of 29-year-old Martin Boyle, who was cruelly sidelined in Qatar through injury. There’s no doubting his ability, but the big question will be how his recent knee surgery impacts his physicality in the long run. Fingers crossed. Craig Goodwin, at 30, is also on the cusp.

But Awer Mabil is in his playing peak at 27 and will be hoping to maintain his place in the squad moving forward, especially as a leader to the young group of emerging players like Kuol. In Australia, 24-year-old Reno Piscopo is another one to watch.

Perhaps the most intriguing bolter would be Daniel Arzani, who was the Socceroos’ youngest star in a breakout 2018 World cup performance only to walk down a rocky road afterwards. Now back in Australia, the 23-year-old still has his best years ahead of him.

Perhaps the most difficult area to predict. Mitch Duke is 31, Jamie Maclaren 29, and Jason Cummings 27. There aren’t any strikers banging down the door (or banging in the goals) in the frame to immediately jump into the Socceroos squad.

Nevertheless, there are a number of talented players who could become crucial players on the road to 2026. In Australia, the versatile Chris Ikonomidis is 27 and has 17 international caps. 24-year-old Nick D’Agostino has impressed for the Olyroos and has plenty of room to grow, but has struggled for consistency so far in his career. Western Sydney Wanderers striker Kusini Yengi has pace to burn and is just 23.

Perhaps the most exciting prospect is Alou Kuol, Garang’s older brother. The 21-year-old currently plays for the reserve team for German first-tier club VfB Stuttgart – and has boundless potential. The prospect of him lining up in the green and gold alongside his younger brother is an enticing one – and more than possible. They might not even be the only fraternal bonds shared among Socceroos!

The Toure trio of Mohamed (18), Al-Hassan (22), and Musa (17) – all forwards – are all extremely promising young talents. Al-Hassan and Musa both play in Australia, while Mohamed has joined French first-division club Stade de Reims and currently plays for their reserves.

The future is blindingly bright – it’s just a matter of who lives up to their potential.