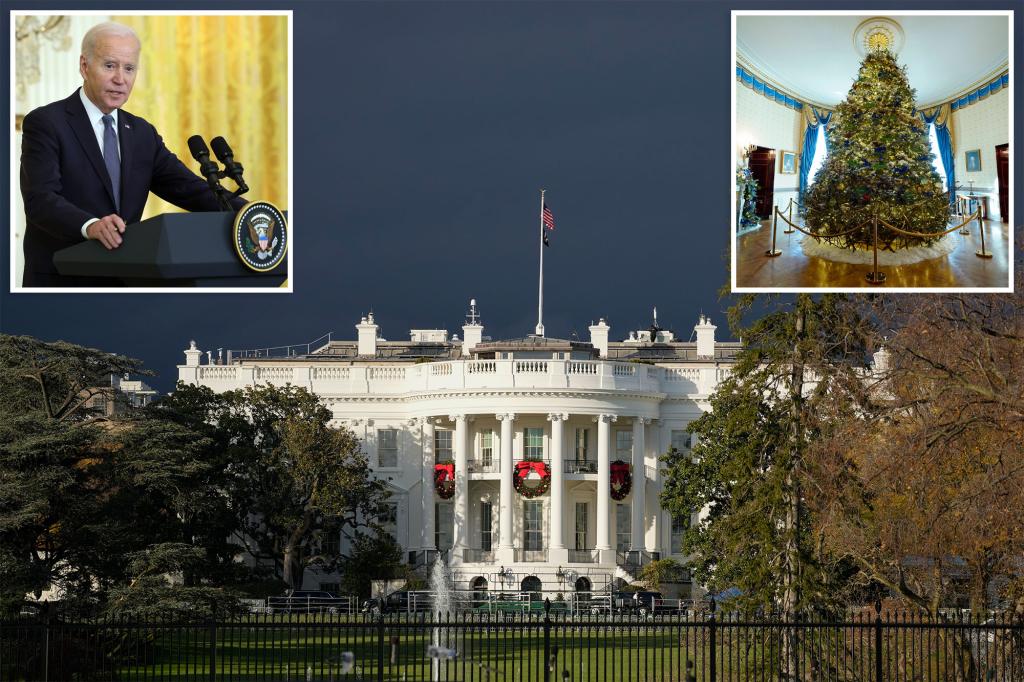 President Biden is facing an outcry from the White House press corps for the “petty” exclusion of journalists from the traditional presidential media Christmas parties.

In a seeming break from Biden’s pledge to restore “civility” to public life, a number of journalists — many believing themselves excluded for “naughty” rather than “nice” coverage — didn’t get invites to the glam soirees on Dec. 8 for TV teams and on Dec. 13 for other press.

The holiday fests are prized perks of the beat for media that cover the White House because attendees can bring a guest and usually score a photograph with the president while sipping eggnog in the grand rooms on the main floor of the White House.

The Post, which published bombshell documents from first son Hunter Biden’s laptop, was among the outlets snubbed — but got a belated invite Monday evening after requesting comment for this article.

One veteran White House reporter told The Post, “How many acts of petty blacklisting does this White House have to commit against accredited members of the news media before a consensus forms that President Biden is neither a champion of a free press, as he so frequently claims, nor a man of decency, as his supporters claim on his behalf?”

Another veteran White House correspondent, who also spoke under the condition of anonymity, said their outlet was regularly invited to Christmas parties dating to at least the George W. Bush administration and that the snubs should be seen in a broader context after repeated press access issues under Biden.

“Out of his mouth, Biden espouses that the free press is the bedrock of democracy and he supports a free and independent media and it’s important for us to makes sure that governments are held accountable. But it only seems to apply for governments outside the United States,” the longtime reporter said.

The correspondent added, “This guest list is an example of how the White House is kind of taking punitive measures against journalists that are simply doing their job exactly as the president says, or claims, he supports and that’s what’s most infuriating, It’s doublespeak and it’s pure hypocrisy in my view.”

Another veteran reporter said, “Engaging in petty partisan holiday invites is a sign of weakness, not strength… apparently this White House now has total disregard for protecting even the veneer of its promised transparency and respect for a truly free press.”

Journalists representing a wide range of news outlets that have permanent seats in the White House briefing room found themselves without invites and the White House would not share how the guest list was assembled.

A White House spokesperson said: “We’re thrilled that, for the first time in five years, reporters will be welcomed back to the White House over the holidays. We have worked to be as inclusive as possible and expect to host hundreds of reporters from more than 150 outlets.”

Employees of some news outlets with opinion sections favorable to Democrats told The Post they were not invited, though journalists from outlets with conservative-leaning editorial boards seemed to be disproportionately impacted.

Many of the originally excluded journalists — some of whom got last-minute invites Monday — rarely get called on at press briefings with press secretary Karine Jean-Pierre and suffered from de facto blacklisting for indoor presidential events through much of 2021 through a since-rolled-back mysterious prescreening process.

Others impacted gave trouble to the press office this year, including with public complaints about reopening access to events or testy briefing-room questions for Jean-Pierre.

Veteran correspondent and author Brian Karem, who writes for left-leaning Salon, said sarcastically, “What better way to pass on the tidings of blessings than to deny it to those who you dislike.”

Karem drafted a press corps protests letter in June that demanded in strong words an end to the murky prescreening of reporters let into Biden’s events. Journalists repping about two-thirds of briefing room seats signed that statement.

“I consider it as a great compliment that I am as apparently unliked in this administration as the last. I wish the administration all the best this holiday season. Good will to all,” Karem told The Post. “I feel warmed by the spirit of the season of peace on Earth and good will towards all in knowing that it doesn’t extend to all of us.”

Former President Trump held a press Christmas party during his first year in office, but didn’t pose for photos and opted not to host another in 2018 and 2019 as he trashed the press as “fake news” and the “enemy of the people.” COVID-19 prevented the festivities in 2020 and 2021.

New York Times reporter Peter Baker, who has covered the White House since the Clinton administration, said that there’s often at least some jostling for Christmas party invites, but that reporters that regularly work from the White House usually are admitted.

“I don’t remember too many cases where working journalists who were there on a regular basis not getting invited, though I wouldn’t swear it didn’t happen,” Baker told The Post.

“My memory is that this is quite often a bit of an issue, who gets invited and who doesn’t, so it’s hard to make a straight apples-to-apples comparison without hard numbers,” Baker said.

“But if I remember correctly, those who actively show up in the briefing room were usually invited and the harder cases came among those who weren’t actually part of the day-to-day press corps, such as columnists, editors, bureau chiefs and people who used to come in the past but were less involved in the coverage anymore.”

Baker said that it’s possible the White House sought to limit attendance due to the COVID-19 pandemic, though party guests must get tested beforehand.

Some of the journalists snubbed this year took the disappointing news in stride.

Newsmax journalist John Gizzi, who has covered the White House since 2003, told The Post he didn’t get an invite this year, but that he has fond memories of going to presidential Christmas parties — bringing almost a dozen family members, one at a time.

“My wife so liked it that [first] year that she said, ‘I have to share this with others.’ So thanks to her, I was able to bring my mother and father, her two sisters, her sister-in-law, niece and one of the sisters’ husband,” Gizzi recalled.

So far as Gizzi was aware, all reporters with a permanent press badge were invited in the past. But Gizzi said that halfway through the Obama administration, he got trimmed from the guest list and went two years without an invite.

The longtime briefing-room figure was restored to the invite list by talking with Obama’s press secretary Josh Earnest about bringing Obama-supporting actress Janine Jackson as his guest.

“Do I have hard feelings? No, because that means I’d have to be an equal opportunity angry reporter at President Obama for the couple of years I was cut out… and then after that, Trump who had that one pro forma party and then had nothing after,” Gizzi said. “So who am I to complain about any president after I had the good memories there? If I get invited this year, it would be great to do it.”