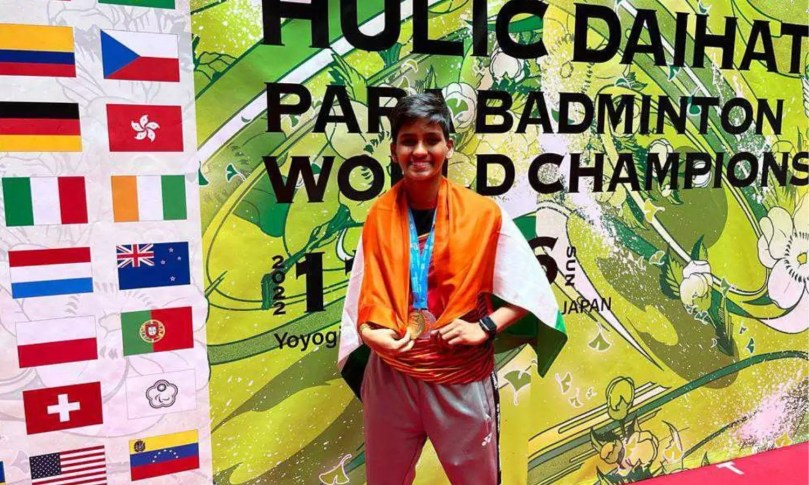 Best Para-Badminton Player: Young Indian shuttler Manisha Ramadass has claimed the BWF Female Para-Badminton Player of the Year award for her stellar run this season. The Badminton World Federation (BWF) on Monday named Manisha as the winner after the 17-year-old won the gold in the World Championships in the SU5 section. Overall, she claimed 11 gold and five bronze medals in 2022. Follow BWF World Tour Finals 2022 updates with InsideSport.IN

Bhagat, who claimed his fourth world championships singles gold this year, was among those short-listed for the BWF Male Para-Badminton Player of the Year but the award went to WH2 world champion and reigning Paralympic champion Daiki Kajiwara, winner of 10 gold and four bronze medals overall.

Congratulations to the BWF Player of the Year Awards 2022 winners! 🏆✨ pic.twitter.com/4aU452fjUL

The Japanese earned the nod ahead of Cheah Liek Hou, Lucas Mazur, Chu Man Kai, and Choi Jungman besides Bhagat. In the award for able-bodied shuttlers, Olympic champion Viktor Axelsen and Zheng Si Wei/Huang Ya Qiong’s extraordinary dominance this season was honoured as they won the BWF Player of the Year Awards in their respective categories.

Axelsen won BWF Male Player of the Year for sweeping nearly everything in his path during the eligibility period from November 1, 2021, to October 31, 2022, Axelsen won nine titles, including his second World Championships crown, which was achieved on the back of three consecutive World Tour titles, the BWF said in a report on its offical website.

The BWF Female Player of the Year was won by Japan’s Akane Yamaguchi, who achieved the rare honour of winning back-toback World Championships titles within a nine-month period. She also won two other titles – the All-England Open and the Japan Open. The other contenders were An Se Young and Tai Tzu Ying.

Fajar Alfian/Muhammad Rian Ardianto’s superb consistency through 2022, when they made eight finals and won four, saw them named the BWF Most Improved Players of the Year.

The Indonesians won the honour ahead of HS Prannoy and Jeong Na Eun/Kim Hye Jeong. Japan’s 21-year-old Kodai Naraoka, who had a meteoric rise in 2022, won the Eddy Choong Most Promising Player of the Year. Naraoka made four finals and won the Vietnam Open.