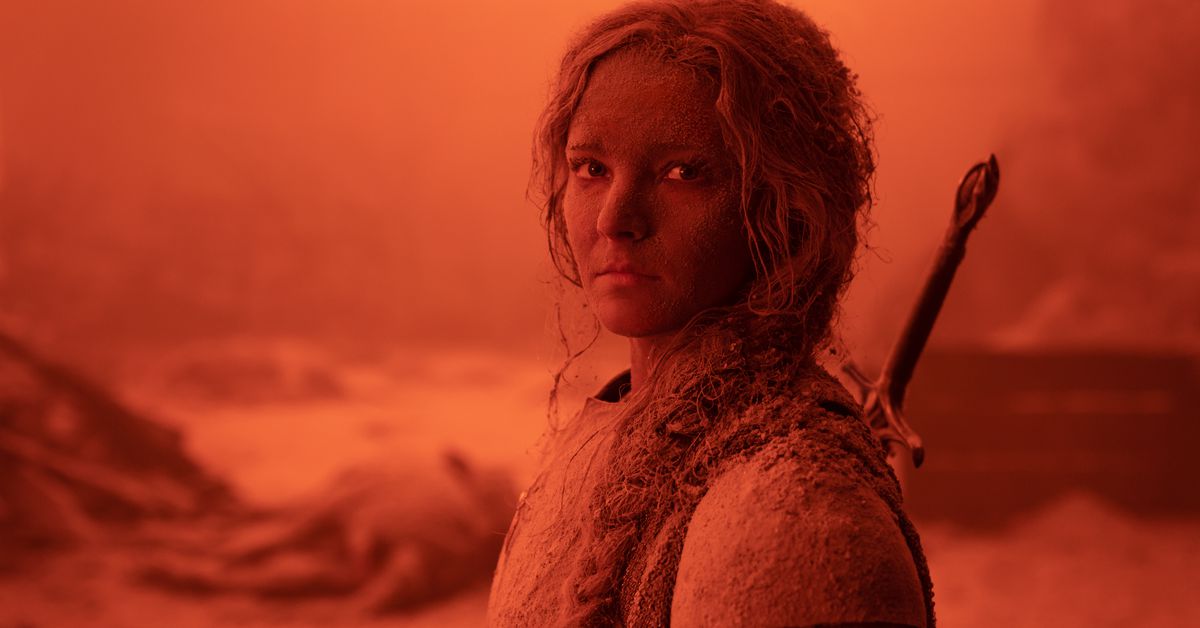 The climax of The Lord of the Rings: The Rings of Power’s first episode is a doozy. Weary warrior Galadriel spends the whole episode wrestling with a weighty decision, and in the final scene she makes a pivotal choice in a riot of light and music and ocean waters. It’s beautiful. It’s moving!

But also, what the heck just happened? Why was there all that light? This seems like a much bigger deal than just getting on and off a boat?

Sail west with us, reader, and we’ll unpack The Rings of Power’s brush with Middle-earth’s divinity.

[Ed. note: This article contains spoilers for The Lord of the Rings: The Rings of Power episode 1.]

If you’ve watched the episode, then you know: Galadriel spends the hour weighing her conviction that the great war isn’t over with Sauron still at large against her desire to return home to the Undying Lands across the sea. In the end, just as her fellow soldiers break out into a song of homecoming and the divine light of the land of the gods breaks upon their ship, Galadriel leaps overboard. She gives her home one last glance, and then turns and begins her long swim across an entire ocean back to shore.

Rings of Power shows all of this with only light explanation: It’s framed as a journey home, but without exploring much more of Valinor’s significance to elves in general, or to Galadriel and her kinfolk in specific. It may be that the show has more explanation up its sleeve, especially as it looks like Galadriel will be spending a bunch of time with human characters next — they’ll probably have questions about how she wound up in the middle of the ocean.

But if you just can’t wait, let’s unpack everything that’s going on here.

What is Galadriel giving up?

As typical for J.R.R. Tolkien, he had a lot of ways to refer to the Undying Lands, the mysterious elven homeland. If you want to talk about the continental landmass, it’s Aman. If you want to talk about the nation of elves and gods there, it’s Valinor. And if you just want to generally refer to all of that, you can call it the Undying Lands or just the West with a capital W.

Most of the elves in broader Middle-earth have never seen Aman, but they know it is a homeland the gods prepared for them, one they’ll move to eventually once they become weary of living in Middle-earth — and one their spirits will go to for resurrection if they ever die. But for Galadriel and her kin, a tribe called the Noldor, it’s something a little different. The Noldor have all actually been to Valinor and lived centuries among its splendor — Galadriel was even born there, as Rings of Power shows in its opening scenes.

In the beginning of the war of the elves against Morgoth, the Noldor left Valinor to seek revenge on the dark god for stealing the work of their greatest craftsman. The gods advised them not to, but they did it anyway, and in the process they got into a fight over boats that escalated into the first time elves had ever killed other elves. In punishment, the gods cursed the Noldor big time.

Under that curse, the Doom of Mandos, all the Noldor’s goals would turn to evil, the treasures they sought to retrieve would always slip from their grasp, and their quest would be marred by duplicity and betrayal even from their own kin. They were banned from returning to Valinor forever, but also cursed to grow quickly weary of the wider world and yearn for a home they could never see again.

By the time Morgoth had been defeated, most of the Noldor had died violently one way or another, but in recognition of their help, the gods pardoned any of the Noldor who stood against Morgoth. That’s why Galadriel’s soldiers are so strident about setting aside their task and returning from the field. They haven’t come back from the front since the war’s ending, and once they do, they can go home. They can unburden themselves of centuries of yearning under the Doom of Mandos.

But there’s an extra, personal significance of returning to Valinor for Galadriel. The final aspect of the curse was perhaps its most terrible: The Noldorin elves that left Aman would be denied their immortality, as Galadriel references in The Rings of Power when she says that her people had no word for death.

Wait, how does that work?

Elves are immortal, but not indestructible. If an elf is killed in battle, her spirit separates from her physical form and travels to a place in Valinor called the Halls of Mandos, overseen by Middle-earth’s god of the afterlife, a guy named (you guessed it) Mandos. His realm is a system of great caverns and underground chambers lined with god-woven tapestries depicting all of history.

Most elves are then given new bodies for their spirits to inhabit and join all the other elves living in Valinor. Some elves stay in the Halls for a while because their experiences — like violent trauma — can make them kind of tired of life for a while. And as in the Doom of Mandos, the gods can also just ban certain people from getting new bodies, forcing them to remain as sad, disembodied shades in the Halls of Mandos until the end of time.

Tolkien himself never settled on the reason that Galadriel stayed in Middle-earth after the Noldorin ban was lifted, which gives Rings of Power plenty of room to create its own. In these first episodes, it’s that Galadriel wants to finish the job her late brother started and put a stop to Sauron’s machinations. This doesn’t necessarily contradict with Tolkien either; Galadriel did have a brother, Finrod, who was captured by Sauron and died in the dark lord’s dungeons in single, unarmed combat with a werewolf, whom he also killed.

That’s not particularly relevant, but I just really wanted to mention the werewolf fight.

Until the lifting of the Doom of Mandos, Galadriel would have had no reason to hope that Finrod would never live again, not until the end of days when Middle-earth’s supreme god Eru Ilúvatar would destroy the world and restore it to his original perfect intention.

So Galadriel isn’t just giving up on going home and being relieved of divinely-inspired longing, like her kinsmen. She’s also giving up on seeing her brother again, at least for a good long while. No wonder it takes her until the very last minute to make her choice.

But why does Galadriel give up?

I can’t say for certain. But I did ask Galadriel’s actress, Morfydd Clark, for her take.

Clark said that a simple way of putting it would be that Galadriel doesn’t feel that she deserves to return to the elven promised land, because she has a responsibility to protect Middle-earth from Sauron. The difficulty of that decision comes from the longing for the Undying Lands in the west that all elves feel to at least some extent, even characters like Legolas and Elrond.

“There’s this Welsh word, hiraeth, that has no English translation,” Clark told me over Zoom. “It’s a yearning and longing for a place that you can never return to, almost a place that you might not even have experienced. Memories of your ancestors and things like that.”

As an example, she cited “Hiraeth,” by Welsh entertainer Max Boyce. The song’s single English verse goes: “Tell me then, you men of learning, why is hiraeth more than yearning? Why when darkness minds to hide me, hiraeth comes and sleeps beside me?”

But for Clark, Galadriel’s hiraeth for her homeland is balanced by her hiraeth for her responsibility. Galadriel fears that “if she goes back to Valinor without finishing what she was meant to do, the hiraeth will still be there. And that would be the most unbearable thing.”

A longing for more than simple heavenly existence was key to Tolkien’s vision for Galadriel, one of the most singular characters he created for Middle-earth, and Clark’s interpretation of Rings of Power’s improvisation fits the theme quite well. It’s hard to think of anything worse than being denied your destined place in heaven — except for being the only person in heaven who deeply longs to leave.