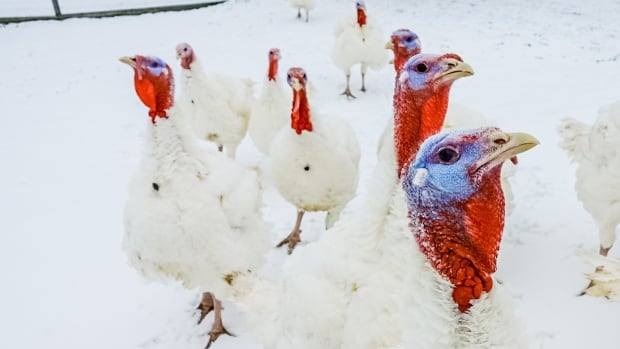 Avian flu is causing a turkey shortage in British Columbia, the B.C. Poultry Association said, warning it could pose a challenge for customers ahead of the high-demand Christmas season.

Association spokesperson Amanda Brittain said in an interview that the group is anticipating a 20 per cent drop in available turkeys compared to previous years.

“It’s a terrible time of year for this to have to happen,” she said.

“Some farmers have turkeys all year round, but Thanksgiving and Christmas are the primary consumption events for turkey, so it’s prime turkey-growing season right now and unfortunately they are being hit by avian influenza.”

Brittain said there are currently no shortages of eggs or chicken.

On Vancouver Island’s Saanichton Farms, operator Bryce Rasheligh said he has 50 fresh turkeys, which have already been purchased for the holiday season. Due to avian flu, he’s had to adapt his practices to keep the animals healthy.

“In some ways I’ve likened it to the COVID pandemic we’ve lived through … we just had to learn to be more careful and be more sanitary and just take more protocols in how we distance from each other. It’s no different for the animals,” he said.

Brittain said the spread of the virus has been unprecedented this year across North America and especially troubling during migratory seasons in the spring and fall.

“It started picking up again in the fall … [B.C.] got hit really hard with a number of infections,” she said.

Latest available data from the Canadian Food Inspection Agency (CFIA) shows 866,200 birds have been affected by the H5N1 strain of avian flu this year in British Columbia. It shows 43 currently infected premises in the province as of Wednesday, while 21 others have recovered.

Avian flu is spread through contact with an infected bird or its feces or nasal secretions. Farm birds that go outside are most at risk because they can come in direct contact with infected wild birds or their feces.

Humans can also inadvertently carry the infection into a barn on their shoes or clothing, but the agency has said no human cases have been detected in Canada and the illness is not considered a significant concern for healthy people who are not in regular contact with infected birds.

Jenn Hopcott with Hopcott Farms in Pitt Meadows, B.C., said she will be down about 250 turkeys from local producers at her butcher shop this season.

She’s been taking orders from customers, but tells them there is no guarantee she’ll be able to provide it.

“Even with the orders we have taken, it’s a bit of an unknown for another week or so. We have been communicating that with the customers.

“There’s a chance they might not be getting their turkey.”

It’s the same at Victoria’s Village Butcher, where operators are putting customers on waiting lists.

“Everything’s kind of up in the air right now. We don’t know what we are getting in,” said Aeron Bradley at the shop.

“We’re prepared to have a lot less than we normally do,” said owner Cory Pelan. He said it’s the first year in his experience that Vancouver Island farmers have not been able to provide the turkeys his business needs.

“It’s all avian flu right now. There’s a finite amount of product out there.”

Importing turkey for the holiday season could also be a challenge.

The CFIA has set restrictions on imports of live birds, bird products and by-products from U.S. states affected by the flu.

The U.S. Center for Disease Control said in a news release Saturday that more than 49 million birds in 46 states have either died as a result of bird flu virus infection or have been culled due to exposure to infected birds since early 2022.

The B.C. Egg Marketing Board has said about 80 per cent of the province’s 578 poultry farms are located in the Fraser Valley, which sits in the path of a main bird migration route.