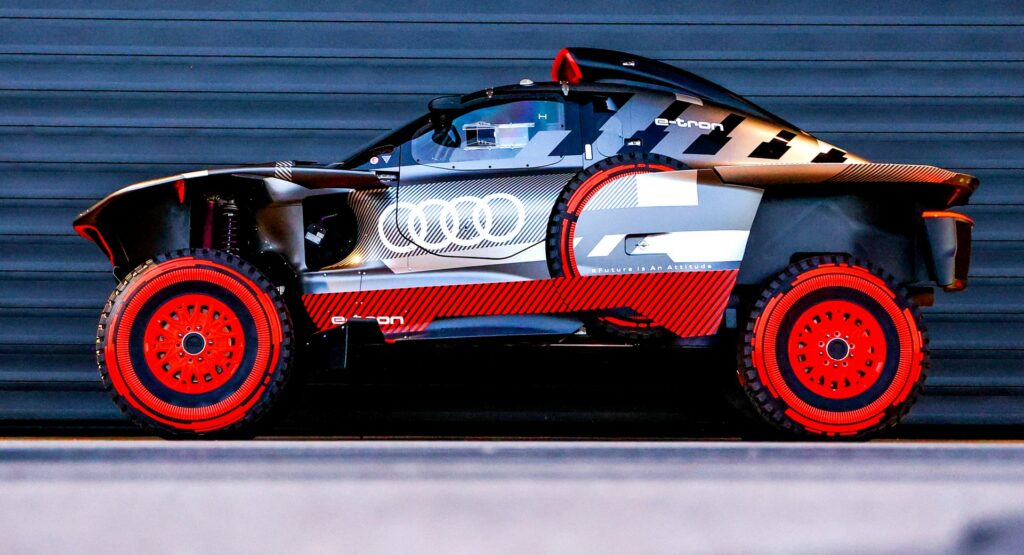 Audi has been busy stripping away everything that wasn’t strictly necessary from the RS Q e-tron E2, and has come out with the evolution of the off-road racer. A lightened, more aerodynamic, and simpler vehicle to use, Audi hopes it will earn it more wins in the dirt.

“We’ve managed a good debut at the Dakar with the Audi RS Q e-tron and even our first stage victories in a motorsport discipline that is new to us,” says Rolf Michl, Managing Director of Audi Sport GmbH. “The entire team is working excellently together and pulling in the same direction. As is usual at such an early stage, the drivers, co-drivers and technicians quickly agreed on the next development targets.” 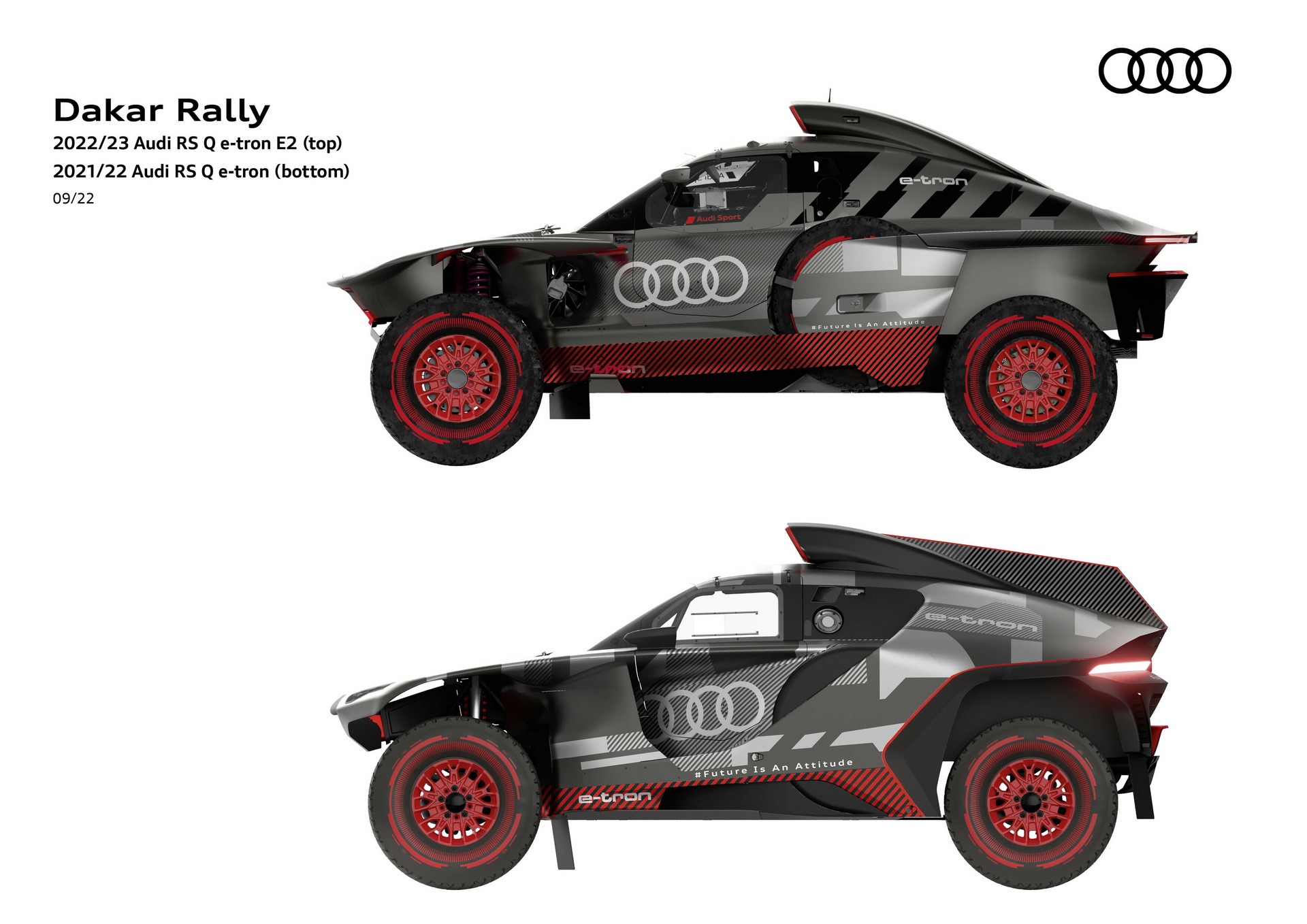 That meant stripping away all kinds of body work, specifically around the rear of the vehicle. The brand has also worked to optimize the way it lays the fabric layers of the composite for the body, contributing to an overall lighter structure, and the lowering of the vehicle’s center of gravity. It also makes it easier to reach the spare wheel, because there’s simply less bodywork in the way. The new model now measures 4,670mm (183.9 in.) long, 2,300mm tall (90.6 in.) and 1,950mm (76.8 in.) wide, making it nearly 170mm (6.7 in.) longer than the original RS Q e-tron.

The modifications also mean that the body is 15 percent more aerodynamic than its predecessor. According to Axel Löffler, the SUV’s chief designer, the E2 doesn’t share a single body panel with the first-generation RS Q e-tron.

That won’t help it hit a higher top speed, since it was always capable of reaching the regulation-limited top speed of 170 km/h (106 mph), but it does still offer a major advantage for the electrically-driven vehicle.

Further improving efficiency is the air conditioning unit. An important factor in desert racing, Audi found that the first-generation model’s A/C compressor was so strong that it would freeze the coolant when it was run for long periods of time. It has, therefore, reprogrammed the unit to run intermittently, saving power and cooling the car nearly as effectively.

“We have combined all the important lessons in a very short time. The result of our ideas is the E2 evolution,” says Uwe Breuling, Head of Vehicle Operations Audi Sport. “Our development team’s determined and cost-efficient work has prepared us perfectly for our second Dakar Rally.” 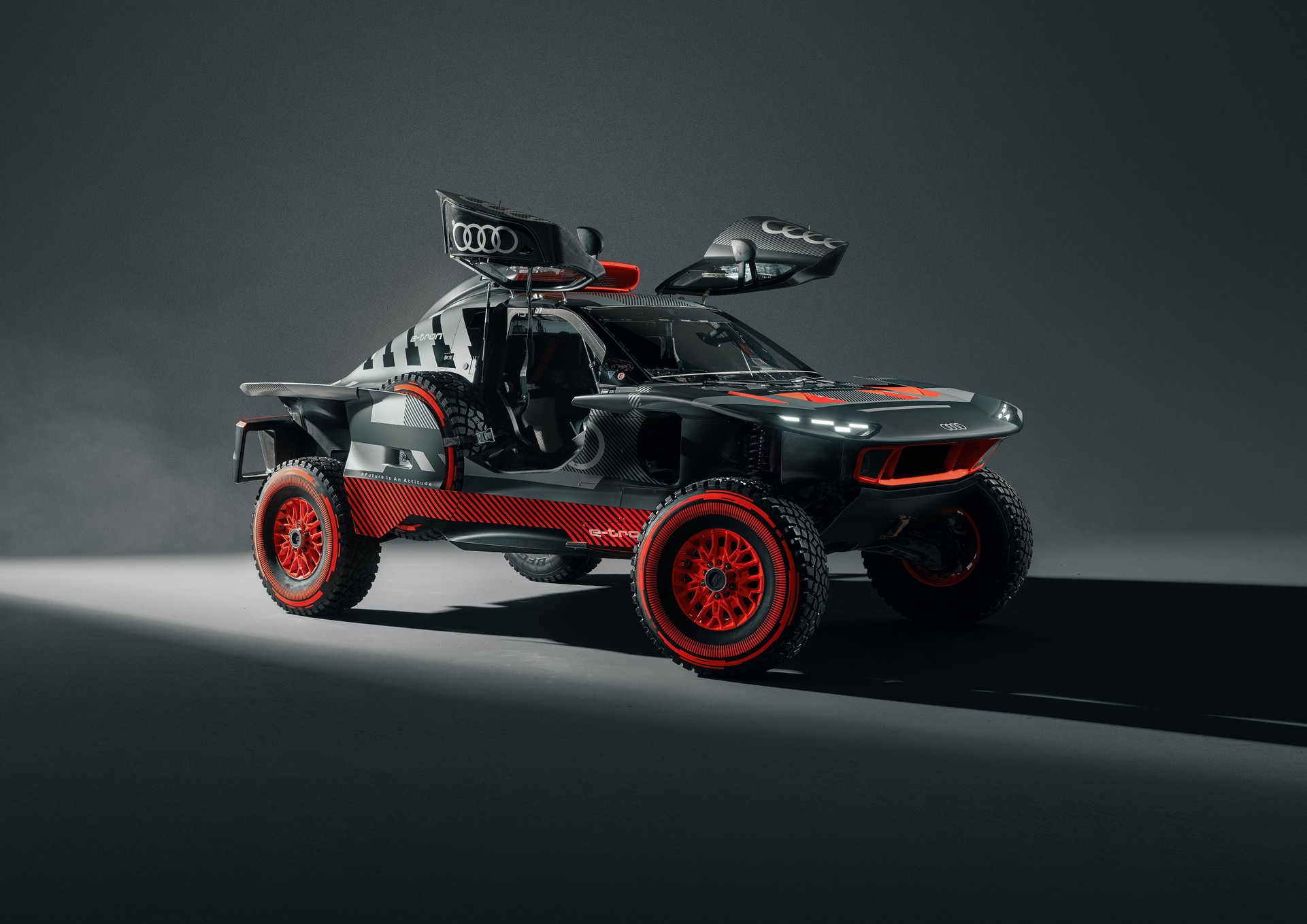 The E2 variant retains the original RS Q e-tron’s range-extender powertrain that combines a 2.0-liter turbocharged inline-four gasoline engine that charges a 50.0-kWh battery which in turn, feeds two electric motors, one on each axle producing a combined limited output of around 400hp, though they are technically capable of delivering a little over 670hp.

The Audi RS Q e-tron will make its competition debut at the Rally du Maroc from October 1 to 6 and will then compete at the 2023 Dakar Rally.