A good day in court, a faint political stirring 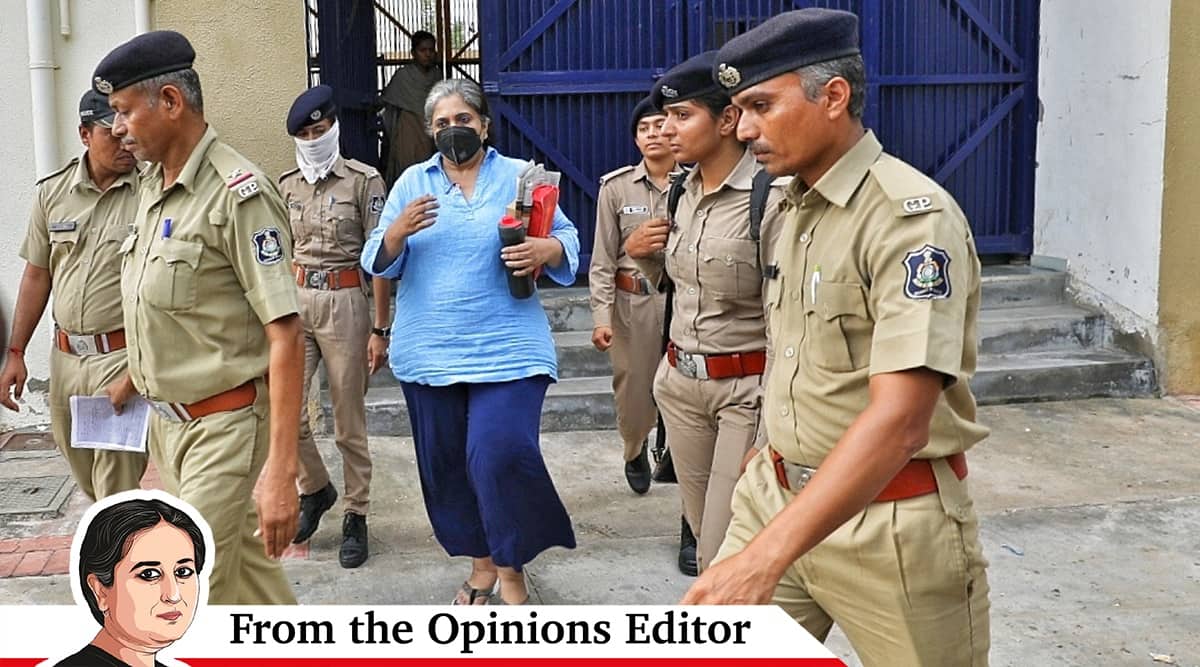 The week ended with the image of Teesta Setalvad, activist, in custody for 70 days for allegedly fabricating evidence in connection with the 2002 riots cases, stepping out of Sabarmati Jail, bearing a smile and a bag with a floral print in white and mauve.

The Supreme Court, which, for some time now, comes out, more and more, on the side of the government in cases that involve encroachment upon individual rights and freedoms, stepped into the matter this week. A bench led by the new CJI, UU Lalit, asked sharp questions of both the Gujarat High Court and the state, and granted Setalvad interim bail.

The bail is interim and Setalvad’s case will go on, independently, in the high court. But whatever its final outcome, the tone and tenor of the apex court’s interventions on Thursday and Friday sent out a heartening message — of the return of the watchful institution, applier of the check, restorer of the balance.

There are new stirrings in another space where activity had seemed to dim and dampen — to democracy’s detriment: The national Opposition. In Patna, a meeting over this weekend of the national executive and council of the JD(U) authorised Chief Minister Nitish Kumar to “devote full time” for “Opposition unity”.

Of course, Opposition unity is something of a mirage. And at the centre of the project this time is the flawed figure of Nitish — a leader who has changed sides more often than a single sentence can hold without becoming unwieldy. And yet.

This latest political experiment, scheduled to take off with meetings in the coming week between Nitish and other Opposition leaders, is not going to be another version of the Third Front. This is not a non-BJP and non-Congress politics that contrives equidistance from both. This time, the political line is being drawn more cleanly between the BJP and the Rest. One of the first calls that Nitish made when he took the decision to walk out of the BJP-led NDA this time was to Sonia Gandhi, despite the deep political revulsion he has often professed against Congress entitlement and arrogance in the past.

So far, since 2014, even as the BJP has notched serial electoral successes, it has also been helped along by the lack of resistance or pushback by the Opposition. With a full-time chief minister mandated by his party to also move, full-time, into the national Opposition space, that story could be changing.

In the national space, as in Bihar, Nitish’s great weakness could be his great strength.

In Bihar, a state where caste identity is politically salient, the fact that Nitish does not belong to a dominant caste has come to his aid in forming a larger alliance — Nitish’s community of Kurmis is too small in the caste matrix to threaten or alienate either the forward castes or the other backward castes, and this has helped him forge a coalition of extremes.

In the national Opposition space, which bristles with egos, another Nitish weakness could come to his rescue for at least striking a conversation with other leaders: His proven bendability. For all his achievements as “Sushasan Babu” since he became chief minister in 2005, and even when he was at the peak of his popularity in and around 2010, Nitish has been a leader supremely underconfident of going it alone, always seeking the coattails of an ally, and to that end, forever ready to bury past history or a grudge.

Could we be seeing the beginning of a real fightback against the dominant party, which is always good news in a lively democracy, taking shape? That question is raising its head, slowly though still faintly.

PS: A tribute to a teacher in this paper today by actor Adil Hussain — tomorrow, September 5, is Teacher’s Day — recalls a man who taught him to see and to listen, never telling him what to think or do.

Khalid Tyabji, who taught Hussain at the National School of Drama, took his student on a journey on a motorbike to different parts of the country, where they met “many people, faces, colours, rituals, customs, food, clothing, and behaviours of India”. At the end of two years of doing this, says Hussain, the teacher’s gift was the straining to look at truth from a billion perspectives.

That motorcycle journey, a million miles from the classrooms-with-CCTVs, must have been so exhilarating. Ahead of Teacher’s Day, it’s a reminder of what teachers can do, the powerful role they play in shaping students — and nations.